Every Monday morning I wake up to jot down my thoughts on the previous evening’s episode of Game of Thrones. During the show I take a few notes, though I like to sleep on the events before finalizing my ideas. If you’ve read during previousweeks, this column is not a recap as much as pulling concepts from each episode that broadly speak to our culture, and I try not to be too reactionary.

Sure, I’ve seen a few comments of people complaining, “Can’t you leave anything sacred? Do we have to politicize a show?” But that’s always been the function of great storytelling. No mythology is created in a vacuum. In order for the story to have relevance it must address timely issues. What could be more timely than climate change, immigration issues, and cults of inflated personalities?

Storytelling isn’t an escape from reality, it’s a deep dive into reality using highly imaginative metaphors and analogies. Two of the greatest war epics in history, the Iliad and the Bhagavad Gita, have lasted thousands of years because they speak directly to so many facets of the human condition. Both are, in parts, fantastical and biologically impossible, appealing to the same emotional mechanisms inside of us that love the impossible, such as dragons and zombies with serious javelin skills. 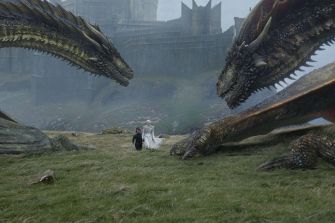 Yet if it were only fantasy these tales would leave us unfulfilled. Stories have to impact our understanding of the world around us or else they wouldn’t make sense. The great archer Arjuna’s existential crisis on the battlefield is one of the most pivotal moments in the Indian mythos because it also speaks to what the government expected of him: a player in the caste system expected to fulfill his role as an agent of the armed forces. Yes, Krishna says, you have to kill your cousins and friends. To justify his decree the godhead reminds Arjuna that he reincarnates humans like humans change clothes, another impossibility that plays to our penchant for essentialism—in this case there’s something inside of us, a soul, that lives on, alleviating the archer’s guilt.

The soul that truly lives on is the story, not the human. That’s how a wicked, power-hungry queen like Cersei, who destroys everything in her path, comes from the same tradition as the wicked, power-hungry goddess of magic, Circe, Homer’s homage to the Greek spinster. (In the Odyssey, Hermes militarizes Odysseus with a drug called moly to protect him from Circe’s magic; draw your own parallels there.) Themes repeat even as actresses are replaced. 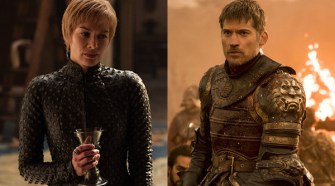 Game of Thrones is a modern mythology. The media we use to tell stories today are quite different from shlokas and dactylic hexameter. In this case it’s not the medium but the message that matters. What’s reincarnated throughout time is this need to communicate to one another to remind us of our place in this world. In Myth and Reality, the Romanian scholar Mircea Eliade writes:

To know the myths is to learn the secret origin of things. In other words, one learns not only how things came into existence but also where to find them and how to make them reappear when they disappear.

Literary scholar Jonathan Gottschall understands this necessity of narrative. Humans are, in his words, storytelling animals. Through stories we define ourselves as individuals and cultures. Those who came before us help to shape our sense of self through the stories they tell. What they tell we repeat and remix for our own purposes.

In The Storytelling Animal, Gottschall writes that narrative “suggests that the human mind was shaped for story, so that it could be shaped by story.” Religion, philosophy, economics, societies, governments—everything is a story we tell to convince ourselves of our place in the world. We reconfirm our beliefs by reiterating these stories, over and over again, until they become the lens through which we view reality. We pass down traditions to our children, who borrow the essence while translating them to suit their own needs. Life perpetuates through narrative as much as genes.

Which is why Game of Thrones has become such a phenomenon. In a time of binge watching and endless choice, it is the single show millions of people discuss in real time on social media. When I was growing up in the eighties, the next day at school often involved discussions about the previous evening’s shared experience. Miss it and you have no voice. That’s why I don’t get choked up when people complain about online spoilers. Don’t log in if you’re not ready to discuss. Game of Thrones is probably the only show in which this is still the case.

And it’s also why we’ll tune in next week even given the overt stretching in episode six. In classical mythologies it was not unusual for characters to appear out of nowhere to fulfill a singular role, regardless of how illogical it seemed. Enter Uncle Benjen. Having Bran warg into Jon Snow’s sword Longclaw (did you see its eyes open?) to contact dear uncle feels too convenient. Maybe the writers believed they needed to make Jon and Dany’s hand holding more dramatic, but the route there seemed forced.

C’est la vie. Some series have fizzled out from too many complicating and competing storylines (Lost) and some just lost steam (Mad Men) while others kept focus for many seasons (Breaking Bad) and other still knew when to end (The Leftovers).

Death is inescapable, Beric reminds us, but still we fight. The end of this story is near. There will be carnage we’ll love and that which we won’t, and no two of us will agree on the finality. But one thing is certain: we’ll keep watching, so essential is the story to us.

Derek is the author of Whole Motion: Training Your Brain and Body For Optimal Health. Based in Los Angeles he is working on a new book about spiritual consumerism. Stay in touch on Facebook and Twitter.

The forgotten voyagers of ancient Greece, China, and Scandinavia

Why the south of Westeros is the north of Ireland

As Game of Thrones ends, a revealing resolution to its perplexing geography.
The Past

Archaeologists Might Have Discovered St. Nick’s Remains in a Hidden Tomb

Gulp. Is that you, Santa?
High Culture

Neil deGrasse Tyson Tackles the Science of Game of Thrones

Neil deGrasse Tyson, famous in part for using his scientific literacy to point out flaws in TV and movies, recently criticized the good and bad science behind HBO’s Game of Thrones.
Thinking

Don’t settle for comfortable and familiar thoughts, reach for what you don’t know, says Harvard professor Stephen Greenblatt.
▸
7 min
—
with
Stephen Jay Greenblatt
Up Next
Starts With A Bang

It’s a great show in total darkness. Here’s how to not ruin it for yourself.“Yes, I am well aware that nature — or what we call nature: that totality of objects and […]