An estimated 40 million Americans fill out an NCAA men’s basketball bracket every year, making the “March Madness” tournament one of the biggest draws in sports. These 40 million people will wager about $9 billion. Yeah, that’s a lot of money on the table if you pick a perfect bracket (more on that later).

So how do you pick a perfect bracket?

Here’s the thing: the sizable majority fill out their bracket with their favorite teams or higher ranked teams winning. In 2003, only 25,000 out of the approximately 40 million brackets picked the eventual champs Syracuse to win — which is only about .0625% of the total brackets. In contrast, the top 25 ranked teams accounted for 62% of the approximately 500,000 brackets surveyed.

To get a better bracket, a 2007 study from St Louis University suggests that you pick a certain percentage of higher ranked teams with a bigger percentage of underdogs than usually pick. While the study never directly suggests a quote-unquote “winning” balance, our advice would be roughly half and half: you never know which team is going to be this year’s Cinderella story. And outliers having success happens more often than you would think. 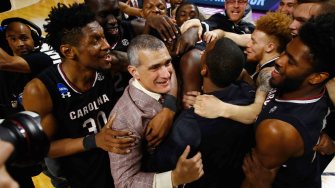 Head coach Frank Martin of the South Carolina Gamecocks celebrates with players after defeating the Duke Blue Devils 88-81 in the second round of the 2017 NCAA Men’s Basketball Tournament at Bon Secours Wellness Arena on March 19, 2017 in Greenville, South Carolina. (Photo by Gregory Shamus/Getty Images)

So you might be tempted to pick some obvious choices to win: Duke, or Kentucky for example. That isn’t always the case. The study goes as far to say that “picking all random teams has a greater chance of winning than picking all favorites.” Think of it this way: picking ‘favorites’ is what the majority amount of the brackets will do and thus a worse strategy. And if you do happen to be correct, you’ll probably win less: the more people that pick the ‘predictable’ winners (i.e. the higher ranked teams), the less there will be in the total pool if those teams go all the way to win.

We said above that 62% of the brackets will include the top 25 teams. If that scenario played out amongst 40 million Americans going for the hypothetical $9 billion in gambled money: that would mean that if that the 62% majority all picked the same bracket and it won, it would only amount to about $255 for each person. Which is still decent, if you ask me, but it's a long shot from what could actually be won.

Because if you think you're going to be the person that picks a perfect bracket... well... don't. Nobody has yet, and it's likely that that nobody ever will. The chances of picking a 100% perfect March Madness bracket is about 1-in-9,000,000,000,000,000,000. That's 9 quintillion for those of you who like to count zeroes. That's roughly the same chances as being bitten by a shark while getting struck by lightning at the same time.

It Turns Out Cosmic Dust Is Everywhere

An amateur scientist reveals that cosmic debris from space is all over the place.