A breakup or divorce, the death of a loved one, being diagnosed with a serious illness, or losing your job, all of these crises can cause tremendous suffering. How we handle such things is important. Will we show self-compassion or ruminate over the fact that this wasn’t supposed to happen?

In the parable of the arrow, sometimes called the second arrow, you picture yourself walking through a forest. Suddenly, you’re hit by an arrow. This causes you great pain. But the archer isn’t done. Can you avoid the second one? That’s the arrow of emotional reaction. Dodge the second by consciously choosing contemplation. It will help you avoid a lot of suffering.

When talking about esoteric Buddhist philosophy, it’s important to lay down a few clarifications. There are a lot of misconceptions out there. In truth, Siddhartha Gautama was the son of an elected chief, born in India near the Nepalese border around 400 BCE.

He isn’t exactly a religious figure, as he’s sometimes portrayed. Buddhism is a philosophy, not necessarily a religion. However, as it spread out in Asia, local beliefs often got mixed in with the philosophical teachings.

Even so, you can very well be a religious person of any faith, an agnostic, or even an atheist, and follow Buddhism or adopt some of its contemplative practices. And in fact, there’s a small but growing interest in what’s called secular Buddhism. Of course, the object, according to the Buddha or “Enlightened One,” was to reach nirvana. So how can it not be a religion? 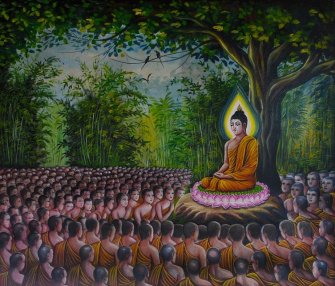 The Buddha wasn’t a deity or a prophet. He was just a guy who “woke up.” By: terimakasih0. Pixababy.

Alan Watts was a famous 20th century philosopher who elucidated many of the differences between Eastern and Western thought. In particular, he educated Western audiences regarding Zen. Watts said that in Sanskrit, nirvana means “wind.” In meditation, it is the breathing that’s often focused upon. It’s through this practice, particularly when breathing out, that the word is evoked.

In other words, the concentration is on this phase of breathing where the person is meant to let go. You let go of your wind and it comes back to you, it’s said. But if you hold in your breath, you’ll struggle. So nirvana isn’t a spiritual realm. It’s simply the act of letting go, when our natural reaction may be to feel anxiety and grip even more tightly.

Nirvana isn’t heaven, it’s the act of living life without craving, and without holding on too much to our own expectations. It’s not that Buddhists shed their emotions. Practitioners have feelings and thoughts but they don’t cling to them. It’s this clinging that causes suffering, in this view. Instead, they try not to be too attached.

In life, we almost never consider terrible things befalling us. We know that we’ll get sick sometimes, we’ll fail, that people will die around us, and that we’ll die ourselves, someday. But any such event is an abstract notion, until something bad happens. Then we’re knocked off kilter. It becomes real and we’re devastated.

We can’t believe we’d been so unlucky. Or perhaps, we think it’s completely unfair and we look for who’s responsible. That’s the second arrow, exacerbating the issue. Part of it comes from the fact that the truth doesn’t square with our preconceived expectations. 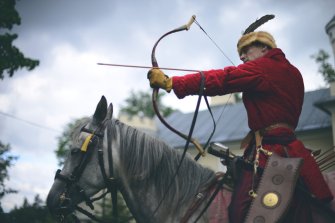 The parable of the arrow helps us understand how our emotional reactions sometimes make matters worse. By: Jakub Jankiewicz. Bow and Arrow. Flikr.

After telling the two arrow parable, the Buddha said, “In life, we cannot always control the first arrow. However, the second arrow is our reaction to the first. And with this second arrow comes the possibility of choice.”

This is often summarized as, “Pain is inevitable, but suffering is optional.” It begs a thoughtful approach to the first arrow, which is difficult to do. But if you can accomplish this, it’ll help ease your pain and avoid suffering.

The ways we often react are complaining, pointing the finger, condemning ourselves, or over-analyzing. Sometimes we even seek refuge in pleasures or distraction. Consider those who drown themselves in TV, food, sex, drugs or alcohol, when something painful occurs. Unfortunately, none of these offer lasting comfort and in the end, usually make things worse.

In The Arrow Sutra the Buddha said, “We cling to diversions, rather than observing what is actually present, the arising and passing of feelings.” So instead of turning away from emotions, turn towards them. How do you really feel about the situation really? Are there motivating emotions underneath that which you are allowing yourself to recognize or feel? If so, what new awareness arises from their acknowledgement? 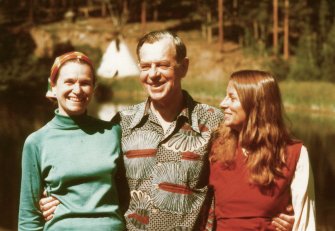 Instead of knee-jerk reactions, allow the time to let yourself feel your emotions and explore them, curiously, without judgment or fear. That’s not easy to do. You should pat yourself on the back if you can do this successfully.

Letting your past expectations melt away and see the situation as it truly is. This can help you process the event and even gain some insight. It may also allow you the space you need to find the right perspective and develop a plan for righting the situation or at least, mitigating it. In psychology, this is sometimes called learning to respond instead of react.

According to the late, world renowned mythologist Joseph Campbell, in his series of talks called The Eastern Way, in Sanskrit, the word nirvana literally means “no wind.” As opposed to Watts’s example, here Campbell brings up a different interpretation. This is the place of no wind. While looking into a pool of water, you can see your reflection. When the wind blows the water ripples, distorting the image. You don’t see reality as it is.

So what nirvana is, is the place without wind. It’s the ability to see things clearly without distortion. If when confronted with a crisis, we can clear our mind and choose the proper way to respond, rather than lashing out, which ends up hurting others or ourselves, we can take action that’ll help the situation rather than making it worse.

To learn more about avoiding the second arrow, click here:

On New Year’s Eve 1899, the captain of this Pacific steamliner sailed into history. Or did he?
Up Next
Sex & Relationships

Dogs, cats, other pets: would they eat you if you died?

Would your dog, cat, or other pet eat you if you died? The truth about if — and how soon — our animal friends start to see us in a different light.