I’ve gotten into this conversation throughout my adult life. As a straight, white male, by default I’m placed at the helm of a patriarchal society with all the possible advantages that could be bestowed upon a human being: career, income, sexual dominance, a lack of hostility from police and governing institutions. Due to this precondition, life has been a balancing act of recognizing what is not immediately handed over and what is. The balance doesn’t end with recognition: simply surrendering to one box is as unfair as being inside of that box and not admitting to its inherent advantages.

Straight white men have taken a beating recently—to a degree. The worst among us pretend our advantages are illusions while exploiting them to their fullest. The beating is deserved despite outcries from the racist and bigoted contingents masquerading as “men’s rights movements.” Humility is warranted, a concept every human should cultivate, some more so than others. Those who think they need it least likely need it most.

An important lesson I’ve learned from friends from other boxes is to stay in your lane. I’ve felt no need to pontificate on Black Lives Matter and #metoo because there are numerous powerful and eloquent speakers addressing these issues. Listening to media pundits with no skin in the game dissect the progressive minds pushing these agendas forward is like watching a giant palm repeatedly smacking an obtuse forehead. Sometimes—often, in this regard—silence, an assenting nod, and a donation to supportive organizations suffice. Critical and honest dialogues can be helpful. What isn’t needed is kerosene on a bonfire.

The straight white man in American society, like America in a global society, has an opportunity to be humbled right now. We should cherish the potential. First step: listen. It softens the brittleness built up over centuries of misguided abuses. It affords us the chance to put into practice those qualities the religious claim to cherish: grace and charity. It makes us human.

If there’s a beginner’s guide to humility, Hannah Gadsby’s Netflix special, “Nanette,” is the first chapter. Sure, it’s comedy—I haven’t laughed so hard in ages—but that singular word cannot encompass the breadth of what her show entails. Many wonderful declarations have arisen from the LGBTQ community of late, but none that I’m aware of have struck such a delicate balance of vulnerability and humor.

Credit tension. That’s one through line Gadsby utilizes in explaining what she’s doing to the crowd, just as a magician primes you for the illusion you swear you won’t fall victim to. Yet Gadsby’s story is no illusion. It’s impossible not to fall for her, a lesbian who grappled with coming out when homosexuality was illegal in Tasmania, a woman who has repeatedly been confused for a man and all the emotional trappings that entails. Forget picking a scab; “Nanette” is an amputation, sans medication.

Gadsby is masterful with tension because, as she admits, she’s had to be. Comedy has been her way of not addressing the pain and suffering of gender confusion, of fanatical religious and state policies, of being raped and beaten by straight white men. Which is why she declared that “Nanette” is her farewell to the stage. She refuses to hide behind a cloak of laughter to gloss over the pain not only herself, but a diverse world of varied gender and sexual choices embodied by humans face.

The tension is thick, particularly when it comes to straight, white men. Skewered is an appropriate word. Certainly, there are individuals responsible for her turmoil, but this show transcends the individual, which is why it would be a shame to take it personally. “Nanette” is a call to arms in fighting chauvinism and its often invisible sway on culture—in America, today, not so invisible—which is where humility comes into play. Writing off Gadsby as an angry feminist is too easy. Unfortunately, we live in a world where the status quo chooses the easiest way out. They need this show most.

Back to tension. In The Hidden Life of Trees, Peter Wohlleben writes that wood makes such exceptional conductors of sound thanks to the combination of tough bark and tender insides. The animals that live among trees use these sonic qualities for protection and security. Humans, no longer living among the trees, still use this wood to create music. The wood conducts sound masterfully, but it is the tension strings provide that strike our souls with such force. 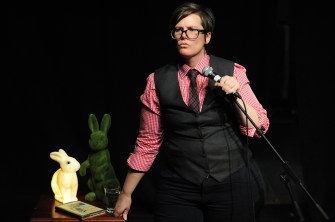 Existing in an outcasted sexual minority is the wood Gadsby uses to conduct her message. Insights gained from experiences are the strings. Applying this analogy to weaponry, the tension of a bow is “Nanette,” the target ignorance. The largest target happens to be the straight white male contingent of our species, which Gadsby hits with such force it’s impossible to ignore. Nor should we.

Because we have created the conditions for such an intervention to be necessary. Many of us have not personally abused others, but we remain complicit in our silence. Among the many reasons humans have come to dominate the animal kingdom, empathy sits at the top of the pyramid. Feeling the suffering of others helps us grapple with our own. It also, if executed properly, ensures that we take others into consideration. Without that step toward compassion, empathy is useless. If you’re only feeling sorry for yourself, you’re missing the point.

How could it be that “Nanette” is a finale when so many of us are just discovering Gadsby? As she toldVariety, she had to quit the stage for her show to be real. Yet, like Jay Z repeatedly quitting music, she provides an out: “But you know, everyone’s allowed to change their mind.”

If you suffer from straight male whiteness or any of the other diseases of ignorance plaguing humanity, “Nanette” is profound medicine. Now that Gadsby has claimed her place on the international stage, hopefully her mind will soon change. The world certainly needs more of it.

Extinction is a natural process, but it’s happening at 1,000 times the normal speed

Animal extinction is, after all, inevitable in the natural world — some have even called it the “engine of evolution”. So why should extinction matter to us?