It can be difficult to fully understand somebody who fundamentally disagrees with you on the nature of reality. More often than not, we don’t even try to. This lack of understanding can lead to some pretty horrible behavior on our part.

Such a lack of understanding might explain why atheists are considered less trustworthy than believers by pretty much everyone (including atheists), why laws discriminating against atheists exist in many parts of the word, and why many Americans wouldn’t vote for one even if they were qualified.

Trying to explain to a believer why a person might choose to be an atheist is difficult, especially when you only have access to one person’s case and reasoning. Luckily, one of the greatest philosophers of modern times can help explain the situation.

Helping us today is Bertrand Russell, a Welsh philosopher, aristocrat, and atheist. His work covers every field of philosophy except for aesthetics, and his work in logic was extremely noteworthy. He was also a very public intellectual who regularly spoke to audiences outside of academia.

One of these speaking engagements was transcribed and published as Why I am not a Christian. In it, Russell explains why he came to abandon Christianity around the age of 18 and why he never returned to the fold. His brilliant explanation of his reasoning makes him very interesting to those trying to understand why people would choose the atheist worldview. 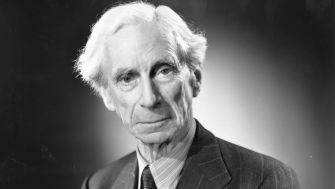 Russell defines a ‘Christian’ in the loosest terms possible, to prevent any theological technicalities from stopping him from being one. He argues that only two details are of great importance: that a person has a belief in God and immortality, and that they believe that Jesus Christ was at least the best and wisest of men. All other details are disregarded, as you must first hold these two beliefs to make the rest relevant.

He deals first with several arguments for God’s existence, some of them very famous. He points out that all of them have rather glaring flaws.

The first cause argument

This argument is simple; it maintains that since everything must have a cause, there must be a first cause to start everything else. This first cause is God and is exempted from needing a cause itself. Russell points out that if we can decide that one thing doesn’t need a cause, we have no reason not to say the world itself wasn’t the thing without a cause.

This one centers on the idea that the laws of physics needed to be set. It then assumes that the being who determined them was God. Russell finds this one to be outdated given advances in physics since the days of Newton, particularly in quantum mechanics. Since atomic physics is more statistical than classical, Russell contends that it seems odd to claim that an intelligence is involved in physics. Saying:

“There is, as we all know, a law that if you throw dice you will get double sixes only about once in thirty-six times, and we do not regard that as evidence that the fall of the dice is regulated by design.”

As with dice rolls, so with reality, he argues.

The argument from design

This perennial favorite argues that lifeforms are so well suited to their environments that a designer must have been involved. Russell dismisses this as absurd. He not only notes that Darwin explains the observed facts better through evolutionary theory but also points out how terrible some of the design choices are if they were, in fact, choices. He asks the audience:

“Do you think that, if you were given millions of years in which to perfect your world, you could produce nothing better than the Ku Klux Klan or the Fascists?”

After looking at a few others, he concludes that the arguments for the existence of a God are all lacking in rigor. Since Russell, famously, held that the burden of proof is on the person making a claim, the failure of these proofs leaves him with no reason to assume God’s existence.

What about the moral points? He must like Jesus!

Russell then considers Jesus Christ, as he notes that a person who doesn’t believe in God could still think that Christ was the “best and wisest of all men.” However, he explains that he cannot say that Christ was all that wise. He gives several examples of events in the gospels where Jesus acts very strangely. He describes the bizarreness of two of these events here:

“There is the instance of the Gadarene swine where it certainly was not very kind to the pigs to put the devils into them and make them rush down the hill to the sea. You must remember that (Christ) was omnipotent, and He could have made the devils simply go away; but He chooses to send them into the pigs. Then there is the curious story of the fig-tree, which always rather puzzled me. You remember what happened about the fig-tree. ‘He was hungry; and seeing a fig-tree afar off having leaves, He came if haply He might find anything thereon; and when He came to it He found nothing but leaves, for the time of figs was not yet. And Jesus answered and said unto it: “No man eat fruit of thee hereafter forever,” . . . and Peter . . . saith unto Him: “Master, behold the fig-tree which thou cursedst is withered away”.’ This is a very curious story, because it was not the right time of year for figs, and you really could not blame the tree.”

Russell also argues that no person who believes in eternal torture in hell, as Jesus did, can be all that great of a moral exemplar, as it smacks of a cruel and sadistic side. Russell finally claims that the statements of Christ and behavior of the disciples suggest that the second coming was expected to occur in their lifetimes. Since it didn’t, Russell points out that Christ couldn’t have been all that wise.

He does, however, support several of Christ’s moral maxims, such as his pacificism and concern for the poor. Russell doesn’t think that Christ has a monopoly on these ideas though, he points out that Lao Tzu had the same ideas centuries before.

Russell then concludes that he cannot be a Christian as he doesn’t think that Christ was the greatest or wisest of all men, let alone God incarnate. To remove any doubt on the issue, he explains that he finds both the Buddha and Socrates to be wiser and more moral than Christ was.

But he at least agrees that religion makes us better people, right?

Not in the least.

He instead thinks that dogma and religiosity tend to make us worse people, noting how the times in European history which were the least pleasant to live in were the ones which had the most intense religious belief.

Russell then explains his understanding that most people follow a religion not because they determined that it was the logical thing to do but because of an emotional attachment to it. This motivation wasn’t enough for Russell, nor is it enough for many people today. Given the failures of the above proofs and moral arguments to convince him, he sees no reason to hold on to these beliefs and instead sought to find what could persuade him. He settled on a scientific, humanistic worldview.

In our increasingly diverse society, it can be difficult to understand why people hold views which are opposed to our own. Luckily, with the help of thinkers like Bertrand Russell we can get an insight into why significant parts of the population think they way they do.

While fully understanding people who are very different from ourselves might be impossible, even the attempt can help make the world a more harmonious place. In the end, isn’t that a goal we can all agree on?

What Is (And Isn’t) Scientific About The Multiverse

Our best physical theories predict that a multiverse exists. But if we can’t test it, is it really scientific?The Universe is all there ever was, all there is, and all […]