The Senate voted to end the three-day government shutdown on Monday after Democrats agreed to extend government funding by three weeks in exchange for a pledge by Republicans to allow an immigration bill to reach the floor in February.

The agreement marks the first time Democrats have received a hard deadline for a vote on an immigration bill. Senate Majority Leader Mitch McConnell also promised to allow debate on the floor and an open amendment process.

But the vows of the majority leader fall short of what Democrats had initially demanded: an immediate vote on protections for Dreamers — undocumented immigrants brought to the U.S. as children. Some lawmakers seemed to express frustration at the compromise.

“Well I think the first thing he needs to do is strengthen his statement from last night,” said Senator Angus King of Maine, an independent who typically votes with Democrats. “‘I intend.’ I would much rather he say, ‘I commit’ or ‘I will move.’”

The shutdown is the country’s 18th since the modern budget era began with the passing of the Budget Act of 1974, and it’s unique for a couple reasons.

For one, it’s the first time we’ve seen a shutdown where one party has controlled the House, the Senate, and the White House, and federal employees were furloughed — sent home without pay. 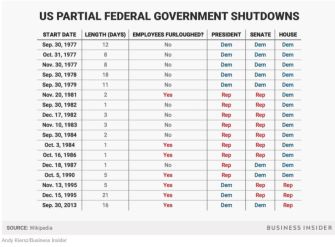 But more remarkable about the shutdown was the lack of involvement and clear direction from the White House. Prior to the shutdown, Republican leaders had attempted to force Democrats to choose between negotiating solutions for either DACA or CHIP, a health insurance program that provides services to 8.9 million children.

#Senate Democrats have a choice to make. This should be a no-brainer… pic.twitter.com/zdUFXxclZ9

But the Republicans’ plan was criticized by none other than their party leader, President Trump.

CHIP should be part of a long term solution, not a 30 Day, or short term, extension!

As The Conversation notes, “the president’s tweets made many Republicans nervous that the president might not support the deal that congressional leaders had fashioned to fund the government and CHIP.”

"You probably think it’s the same old story, but its not. We’ve never seen anything like this in modern times."

“Since our meeting in the Oval Office on Friday, the president and I have not spoken, and the White House refused to engage in negotiations over the weekend. The great deal-making president sat on the sidelines. Despite and because of this frustration, I've been having conversations with the Republican leader over the weekend about a path forward.”

It wasn’t just democrats who expressed frustration over the absence of President Trump in the negotiations. Last week, Senate Majority Leader Mitch McConnell said “I’m looking for something that President Trump supports, and he’s not yet indicated what measure he’s willing to sign.”

Other Republicans also commented on the president’s absence.

“I just don't think it helps for him to be involved at all,” Arizona Republican Sen. Jeff Flake said of Trump on Sunday night. “The White House really hasn't been involved from what I've seen.”

The White House has said President Trump’s stance on immigration has been clear from the start. But others feel his cabinet is influencing his decision-making or lack thereof.

“The White House staff I think is making it very difficult. I've talked with the President, his heart is right on this issue. I think he's got a good understanding of what will sell, and every time we have a proposal it's only yanked back by staff members.”

Republican strategist Alex Conant elaborated upon a similar idea in an interview with The New York Times:

“There’s a real sense that there’s a disconnect between the president and his staff on immigration issues, and people on all sides are seeking to exploit that disconnect. This is what happens when you have a president who is not clear and consistent on what he will accept: It emboldens all parties to take positions that they won’t compromise.”

The disappearance of Saudi journalist Jamal Khashoggi has caused international controversy.
The Present

West delivered an impassioned speech on American industry and transport, even pitching a high-tech plane to Apple.
▸
with
Stephen Johnson
The Present

Haley, who’s at times been both a supporter and critic of the president, reportedly “shocked” White House officials by announcing the end of her two-year tenure as a U.N. ambassador.
Hard Science

Neil deGrasse Tyson explains why Trump’s Space Force is “not a crazy idea”.
The Present

What Western people stand to gain from squatting more often

What is the what about the squat? And have we reached some sort of squatting vogue moment?