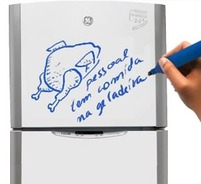 nSometimes the best innovations are the ones that are the most obvious: check out this GE fridge that also functions as a family whiteboard that was featured in this week’s Springwise newsletter. Since most family fridges are chock-full of to-do notes and shopping lists and what-have-you, this seems like a remarkably simple solution to a problem that has dogged families for centuries. As Springwise points out, though, the fridge-slash-whiteboard is currently only available in Brazil, where it is sold as a Risque-Rabisque (“scrawl and scribble”):

“When GE launched “Imagination at Work” as its new slogan to replacen”We Bring Good Things To Life”, the most eye-catching part of itsnonline campaign was a virtual whiteboard that visitors could sketch andnscribble on. Apparently, someone at GE had the smarts to transfer thenad’s essence to the gleaming white surfaces of GE’s appliances. Whitengoods + whiteboard…? Witness the birth of the sketch-a-fridge… nn

The refrigerator is covered in anspecial coating similar to dry erase whiteboards. Replacing the age-oldnpractice of sticking grocery lists and children’s drawings on thenfridge, missives can now be written directly on the appliance andneasily wiped off. It’s a simple innovation that cleverly integratesnexisting human behaviour, and turns a mundane product into somethingnplayful and appealing. Opportunities? When rethinking a product ornservice, don’t just focus on features or haute design. An element ofnfun can be just as much of a sales magnet, at a fraction of the cost.”