A 17-year-old British student, Miles Solomon, spotted an error in NASA’s data while working on a school physics project. What’s more, the teenager figured out that radiation sensors on the International Space Station (ISS) were not working properly. The sensors were actually capturing “false data”.

Once he found the error, Solomon emailed NASA, which said it “appreciated” the feedback and even invited him to help fix the problem.

Solomon’s Tapton Secondary School in Sheffield was taking part in a project from Institute for Research in Schools (IRIS) which provided the students with real scientific data from NASA’s radiation readings. The measurements were of radiation levels from British astronaut Tim Peak’s stint on the ISS in December 2015, taken every 4 seconds. The students were encouraged to look for anomalies and promising patterns.

When he first got the readings, Miles right away had a plan.

‘What we got given was a lot of spreadsheets, which is a lot more interesting than it sounds,’ he told BBC Radio 4. “I went straight to the bottom of the list and I went for the lowest bits of energy there were.” 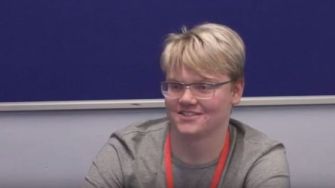 What he spotted is that on occasions when the sensors didn’t detect any radiation, they instead recorded a negative reading of -1. As you cannot have a negative for energy, Solomon and his teacher got in touch with NASA.

“It’s pretty cool”, said Miles. “You can tell your friends, I just emailed Nasa and they’re looking at the graphs that I’ve made.”

It turned out the teen noticed an error that NASA didn’t fully see for 15 months. The space scientists said they did actually know of the error’s existence but thought it happened once or twice a year rather than many times a day.

The discovery of the error was welcomed by NASA and IRIS, which created the opportunity to get “real science in the classroom”. They hope this kind of cooperation can inspire students to become scientists.

Miles is very excited, although his friends might be less enthused.

“They obviously think I’m a nerd,” shared the self-deprecating student. “It’s really a mixture of jealousy and boredom when I tell them all the details.”

He also doesn’t see the situation as a case of embarrassment for the world’s premiere space program.

“I’m not trying to prove Nasa wrong. I want to work with them and learn from them,” Solomon added.

We are likely to see the first humans walk on Mars this decade.
Hard Science

Why so gassy? Mysterious methane detected on Saturn’s moon

Scientists do not know what is causing the overabundance of the gas.
Up Next
Neuropsych

Does the thought of death make you anxious? A new study suggests that the fear of mortality isn’t really about the afterlife at all.