The good news is that scientists believe they’ve figured out how much starlight the universe has ever produced since the Big Bang. Exciting. The bad news? Well, apparently star production peaked a long, long time ago, and ever since, the universe has been in the process of dying. Only seven new stars are born a year these days. You can keep buying green bananas, though; there’s time: We still have many billions of years before the stars that already exist go dark and cold. 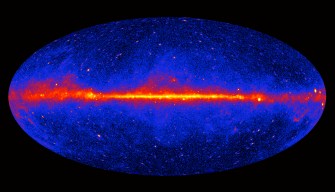 This map of the entire sky shows the location of 739 blazars used in the Fermi Gamma-ray Space Telescope’s measurement. Brighter areas have stronger gamma rays.

The lead study author of the study, astrophysicist Marco Ajello, said his team was able to measure the entire amount of starlight ever emitted using the Fermi telescope.

“This has never been done before,” he told Clemson University’s the Newsstand. “Most of this light is emitted by stars that live in galaxies. Every single star that has existed has contributed to this emission, and we can use it to learn all the details about star formation and evolution and galaxy evolution.”

The Fermi team has been measuring nine years worth of data from the universe’s 739 known blazars. 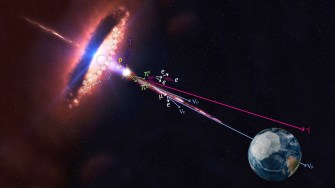 What the blazar is a blazar?

As galaxies spin around a supermassive black hole at their center, charged particles circling the event horizon develop strong magnetic fields that further excite the particles, causing them to emit radiation at very high energies. Such galaxies produce a great deal of light at their centers, and they’re referred to as “active galactic nuclei” (AGN). Some AGNs seem brighter than others from here on Earth. They’re not really — they’re just the ones pointed straight at us.

Jets of material shot out of such AGNs are called “blazars.” The quasar sound-alike name gets its “Bl” from “BL Lacertae,” after the constellation in which the first recorded one, back in 1929, originated. Blazars travel at near light speed, and within them are gamma-ray photons the Fermi Gamma-ray Space Telescope is designed to detect. 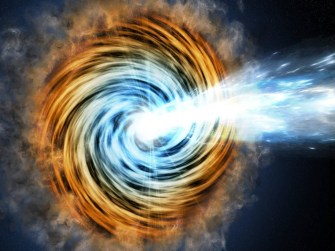 Encounters with the EBL

As they travel across space, blazar gamma-ray photons collide with the universe’s extragalactic background (EBL), the background radiation produced by star formation. Says Ajello, “Gamma-ray photons traveling through a fog of starlight have a large probability of being absorbed. By measuring how many photons have been absorbed, we were able to measure how thick the fog was, and also measure, as a function of time, how much light there was in the entire range of wavelengths.” He adds, “It’s like following the rainbow till the end and finding the treasure. That’s what we found.”

In terms of the blazars, NASA columnist Ethan Seigel writes, “The closest one comes to us from just 200 million years ago; the most distant has its light arriving after a journey of 11.6 billion years: from when the Universe was just 2.2 billion years old.”

Tracing the History of Starlight with NASA’s Fermi Mission

The timeline behind and ahead

The notion that the universe is “dying” is due to the fact that star production, which is decreasing, is a grand recycler of energy, matter, and elements that “nourish” the universe. Our survival relies, quite literally, on starlight and its generation. As Dieter Hartmann, another author of the study, says: “Without the evolution of stars, we wouldn’t have the fundamental elements necessary for the existence of life.”

Rituals come as much from religion as they do from the way Earth spins around the Sun.
▸
4 min
—
with
Sasha Sagan
Up Next
Starts With A Bang

This Is How Dark Energy’s Main Competitor Failed

The expanding Universe really is accelerating, and no dusty scenario can explain it.20 years ago, our understanding of the Universe underwent a revolution. For generations, we had known the Universe was […]