An Antarctic particle-observation experiment conducted in Antarctica in 2016 has produced what its scientists say may be evidence of a second universe parallel to ours, an anti-universe in which time runs backwards. On the other hand, maybe not. While there’s little doubt about what the searchers saw, nobody has quite figured out what it was, and some imply the parallel-universe idea may be as much an expression of frustration over the unresolved mystery as a serious hypothesis. 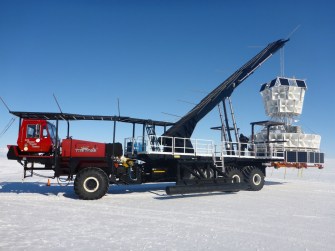 Ever since Austrian physicist Victor Hess realized that cosmic rays were bombarding the Earth from above in 1912, scientists have sought out ways in which they can be detected and studied without the distortion introduced by Earth’s magnetic field. Fortunately, cosmic rays are accompanied by a detectable beacon: neutrinos, and neutrinos don’t care about magnetic fields — they travel in a simple straight line.

Antarctica presents an interesting opportunity to learn about cosmic waves. When low-energy neutrinos hit the ground ice there, they pass right through along with their cosmic-ray partners. However, high-energy neutrinos, such as those that accompany cosmic rays, can’t pass through and crash into the ice, producing a shower of charged particles.

NASA’s Antarctic Impulsive Transient Antenna (ANITA) is designed to detect and measure these bursts, allowing scientists to figure out a neutrino’s trajectory, and thus its source and that of its accompanying cosmic ray. ANITA is a collection of antennas sent aloft in a large balloon some 1-4 kilometers above McMurdo Base in Antarctica. It’s made three month-long flights so far, hunting for signs of neutrino impacts over a million square kilometers of ice, but the only thing ANITA detected are what seemed to be bursts of background noise.

However, as disappointed scientists waited on the surface during ANITA’s third flight, they decided to go over the data from the first two missions one more time to see if there was anything they missed. The researchers found, in what they’d previously assumed to be noise, the signature of a strangely high-energy particle, with a charge of 0.6 and 0.56 exaelectronvolts (a billion billion electronvolts).

The particle’s trajectory is what made no sense: It apparently didn’t come down from space — it was exploding outward from underneath the ice. Since high-energy particles can’t pass through the Earth, ANITA’s observation has puzzled the physics community for the last couple of years. (Since that time, three other similar particles have been observed by ANITA.)

In March, since no definitive explanation has yet been put forward, experimental particle physicist Peter Gorham of the University of Hawaii and principle investigator with ANITA and his colleagues provided one. It’s a stunner: The paper asserts that ANITA caught a “right-handed neutrino.” The detection of such a particle would signify the presence of an anti-universe. In this scenario, the particle’s direction would be explained as a reversed-in-time arrival of the particle on Earth from space. 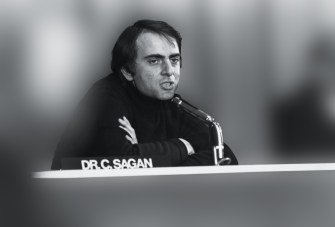 In the case of the hypothesis proposed ANITA’s team, theirs is more a matter of an extraordinary lack of proof in the form of convincing explanations that would be justify an extraordinary claim. Sagan would likely be unimpressed.

“We are absolutely sure that there is new physics out there to be found,” radio Astronomer Clancy James tells Jackson Ryan at c/net, explaining why it’s not shocking that physicists can’t explain the four reported observations detailed in the team’s paper. Even so, astrophysicist Geraint Lewis point out, “There are a number of potential candidate particles that could account for the results from ANITA.” There is also a theory that the geomagnetic current in the Antarctic ice distorts particle trajectories, potentially producing a head-scratching detection such a ANITA’s.

It’s also true that one approach to an unanswerable question is to think outside of the box. “In such a situation you start exploring even more extreme possibilities,” says Ekers.

While astroparticle phenomenologist Pat Scott admits the anti-universe explanation is “plausible” — an interesting word in the mind-blowing arena of physics — he cautions, “There’s nothing that necessarily makes it a detection of a parallel universe.”

Ron Ekers, of Australia’s national space agency, suggests Gorham and his colleagues may just be sick of waiting for another answer: “The unusual ANITA events have been known and discussed since 2016. After four years there has been no satisfactory explanation of the anomalous events seen by ANITA so this is very frustrating, especially to those involved.” He suggests the anti-universe idea is “a somewhat cheeky explanation … born out of the frustration of having nothing else that worked.”

Concludes Lewis, “Whilst parallel universes sound exciting and sexy when discussing the ANITA signal, alternative ideas are still on the table.”

For now, the reaction of the larger physics community suggests we’ll have to take the anti-universe theory with at least a grain of salt and consider ANITA’s baffling observations a genuinely intriguing puzzle awaiting a provable solution.

Board and card games that will boost your vocabulary

A larger vocabulary can be a confidence booster for children and make adults better communicators.