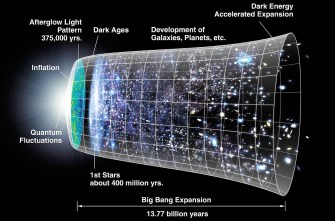 A graph of the expansion of the universe. On the far left of this image, you can see the very brief moment of inflation that many physicists believe counterbalanced the randomizing effects of early quantum fluctuations.

Why we need inflation

Among these critics is Princeton physicist Paul Steinhardt, who actually contributed to the development of the theory described above, the idea that there was a moment of massively expanding space referred to as the inflationary epoch that quickly slowed down to the rate of expansion seen today. But including the inflationary epoch seems odd — why would there be this sudden change in the pace of expansion? It’s actually something of an invention, a means of patching a troublesome quirk in the vanilla Big Bang theory.

“The Big Bang is not something that we really deeply understand, we have no theory of the Big Bang,” says Steinhardt.

“But our notion is that it’s some random, highly turbulent, quantum beginning from nothing to something. And so, it would leave a universe which is very random and distorted. Yet we don’t observe that in the way the universe looks today. So we need some idea to fix that.”

Today, when you zoom out far enough, the universe looks fairly flat and uniform — matter and energy are all fairly evenly distributed, and spacetime doesn’t appear to have any curves. Inflation helped bridge the gap between the very random explosion of the singularity and the uniformity we see today — space expanded so rapidly that it smoothed out all the irregularities that would have occurred due to quantum effects during the Big Bang.

Does inflation cause more problems than it solves?

Despite helping to develop it, Steinhardt sees a few issues with the inflation model. For instance, those quantum effects that the inflation theory was supposed to deal with can actually create patches of the universe where inflation goes on forever. “The problem is,” said Steinhardt in an interview with Nautilus, “due to the effects of quantum physics these patches are not all the same. The effects of quantum physics, when you include them properly, lead to a situation where some patches are like us, but some patches are not like us; and in fact, every conceivable possible outcome of the universe can occur if you look from patch to patch to patch and there’s no particular reason why ours is more likely than any other.” What Steinhardt is describing here is a multiverse, an infinite number of different universes with different rules. The one where we exist just so happens to have the right rules.

The trouble with this is that it almost seems like cheating. If inflation produces an infinite number of universes, then of course we would end up with the one we see around us; it doesn’t really explain our specific universe. And for this reason, the inflation theory can’t be disproved either — it predicts everything, and so makes no testable predictions. What if there were a simpler explanation?

Instead of a Big Bang, with its attendant issues requiring the introduction of inflation, Steinhardt and other scientists have been toying with the idea of a Big Bounce. There are a variety of Big Bounce theories, but they essentially boil down to the idea that the universe is caught in a cycle where it expands after the Big Bang, then begins to contract. Some theories say that it contracts to the point of a singularity, where classical physics breaks down, and explodes again into a new Big Bang, while other theories suggest that the universe contracts to a point just above a singularity, where classical physics continue to apply.

But crucially, this process of contraction gives the universe time to become uniform throughout. When the bounce occurs, all matter is fairly uniform, becoming disordered over time. We currently live in a time when the universe is orderly, but it will become disorderly as time goes on. Once it begins contracting, the universe becomes increasingly orderly again. As it contracts further and further, matter and energy become more evenly distributed throughout the universe. Things flatten out and become more homogeneous as the next bounce approached. It could be that our universe has no definite beginning and will have no definite end — it could just bounce eternally.

Nature is a whole. The sciences should be, too.
Up Next
The Present

Why is psychedelic culture dominated by privileged white men?

It isn’t surprising, but what’s behind the straight-white-male hegemony?