Antimatter is a concept that oozes sci-fi, evocative of amazing engines, time travel and most likely destruction of the whole universe. Or maybe it’s a parallel-worlds-are-everywhere-around-us type of thing. In any case, this idea comes to us from the law of physics that predicts that there should be an antimatter particle for every particle of regular matter. But if the two shall ever meet, there’d be a release of energy, annihilating both.

This goes to the heart of the mystery of how our universe was created. If equal amounts of matter and antimatter were produced by the Big Bang, how did everything not just explode or just vanish? Why are we even here?

To study this, scientists have been trying to understand antimatter, looking for decades to compare its properties to matter. And a new report from CERN in Switzerland confirms that for the first time ever researchers were able to control an antimatter particle of the hydrogen atom, manipulating it long enough with lasers to allow for measurement and comparison with the regular matter hydrogen atom.

In particular, scientists from the ALPHA experiment at the CERN laboratory were able to hit the antihydrogen atoms with a laser to observe the light they gave off as positrons in the atoms returned to lower energy levels.

“Using a laser to observe a transition in antihydrogen and comparing it to hydrogen to see if they obey the same laws of physics has always been a key goal of antimatter research,” said Professor Jeffrey Hangst, spokesperson of the ALPHA collaboration. 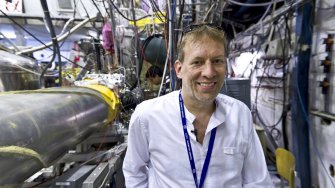 If you think your job is hard, try working with antimatter.

“What you hear about in science fiction — that antimatter gets annihilated by normal matter — is 100 percent true,” Hangst told NPR, “and is the greatest challenge in my everyday life.”

In other words, his test subjects would constantly disappear.

Images show anti-hydrogen atoms annihilating as they come into contact with the ordinary matter walls of the ALPHA experiment. Credit: CERN

Interestingly, the researchers concluded that under the same test conditions, the antihydrogen atoms gave off the exact same light spectrum as regular hydrogen atoms.

“It’s long been thought that antimatter is an exact reflection of matter, and we are gathering evidence to show that is indeed true,” Tim Tharp from ALPHA said to Gizmodo.

To go back to the question of why the universe didn’t just collapse in on itself, with matter and antimatter cancelling each other out –

“Something happened, some small asymmetry that led some of the matter to survive, and we simply have no good idea that explains that right now,” explained Jeffrey Hangst to NPR.

Further study of antimatter might yield the answer, especially as the work by Hangst and the team at ALPHA points the way towards a whole new field of antihydrogen spectroscopy. 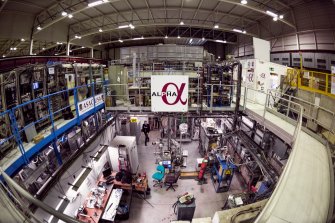 But what about making antimatter in a lab environment – could that blow us up eventually?

“The amount of antimatter involved in this experiment and created by the history of mankind is such a small amount that it poses no threat to anyone,” Tim Tharp reassured Gizmodo.

We’ll have to take his word for it. In the meantime, let’s dream about this antimatter rocket – 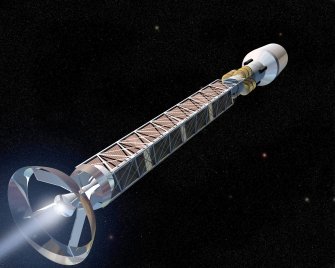 Rituals come as much from religion as they do from the way Earth spins around the Sun.
▸
4 min
—
with
Sasha Sagan
Up Next
Technology & Innovation

This could open allow for the exploration of nearby exoplanets, solar systems, and other parts of the galaxy.