As if there were any reason to doubt the 97% of climate scientists who believe that climate change is driven by human activities, now more data has confirmed what we already knew. The fact that the five most recent years have been the five warmest in 139 years, the fact that global temperatures have risen by 0.8°C since 1880, and the fact that arctic sea ice is decreasing by 12.8% per decade are definitively attributable to human-driven climate change.

The new certainty comes from a recent article by Benjamin Santer of the Lawrence Livermore National Laboratory and colleagues. The article, published in Nature Climate Change, looked at three of the most relied-on satellite datasets used to conduct climate science: Specifically, the Remote Sensing Systems (RSS), the Center for Satellite Applications and Research (STAR), and the University of Alabama in Huntsville (UAH) datasets.

The researchers were looking through the datasets for a specific signal—that is, the “thumbprint” of human-induced climate change—in the noise of the data—the general variance in the climate. They found that the likelihood that the current change in climate is derived from human activities has surpassed the “gold standard” of statistical significance, or the five-sigma level. 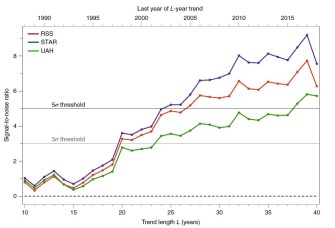 This graph depicts the signal-to-noise ratio found in the three datasets over time. The signal refers to human-driven climate change, while the noise refers to the general variance in our climate.

The RSS (red) and STAR (blue) datasets showed that the evidence for human-driven climate change has passed the five-sigma level a while ago, but the UAH (green) dataset only passed this threshold recently. (Santer et al., 2019)

For most, the fact that the researchers detected the fingerprint of human-driven climate change at the five-sigma level probably means exactly nothing. Sigma refers to a standard deviation—a measurement of how spread out a value is from the mean or average. Another way of thinking about it is that the sigma levels correspond to how likely it is that a given observation actually matches what one is looking for versus how likely it is that the observation has arisen from random chance.

Generally, the five-sigma level, or five standard deviations, is used in particle physics as the threshold before a discovery can be declared. Because many of the observations from particle physics can occur by chance rather than from, say, a newly discovered type of particle, physicists tend to set the bar high. When an observation meets the five-sigma level, it means that only once out of 3.5 million times could the observation have occurred by chance. This threshold was used to declare the discovery of the Higgs boson and the first detection of gravitational waves.

Now, lead author Santer claims that the three biggest datasets on climate change show that human-driven climate change has reached the five-sigma level: There is a one in 3.5 million chance that our climate is changing because of some other reason than human activities. “The narrative out there that scientists don’t know the cause of climate change is wrong,” said Santer in an interview with Reuters. “We do.”

Making use of 40 years of satellite data

Santer and colleagues’ work was based on the previous work by Klaus Hasselmann, who developed a statistical approach for attributing climate change to various sources. Hasselmann’s original work was developed in 1979, however, only a year after the first satellites began collecting data on global temperature. By modifying Hasselmann’s approach and applying it to the 40 years of satellite data we now have access to, Santer and colleagues could track the growing likelihood of human-driven climate change.

Because of variations in satellite instrumentation, condition, and configuration, not all three datasets showed the same level of confidence in human-driven climate change. As Santer writes, “In two out of three datasets, fingerprint detection at a 5σ [five-sigma] threshold—the gold standard for discoveries in particle physics—occurs no later than 2005, only 27 years after the 1979 start of the satellite measurements.” In 2016, the third dataset from the UAH satellite also showed that the fingerprint of human activity in climate change passed the five-sigma threshold. In the conclusion of his article, Santer summarized these findings as succinctly as possible: “Humanity cannot afford to ignore such clear signals.”

Environmental activists want us to feel “flight shame” if we can take a train, instead. But this isn’t entirely realistic, even in Europe.
Up Next
Hard Science

What is the ‘Book of Changes’?

The I Ching serves as a foundation for many Eastern philosophies and Western mathematics.