Just when you thought climate change couldn’t get any worse, a new study in Nature Plants tells us that you can say goodbye to low-cost beer. 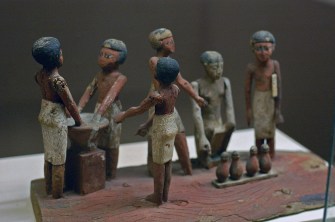 A wooden model of beer making in ancient Egypt. Given the importance of beer to many cultures, the effect of a dramatic price increase could be felt across entire societies.

The study, carried out by researchers in China and the United States, looked into how different levels of temperature change would impact barley crops around the world and how this will affect beer prices. This is the first such study that focuses on beer, though others have been done before on how climate change will affect coffee and wine production.

The researchers ran four climate models, each one using a different estimate of how much the global temperature will increase over the next century, to see what the impact on barley production would be. They then took the yield estimates from these tests and fed them into pre-existing supply and demand models for barley.

Only 17 percent of the world’s barley supply is used to make beer, with the majority of the rest being used to feed livestock. The models suggested that in the event of major changes to the environment, namely those that reduce crop yields, most farmers will continue to use the crop to feed their animals rather than make beer. This will lead to severe price increases for beer as supply drops faster than demand.

Garrett Oliver: How to Drink a Beer

Why is barley so important anyway?

Barley is vital to the beermaking process. While any grain could be used instead, most beers use barley for both traditional reasons and its flavor. Other grains are often used to lower the cost or alter the taste, much to the distaste of beer aficionados. This is why a shortage of barley would be so bad for the beer makers; the substitutes just aren’t as good.

Is it all bad? Is there no hope at all?

There is the chance that if the climate were only to warm up by two degrees Celsius — that is increasingly unlikely — that the temperature increase may be gradual enough that farmers could selectively breed drought-resistant barely in the while, or change their practices to make do with warmer, drier seasons. If this is the case, then the largest price increases would be averted.

Don’t count on this though, at our current pace we are on track to increase temperatures by nearly three degrees Celsius by 2040.

Does supply and demand determine markets?

How much more expensive are we talking?

The models were clear. As the laws of supply and demand dictate, the predicted beer prices rose as the hypothetical barley supply fell. One model showed beer prices in Ireland rising by 193 percent. Co-author Stephen J. Davis figures this could be an increase of nearly $20 per six-pack. Under the best-case scenario, prices will still increase by 15 percent in most countries.

The price effects will also be noticeable for bread, though Davis suggests this will be less noteworthy:

“In an affluent country like the United States, people might not be so concerned if their bread gets 10 to 25 cents more expensive. It could be that luxury goods are actually more visible, in terms of the impact of climate change on affluent consumers. There is definitely a cross-cultural appeal to beer, and not having a cool pint at the end of an increasingly common hot day just adds insult to injury.”

Should we block out the sun to stop climate change? | NASA’s Michelle Thaller

Is there anything we can do to prevent this?

The worst of these predictions can be avoided if the global temperature rise is kept to under two degrees Celsius. The Paris Agreement was designed to achieve this by strengthening the global response to climate change. It has the ambitious goal of keeping global temperature rise under two degrees with an outside goal of keeping it under one and a half degrees. However, with American and potentially Brazilian withdrawal from the treaty, this seems like an impossible dream.

The study still has the potential to help draw attention to the problem of climate change, as beer is the world’s most consumed alcoholic beverage. Study co-author Dabo Guan hopes that this news will help people see how climate change will affect their lives, explaining, “What I’m trying to emphasize here is that climate change will impact people’s lifestyle.”

While massive storms, deadly heat waves, and droughts that spark wildfires get more press, the small changes might be the ones that get people to take note. Will global warming double the price of beer? At the current pace, it will. Perhaps then people will take the problem seriously.

Here’s how to appreciate them from a distance.
Up Next
The Present

Canadians who’ve been caught with 30 grams of marijuana or less will soon be able to request those charges to be expunged.