NASA plans to send a flying drone to Saturn’s moon Titan to search for signs of life and study other aspects of the remarkably Earth-like world. The rotorcraft is set to land on Titan — a moon that’s 10 times farther from the sun as Earth is, and bigger than the planet Mercury — in 2034.

“Titan is unlike any other place in the solar system, and Dragonfly is like no other mission,” said NASA associate administrator Thomas Zurbuchen. “It’s remarkable to think of this rotorcraft flying miles and miles across the organic sand dunes of Saturn’s largest moon, exploring the processes that shape this extraordinary environment. Dragonfly will visit a world filled with a wide variety of organic compounds, which are the building blocks of life and could teach us about the origin of life itself.”

Dragonfly will land on a stretch of soft dunes which Elizabeth Turtle, the lead investigator of the mission, described as “the largest Zen gardens in the Solar System wrapped around almost the entire equatorial region.” After landing, the Mars rover-sized craft will spend about two-and-a-half years taking photos, collecting samples of the surface, using seismometers to detect possible titanquakes, and scouting out landing sites for future missions.

Titan is a unique world. It’s the only other body in our solar system whose surface has standing liquid (methane instead of water). The moon’s unusually thick and nitrogen-based atmosphere harbors conditions like those of early Earth, making it an ideal place to search for microbial life, and to study the conditions that precede it.

“Titan is just a perfect chemical laboratory to understand prebiotic chemistry — the chemistry that occurred before chemistry took the step to biology,” Turtle said. “Ingredients that we know are necessary for the development of life as we know it are sitting on the surface of Titan.”

Dragonfly will spend most of its time on Titan’s surface. But every 16 days, the drone-craft will fly autonomously to a new location. Flying will be unusual on Titan, where the gravity is about one-seventh of Earth’s.

“If you put on wings, you’d be able to fly on Titan,” Turtle said, adding that cameras aboard the craft will let NASA simultaneously take photos both of what’s under and ahead of the rotorcraft. 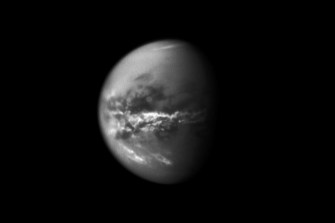 It won’t be the first time a spacecraft has visited Saturn’s largest moon. In 2005, NASA’s Cassini orbiter carried the Huygens probe to Titan, depositing it on what appeared to be a dry lakebed. The probe then snapped the first photo of the moon’s surface — and also the first photo containing what scientists believe to be a drop of liquid seen on an extraterrestrial surface. NASA hopes its new mission will yield even greater discoveries. 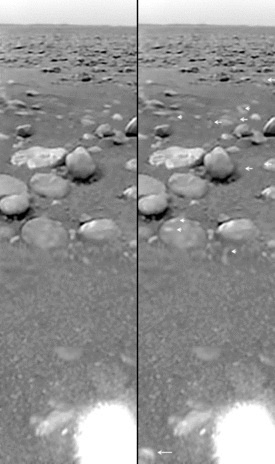 “With the Dragonfly mission, NASA will once again do what no one else can do,” said NASA Administrator Jim Bridenstine. “Visiting this mysterious ocean world could revolutionize what we know about life in the universe. This cutting-edge mission would have been unthinkable even just a few years ago, but we’re now ready for Dragonfly’s amazing flight.”

The Dragonfly mission is part of NASA’s New Frontiers program, in which teams compete for funding for projects designed to explore our Solar System. As The New York Timesnotes, other Frontiers missions have included the “New Horizons spacecraft, which visited Pluto; Juno, which now orbits Jupiter; and Osiris-rex, which will soon collect a sample from the asteroid Bennu and return it to Earth.”

In cities, people tend to think of parks as dangerous.