When we hear that climate change causes “extreme weather events,” our minds jump to hurricanes ripping palm trees out of the ground or snowstorms burying cars. But one of the most dangerous kind of extreme weather event is much less visible than, say, a tornado tearing the roof of a house. Heatwaves kill more people than all other weather events combined, and they’re on the rise.

During the summer of 2003, an estimated 70,000 Europeans died when a deadly heatwave swept through the region. As the globe continues to warm, 150 Americans are projected to die every summer day by the mid-2040s. Aside from directly causing death from heatstroke, dehydration, other heat-related conditions, high heat also weakens cognition. Violent crimes, too, tend to spike on hotter-than-average days.

Now, a new study has uncovered another threat posed by heatwaves. It turns out the prolonged exposure to high heat reduces male fertility, and repeated exposure to successive heatwaves can even cause sterility. 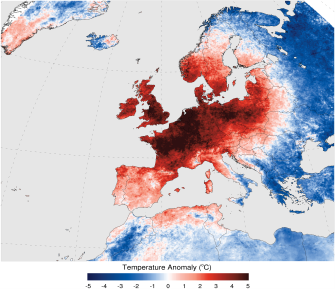 This image shows the temperature anomalies across Europe during the devastating 2006 heatwave.

The study, recently published in Nature, examined the sperm viability of red flour beetles under heatwave conditions. In a corresponding blog post, study co-author Matthew Gage wrote, “a wealth of research since the start of last century, mainly on warm-blooded mammals (including humans), has shown that environmental or experimental warming by even a few degrees can cause declines in sperm quality and male ability to fertilise.”

He points out that most of these studies have been conducted on endothermic, or warm-blooded, animals, but very few studies have been conducted on exothermic, or cold-blooded, animals like insects. Given that the vast majority of animals are ectothermic and that insects serve as food or pollinators for many animals and plants, understanding how climate change affects these creatures is critical to preserving our ecosystem. What’s more, studying sperm viability in insects serves as a model for how heatwaves will affect other animals—like humans. 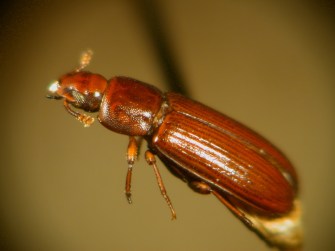 The researchers exposed red flour beetles (like this one) to high-heat conditions to observe their reproductive performance. (Wikimedia Commons)

What did they find?

The researchers exposed their beetles to heatwave-like conditions over the course of five days. Male red flour beetles like temperatures at about 35 degrees Celsius, or 95 degrees Fahrenheit. The experiment exposed them to an environment that was 42 degrees Celsius, or 107.5 degrees Fahrenheit. Depending on where you live, that may sound like an unlikely temperature, but the authors noted that over 90 countries experience heatwaves in that temperature range or higher.

But nature is adaptable, right? One might expect the beetles to eventually get over the initial shock of their new, hot environment and perform better. This research showed that, if anything, the opposite is true, at least in the short term. A second exposure to heatwave conditions made the beetles almost completely sterile.

It gets worse; not only did the heat-exposed male beetles do worse than their cooler peers, their male offspring were also less fertile than the offspring of the control beetles. Even when this new generation of beetles was not exposed to heatwave conditions, they had a 25% reduction in mating success. What’s more, they lived significantly shorter lives than the control beetles, too.

We’ve known for a while that certain environmental conditions can affect the health and fertility of offspring, but usually this is in response to irradiation, exposure to toxic chemicals, or stress. When an animal is exposed to an unhealthy environment, the genetic material contained in their sperm becomes damaged, hamstringing the next generation’s ability to reproduce. This research suggests that exposure to high heat damages offspring’s reproductive ability in the same way.

While this study looked specifically at beetles, evidence suggests heatwaves will affect mammals in much the same way. Exposing mice to hotter temperatures reduced fertility by 75%, for instance. Overall, “this work reveals that sperm are very sensitive to heat,” writes Gage. “Environmentally-relevant experimental heatwaves damage sperm function, leading to reduced fertility and a decline in offspring performance.”

If this effect is widespread enough, it could throw a serious monkey wrench into the inner workings of our ecosystem. The importance of insects in the diets of large animals cannot be overstated. As the globe continues to warm, insect populations are crashing. One study in Germany found that the local insect population had dropped by 78% in just 24 years, which appears to be part of a global trend. While it can’t be said that this is entirely due to increasingly common and extreme heatwaves, this research suggests that they may play a major role.

EV charging stations are the most widespread alternative to gas and diesel pumps. Each alternative has its own hotspots and “deserts.”
Up Next
Health

How to make time for exercise — even on your craziest days

A new study shows choosing to be active is a lot of work for our brains. Here are some ways to make it easier.