NASA published a stunning photo showing the International Space Station cross in front of the sun. Regarding the picture, which was captured by Rainee Colacurcio, NASA officials wrote:

“Transiting the sun is not very unusual for the ISS, which orbits the Earth about every 90 minutes, but getting one’s timing and equipment just right for a great image is rare. Strangely, besides that fake spot, in this recent two-image composite, the sun lacked any real sunspots. The featured picture combines two images — one capturing the space station transiting the sun — and another taken consecutively capturing details of the sun’s surface.”

The photo is remarkable because it offers a glimpse of the star at a moment when it was devoid of sunspots. As NASA further described:

“Sunspots have been rare on the sun since the dawn of the current Solar Minimum, a period of low solar activity. For reasons not yet fully understood, the number of sunspots occurring during both the previous and current solar minima have been unusually low.” 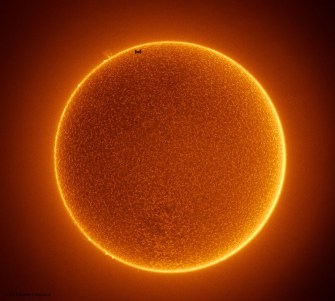 The solar minimum is the lowest point of activity during the solar cycle — the 11-year period during which our sun’s activity fluctuates. During its highest point of solar activity, the sun can bring about observable changes on Earth. 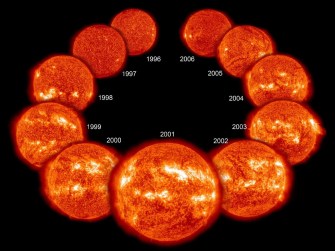 Illustration of a solar cycle

“Giant eruptions on the Sun, such as solar flares and coronal mass ejections, also increase during the solar cycle,” NASA officials wrote. “These eruptions send powerful bursts of energy and material into space. This activity can have effects on Earth. For example, eruptions can cause lights in the sky, called aurora, or impact radio communications. Extreme eruptions can even affect electricity grids on Earth.” 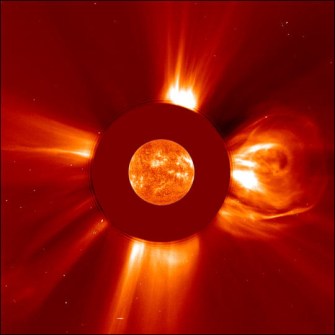 An image of a coronal mass ejection observed by NASA’s Solar and Heliospheric Observatory, or SOHO, satellite in 2001. Image source: ESA/NASA/SOHO

Because of these effects, scientists do their best to forecast solar activity:

“Some cycles have maximums with lots of sunspots and activity. Other cycles can have very few sunspots and little activity. Scientists work hard to improve our ability to predict the strength and duration of solar cycles. These predictions can help them forecast these solar conditions, called space weather. Forecasting of the solar cycle can help scientists protect our radio communications on Earth, and help keep NASA satellites and astronauts safe, too.”

The ISS and its astronauts won’t be hurt by increased solar activity, but they will likely have a better chance of seeing auroras — commonly known as the northern lights. 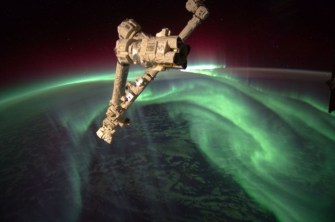 In November, NASA astronauts aboard the ISS plan to grow Española chili pepper plants. If successful, it will be the first fruit grown in space by the space agency. The ability to grow nutritional food in space would be a necessity for long-distance space missions.

“We were also looking for varieties that don’t grow too tall, and yet are very productive in the controlled environments that we would be using in space,” NASA plant physiologist Ray Wheeler told Dylan Bida at the Rio Grande Sun. “The astronauts have often expressed a desire for more spicy and flavorful foods, and so having a bit of hot flavor also seemed to be a good thing. Plus, many peppers are very high in vitamin C, which is important for space diets.”

Our moon may someday become a small planet, say researchers — a ‘ploonet’

She may not be ours forever.