NASA’s Parker Solar Probe has come closer to the sun than any human spacecraft before it, managing to enter the star’s atmosphere to record data for the ambitious mission.

On November 8, the probe soared within about 15 million miles of the sun’s surface. To illustrate how close that is, NASA researchers wrote: “If Earth was at one end of a yard-stick and the Sun on the other, Parker Solar Probe will make it to within four inches of the solar surface.”

During the encounter, the probe’s wide-field imager snapped the closest-ever photo of the sun emitting solar material, in an event known as a coronal streamer. 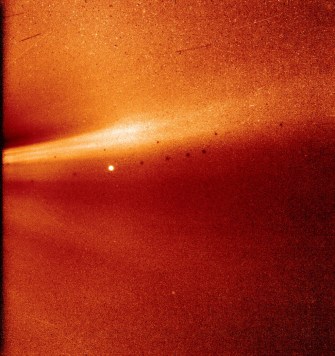 These events usually occur over regions undergoing increased solar activity, and this one appeared over the east limb of the sun and includes at least two visible rays. Jupiter, the bright spot toward the center of the photo, is also visible in the background.

The photo was shared at a meeting of the American Geophysical Union earlier this week.

“Heliophysicists have been waiting more than 60 years for a mission like this to be possible,” said Nicola Fox, director of the Heliophysics Division at NASA Headquarters in Washington. Heliophysics is the study of the Sun and how it affects space near Earth, around other worlds and throughout the solar system. “The solar mysteries we want to solve are waiting in the corona.”

What the Parker probe mission hopes to accomplish

The Parker Solar Probe is on an exploratory mission that could yield surprising findings for scientists, namely because no one’s quite sure what exactly happens when a spacecraft gets so close to the sun. NASA hopes the mission will address three key questions:

“First: How is the sun’s outer atmosphere, the corona, heated to temperatures about 300 times higher than the visible surface below?” NASA wrote in a blog post. “Second — how is the solar wind accelerated so quickly to the high speeds we observe? And finally, how do some of the sun’s most energetic particles rocket away from the sun at more than half the speed of light?”

Why Won’t it Melt? How NASA’s Solar Probe will Survive the Sun

To answer these questions, the Parker probe must match the speed of the sun’s rotation so it can hover over areas of interest, meaning it must fly faster than 213,000 miles per hour. Learning more about the star is important, given its tremendous influence on our planet and those in our solar system. NASA writes:

“The solar wind, its outflow of material, fills up the inner part of our solar system, creating a bubble that envelops the planets and extends far past the orbit of Neptune. Embedded in its energized particles and solar material, the solar wind carries with it the Sun’s magnetic field. Additional one-off eruptions of solar material called coronal mass ejections also carry this solar magnetic field — and in both cases, this magnetized material can interact with Earth’s natural magnetic field and cause geomagnetic storms. Such storms can trigger the aurora or even power outages, and other types of solar activity can cause communications problems, disrupt satellite electronics and even endanger astronauts — especially beyond the protective bubble of Earth’s magnetic field.”

This week, NASA published the first images taken of its Mars InSight lander, which touched down on the red planet in November and is designed to help scientists learn more about the formation of rocky planets. The images were taken from HiRISE, a camera onboard NASA’s Mars Reconnaissance Orbiter (MRO). 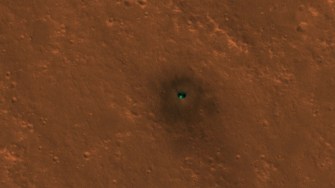 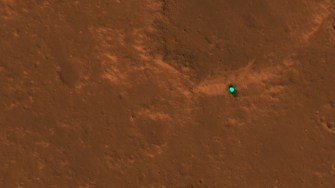 Childhood trauma can affect a child’s brain in dramatic ways for the rest of their lives.