Demonstrating again that space is a limitless reservoir of scientific wonders, a new study discovered why areas hosting black holes and neutron stars emit strange bright glows. Astrophysicists found that turbulence and reconnection of super-strong magnetic fields are behind the cosmic mystery.

The cause of the phenomenon, which illuminates these super-dense parts of space, has been attributed previously to high-energy electromagnetic radiation. Scientists speculated that it’s created by electrons moving at just about the speed of light. The new study from researchers at Columbia University explained why these particles accelerate.

Astrophysicists Luca Comisso and Lorenzo Sironi carried out the research by running some of the largest super-computer simulations ever conducted in this area. They managed to calculate the trajectories of hundreds of billions of charged particles.

Comiso, a postdoctoral research scientist at Columbia, explained their conclusion:

“Turbulence and magnetic reconnection—a process in which magnetic field lines tear and rapidly reconnect—conspire together to accelerate particles, boosting them to velocities that approach the speed of light,” said Comisso in a press release.

As Comiso further described, the space region that is home to black holes and neutron stars is also full of a super-hot gas of charged particles. Their chaotic motion affects magnetic field lines and results in “vigorous magnetic reconnection”. This, in turn, creates an electric field which accelerates particles to energies that are “much higher than in the most powerful accelerators on Earth, like the Large Hadron Collider at CERN,” added Comisso.

Interestingly, the simulations showed that the particles gathered most of their energy through the process of random bouncing at super-high speeds.

“This is indeed the radiation emitted around black holes and neutron stars that make them shine, a phenomenon we can observe on Earth,” said Sironi, the study’s principal investigator and an assistant professor of astronomy at Columbia.

Next, the scientists plan to confirm their findings by comparing them to the electromagnetic spectrum from the Crab Nebula, a bright remnant of a supernova.

You can check out the study published in the December issue of The Astrophysical Journal. 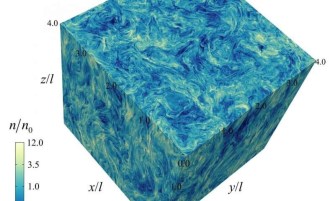 Nature is a whole. The sciences should be, too.
Up Next
Smart Skills