James Allison and Tasuku Honjo have won the 2018 Nobel Prize in Physiology or Medicine for their innovative work in developing immunotherapy treatments to fight cancer.

James P. Allison, 70, is the chair of the department of immunology at MD Anderson Cancer Center in Houston, Texas, and Tasuku Honjo, 76, is a professor at the Kyoto University Institute for Advanced Study in Japan. In the 1990s, the two scientists made separate breakthrough discoveries about the immune system that led to the development of immunotherapy drugs. They will share the $1 million prize.

Allison was in New York for an immunology conference when his son called early one morning to tell him the good news. An hour later, Allison and his colleagues were celebrating in a hotel room over champagne.

“It still hasn’t completely dawned on me,” said Allison, at a press conference. “I was a basic scientist. To have my work really impact people is one of the best things I could think about. It’s everybody’s dream.”

Honjo also spoke about the personal satisfaction he gets from seeing his work benefit patients.

“When I’m thanked by patients who recover, I truly feel the significance of our research,” Honjo said during a news conference at the Japanese university, according to Japanese news reports. He added: “I’d like to continue researching cancer for a while so that this immunotherapy will help save more cancer patients than ever before.”

Immunotherapy effectively removes the ‘brakes’ on the body’s immune system, allowing for a certain type of white blood cell, called T-cells, to hunt down and kill cancer cells. Without immunotherapy treatment, cancer cells can deactivate T-cells by taking advantage of a switch on the cells, called an immune checkpoint. This shuts down the body’s immune response and allows the cancer to spread unchecked.

The development and testing of immunotherapy drugs is still in early stages. However, immunotherapy has shown promising signs in recent years in combating several types of cancer, particularly lung cancer, even reversing the disease completely in some patients. 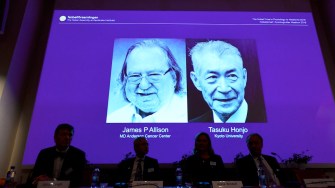 Many scientists have helped develop the field of immunotherapy, but the work of Allison and Honjo helped build a foundation from which it could grow.

“I think they really deserve it,” Jerome Galon, an immunologist at the Paris-based national biomedical research agency INSERM, told Nature. “You can always multiply and have many other people, but these are the obvious two first choices.”

Their work “brought immunotherapy out from decades of skepticism” and has led to treatments that have improved an “untold number of people’s health,” Dr. Jedd Wolchok, a cancer specialist at Memorial Sloan Kettering Cancer Center in New York, told The New York Times.

The Nobel committee wrote that scientists have been searching for ways to bolster the immune system against cancer for more than a century, but the progress was “modest” until the revolutionary work of Allison and Honjo.

“Allison’s and Honjo’s discoveries have added a new pillar in cancer therapy. It represents a completely new principle, because unlike previous strategies, it is not based on targeting the cancer cells, but rather the brakes — the checkpoints — of the host immune system,” Klas Kärre, a member of the Nobel Committee and an immunologist at the Karolinska Institute in Stockholm, said in a statement. “The seminal discoveries by the two laureates constitutes a paradigmatic shift and a landmark in the fight against cancer.”

Researchers at the Max Planck Institute have pinpointed a neurological trend in those genetically predisposed with depression.