Ph.D. students appear to experience more symptoms of common psychiatric disorders like depression than their highly educated counterparts.A recent study surveyed 3,659 students enrolled in Ph.D. programs at universities in Flanders, Belgium. About half reported recently experiencing at least two symptoms of poor mental health. Worse, one third of students said they had experienced at least four symptoms – more than double the prevalence reported among highly educated comparison groups. The most frequently cited symptoms were feelings of depression or unhappiness, constant strain, loss of sleep due to rumination, and an inability to overcome difficulties and enjoy day-to-day activities. Participants reported that a number of factors contributed to their symptoms, but interestingly, the greatest predictor of psychological distress was when work prevented students from meeting the needs of their families.

Still, the authors said their findings don’t allow them to draw conclusions about the exact cause of the problems. 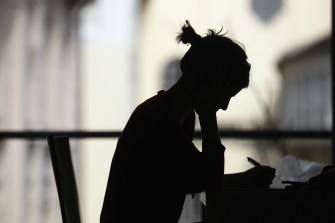 A few things seemed to help curb the reported symptoms. Students with inspirational supervisors, an interest in an academic career, and a well-defined career plan seemed to exhibit less symptoms of poor mental health.

“When people have a clear vision of the future and the path that they are taking, this provides a sense of meaningfulness, progress and control, which should be a protective factor against mental health problems,” the authors wrote.

As far as what universities can do, researchers suggest they increase efforts to help students achieve a healthy work-family balance and workload, and that they train supervisors to adopt constructive leadership styles.

Our findings also suggest that universities might benefit from offering PhD students clear and full information on job expectations and career prospects, both in and outside academia.

What makes some of us more susceptible to conspiracy theories than others? It may have to do with our level of education.