When Badlands National Park staff tweeted data regarding climate change in response to the Trump administration’s social media ban on the National Park Service, they were quickly forced to delete the tweets. Still, point made: you’re not entitled to your own alternative facts.

An ‘unofficial resistance team’ inside the White House recently created its own ‘rogue’ Twitter account to respond to the barrage of executive orders streaming from Trump’s pen. We cannot verify the actual tweeter: “We will not reveal our identity to anyone!” Given its 587,000 followers in one week, this is a further sign that the battle for truth is being waged. 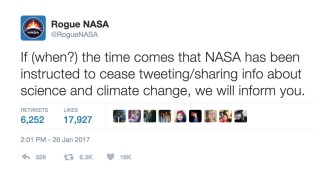 Really, this is a war on narrative. Humans are, in the words of literary scholar Jonathan Gottschall, a ‘storytelling animal.’ Interestingly, our brains are not constructed for story. Gottschall argues that “glitches in its design” make us vulnerable to the seductive power of narrative.

Consider how stories originate. The earliest human communications were pantomimes, facial cues, monosyllabic utterances, perhaps music — percussion would have been simplest given you keep rhythm with your hands, though flutes date back pretty early as well.

Whatever its roots, language soon became a vehicle for communication. To best transmit these tales we had to memorize them, which is why mythological epics are mnemonic devices. Our brain remembers information easier by chunking, putting verse into categories to create a meaningful story. If something sounds like something else—in this case, rhyming—we’re more apt to recall it. 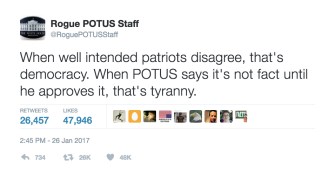 This is a hallmark of Trump’s campaign: unforgettable sound bytes that stick to its intended target. While many accuse him of lacking intellectual prowess—misspelled words with poor grammar are rampant on his Twitter feed—he tapped into a deeply embedded psychological trait to exploit his audience.

Anthropologist Steven Mithen understands this technique. If language was indeed social, the application of language skills to the non-social world (toolmaking, shelter construction, politics) gave early adopters an upper hand—most likely why members of clergy were exclusively male. Control the books, control the language, you control the knowledge. Steve Bannon’s demand that the media shut up makes more sense in this light. Mithen continues:

The chapel of social intelligence began to be invaded by non-social information. Those individuals who could exploit these invasions to increase their own knowledge about the non-social world would have been at a selective advantage.

Mithen observes that we still predominantly talk about social issues, or, in modern parlance, gossip. By definition gossip need not be true; alternative facts have always been part of that compulsion. Before language, humans relied on direct habitual observation in order to communicate. Television closed the visual distance between individuals. Suddenly the person on the screen is right beside you. How else could a quarter of Americans, many struggling financially, ‘relate’ to a billionaire real estate mogul?

Gottschall points out that stories have historically been about problems. Joseph Campbell also noticed this trend in global mythological traditions. The ‘hero’ had to surmount an obstacle, be it an existential dilemma or transformative combat with evil. Since we all confront personal struggles, we relate to others who share similar narratives, regardless of the truth of the story.

Though we desire a happy ending—an innate optimism bias—our brains are tuned to notice environmental dangers, just as our body does not alert us while in homeostasis, though an abnormal heart murmur quickly rises to the level of consciousness. The seduction of danger, be it a shady immigrant or the shadow of a terrorist, stimulates us to action. In this case perception is reality.

Gottschall calls this the ‘problem structure,’ the main drivers of narratives, great predicaments of human nature. This structure, he continues, “suggests that the human mind was shaped for story, so that it could be shaped by story.”

What are we other than the collection of our stories? Where do we learn these stories other than those around us, the leaders and parents and peers we choose to pay attention to? The core of who we are is nothing but a collection of personal memories. Since our memories are constantly rewritten during recall, we’re writing (and editing) reality every day.

Alternative facts are nothing new. What’s changed is the avalanche of opinions regularly passing in front of our eyes. Like the rest of Trump’s campaign, his administration is exploiting cognitive quirks, the longstanding tradition of ignoring facts for an appealing narrative. Rogue accounts are one antidote, but as with any story, willing eyes are needed for that tale to succeed. In the end it’s a battle for narrative. In a world of competing platforms whose story wins is anyone’s guess.

Humans won’t survive if we stay on Earth. Michio Kaku explains.
▸
7 min
—
with
Michio Kaku
Up Next
Technology & Innovation

Tabletop Physics May Be About to Find Answers Supercolliders Can’t

A new generation of tabletop physics devices may be the next forefront for breakthrough discoveries.