Anyone who has gone through cancer treatment or known someone who has, has seen how detrimental the side effects can be. My mother happens to be going through chemotherapy right now for breast cancer. Although it was an aggressive variety, they caught it early. It was surgically removed and she’s going through chemo only to avoid recurrence. Though I’m thankful for that, the chemo still makes her dreadfully nauseous and weak.

There are drugs to offset its effects, but unfortunately she, like many others, can’t take them. The side effects were so severe that now, she’s getting half the dose originally prescribed. If they stuck with the full dose, she might not survive, the doctor said. My mom is halfway through and after four more treatments, she’ll have radiation to look forward to. Fortunately, her doctors have given her a 90% chance it won’t come back. Others are not so lucky.

The problem is that treatments like chemo and radiation attack healthy and malignant tissue indiscriminately. Because of this, researchers have been seeking out ways to target cancer cells while leaving healthy ones alone. Photodynamic therapy is one approach. Here, an inert drug is usually inserted inside a tumor then activated by light or a laser, destroying the cancer while minimizing collateral damage. Another method just starting to be explored is employing nanotechnology. 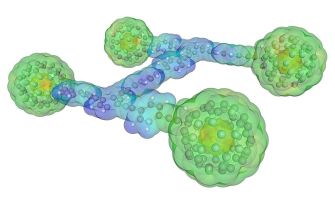 Now, a collaborative effort among researchers at Rice, Durham, and North Carolina State Universities is getting a lot of attention. Their novel method could eliminate the suffering cancer patients go through today. They’ve developed molecular machines which can drill into and destroy cancer cells, leaving health ones untouched. The results were published in the journal Nature. These drills are miniscule. 50,000 of them end-to-end would equal the width of a human hair. They’re also photodynamic.

The way they work is, once in place, the nanomachines are activated via ultraviolet light. They drill down into a cancer cell, killing it. It was only last year that Bernard Feringa won the Nobel Prize for creating the world’s first electric drill on a nanoscale. These researchers built theirs off of that design. Feringa’s was a thousand times smaller than the diameter of a hair, which although still impressive, seems huge by comparison. 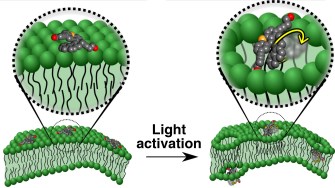 On the left, the nanodrill sits atop a cell membrane. On the right, it’s been activated. Rice University.

These latest nanomachines are each a single rotor which completes 2-3 million rotations per second. Previous prototypes spun slower, but they had a hard time overcoming Brownian motion. This is the forceful erratic movement of microscopic particles within fluid, due to a constant bombardment on many sides by surrounding particles.

Besides its powerful drilling capability, each nanomachine carries a certain peptide with it to ensure the cancer’s demise. These nanodrills were tested on prostate cancer cells. It took between one to three minutes for the drill to break through each cell’s membrane and demolish it.

See them in action here:

Dr. Robert Pal led the study. He hails from Durham University in the UK. “Once developed,” he said, “this approach could provide a potential step change in non-invasive cancer treatment and greatly improve survival rates and patient welfare globally.” Not only would it be used to treat a wide variety of cancers, it could end the days of suffering through side effects.

So far, tests on human and animal cells have been successful. But years of further research lie ahead, before these nanodrills are introduced into the clinical sphere. Next will be tests on microbes and small fish, followed by mice and rats. If all goes well, human trials will follow. Researchers say that not only are these nanomachines useful for killing cancer, in the future, such machines may also engage in cell repair as well.

Nanotech, when it really comes of age, is likely to disrupt not only medicine but the energy sector and others as well. Could nanotech lead to a kind of utopia, free of pollution, disease, and even want?

David Julius and Ardem Patapoutian were awarded the highest honor in medicine for their research into how human bodies make sense of and respond to the outside world.
Health

The new brain tumor treatment targets a cancer that kills 75% of patients within a year.
Hard Science

Engineered immune cells have prevented Type 1 diabetes in mice.
Up Next
Technology & Innovation