Imagination is one of our most fertile sources of creativity and positive emotional health. The ability to imagine many possibilities during a Rorschach test is indicative of a functional mind open to the possibilities. Unfortunately, trauma stamps out those possibilities. Some veterans, due to traumatic physical or emotional experiences, are unable to portend future scenarios; instead, they replay their personal reel of history over and over.

This phenomenon is not exclusive to war. As a massage therapist friend used to say, “Your issues are in your tissues.” Again, this covers the gamut of physical and emotional malaise. Access to health care — immediate in the case of emergency trauma; long-term for chronic mental health conditions — should be universally provided in wealthy nations such as America. But it is not.

We live out trauma in crippling ways. Victims of sexual and physical abuse often find it difficult to imagine a future brighter than their past. Everyone carries the sordid influence of history; if our background involves traumatic incidents, the likelihood we’ll become “stuck” greatly increases the possibility that we’ll never overcome those instances. They become defining moments in our psychological outlook.

Long-term trauma can result from accidents or intentional attacks: gunshot wounds, heart attacks, muggings, spousal abuse, child abuse. You need not be the victim for repeated incidents to affect your mindset. Living in an environment where repeated instances create chronic trauma affects how your view your future, which is why trauma can be geographical as well.

Last week, I wrote about food deserts, neighborhoods at least one mile from retail grocery stores that offer fresh fruits and vegetables in cities and 10 miles away in rural areas. Limited access to healthy food feeds into obesity rates (among other health problems); it also inspires psychological malaise, as nutrition is influential in outlook.

The Fight For Trauma Care on Chicago’s South Side

The Fight For Trauma Care on Chicago’s South Side

Food deserts predominantly affect minority populations. Correlation seems implausible. In a media age where “reverse racism” is treated by some outlets as a serious cause of concern, data are sobering reminders that we’ve not progressed that far in creating an equal playing field. Trauma is another indicator, in accident and attacks as much as systemic mental health challenges.

Let’s consider immediate trauma care. A new study from the University of Chicago Medicine, published last week in Journal of the American Medical Association’s Network Open, asked one pressing question: Is there an association between race/ethnicity and access to trauma care in U.S. cities? Their answer is yes.

This research was inspired by the university’s new Level 1 Trauma Center, which has led to a seven-fold reduction in the disparity in the city’s access to care, which the team calls trauma deserts — urban communities at least five miles away from an emergency services.

Located in Hyde Park, the last trauma center in Chicago’s south side was closed in 1991. The new center is part of the university’s $270 million overhaul. The 18 surgeons and specialists employed at the center were hired to address chronic violence and other health issues in the neighborhood.

Access to such care, according to the study’s first author, Elizabeth Tung, is racial in nature:

“So much of the advocacy for the trauma center was framed in terms of racial equity. But we realized no previous studies had addressed trauma access through the lens of race/ethnicity — not just looking at Chicago, but comparing our city to other communities as well.” 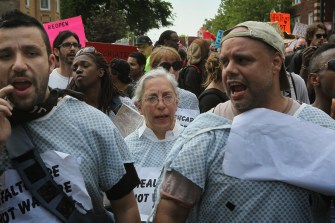 The team investigated trauma deserts in Chicago, New York, and Los Angeles. They focused on African-American census tracts to pinpoint communities where trauma care is lacking. In Chicago, 73 percent of census tracts featured predominantly black populations; in Los Angeles, that number jumped to 89 percent; in New York, it was only 14 percent. The researchers noted that in Chicago trauma deserts also greatly affected the Latino population, though that was not the case for New York or Los Angeles.

Before the Level 1 Center opened last May, African-Americans in Chicago were 8.5 times more likely to live far away from trauma access than white census tracts. That number has been reduced to 1.6 times (seven-fold decrease) thanks to the new center.

“Even though we had a sense that this was a racially divided issue, the data confirmed that this was the case in a significant way. It was pretty startling.”

African-Americans (along with Latinos and Asians) are less likely to have access to mental health facilities as well. This is not a separate phenomenon from access to emergency services. The American deserts share similar qualities: lack of access to holistic medical treatment and healthy food. Again and again, these deserts exist along racial lines.

As the researchers conclude, more emphasis needs to be placed on institutions and governments that serve these communities:

“The distribution of trauma centers along racially disparate lines may raise concerns about the legacy of structural inequality that places black lives at higher risk in U.S. cities. Trauma care planning should explicitly address racial equity in the financing of life-saving resources.”

Is there such a thing as an anarchist capitalist?

The two concepts might seem contradictory, but anarcho-capitalists exist.