There are no respirators in space. As concerned as you may be at the moment about coronavirus following you into your personal quarantine, imagine getting COVID-19 in space, trapped in a vehicle far above the nearest hospital. As the next planned mission to the International Space Station (ISS) on April 9 gets closer, it’s reasonable to wonder what can be done to protect astronauts already aboard from the potentially catastrophic arrival of the coronavirus.

As of March 17, NASA has no plans to cancel or postpone this or any other planned missions in the near future. While the situation is continually being reassessed, the agency has a number of measures in place to protect the crews involved. 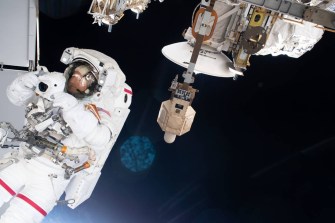 Taking a picture outside the ISS

It’s comforting to know that NASA has for some time been careful about allowing germs aloft. Before every mission, dating back to the Apollo 14 launch in 1971, crew members heading for orbit must first spend two weeks in a “health stabilization” quarantine. Prior to its implementation, pre-flight illnesses were a concern and a relatively common occurrence.

Prior to entering the quarantine for the upcoming mission, NASA will be testing crew members for coronavirus infection.

One of the mission’s crew is a cosmonaut from Kazakhstan (the location of the launch site). This past weekend, the nation reported its first coronavirus test and then closed its borders to outsiders.

NASA’s team will be allowed entry, though the launch personnel roster is being pared down to as few people as possible. Safe travel arrangements are still being assessed. No reporters will be allowed to attend the launch, and the Russian state space corporation, Roscosmos, will take the unusual step of live-streaming the launch, as NASA usually does. 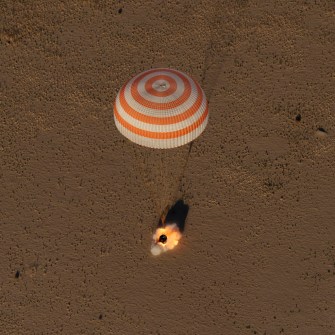 Soyuz MS-08 landss near the town of Zhezkazgan, Kazakhstan in 2018

Coming home from the ISS

In the middle of April, a return for some ISS crew members is on the calendar. Expected to land aboard a Soyuz capsule are presumably virus-free Andrew Morgan and Jessica Meir from the U.S, and Russian cosmonaut Oleg Skripochka. The capsule will come down in the Kazhak desert, a type of landing that in normal times requires a large number of recovery personnel to retrieve returning crew. NASA has not yet announced plans to modify this cohort of rescuers. 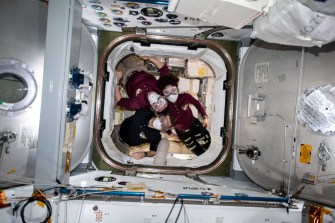 Perhaps the most worrying upcoming mission is the one planned in cooperation with SpaceX and currently scheduled for May. So far, things are proceeding as planned, though SpaceX founder Elon Musk last week sent an alarming email to employees. In it he downplayed the seriousness of coronavirus, arguing that more people die in car crashes. His commentary raises concerns regarding whether or not SpaceX can be relied on to proceed with the requisite level of caution.

The mission is an important one. It’s a key step in NASA’s Commercial Crew Program, marking the first time a privately-funded vehicle would be transporting people to and from the ISS. SpaceX’s Crew Dragon capsule has already paid one visit to the space station, successfully docking on March 9 as shown in the photo above.

As far as NASA’s Earth-bound employees go, the agency has a four-stage classification system for how and where to work. The coronavirus response framework (above) covers Central Access, Health & Safety, Meetings & Events, and Travel.

So as of now, NASA’s plans for the next three missions remain on-track, with modifications made where possible in response to COVID-19 challenges. Of course, things are changing almost daily, and NASA has made it clear that they plan to continually re-assess their mission plans as events warrant.

Do aliens dream about meeting us, too?
▸
with
Jill Tarter
Health

Rituals come as much from religion as they do from the way Earth spins around the Sun.
▸
4 min
—
with
Sasha Sagan
Up Next
Health

By 2050, the U.S. Alzheimer’s population will double. We’re not prepared.

The Alzheimer’s Association says its new analysis and surveys “should sound an alarm regarding the future of dementia care in America.”