E-cigarettes are, in all likelihood, better for your health than smoking cigarettes. There’s a general agreement among the medical community that vaping exposes people to fewer toxic chemicals than cigarettes, but that doesn’t mean they’re consequence-free.

For one, e-cigarettes use a different cocktail of chemicals than cigarettes, which, even if they’re fewer in number, may be of a more dangerous variety. But more importantly, cigarettes have had the benefit of many decades worth of research; e-cigarettes are simply too new for us to know what the long-term consequences will be.

That being said, there is some empirical evidence as to the negative health effects of e-cigarettes. Here’s what we know so far.

The main appeal of e-cigarettes is that they deliver nicotine, which functions as a stimulant, ensuring both that e-cigarettes are enjoyable and addictive. However, even by itself, nicotine can do a number on your body.

It’s been implicated in cardiovascular diseases such as coronary artery disease, atherosclerosis, and aortic aneurysms. Though nicotine is not a carcinogen in and of itself, new research suggests it promotes tumor growth, the formation of blood vessels that supply tumors with nutrients, and metastasis. Hopefully this doesn’t need to be said, but it’s also quite unhealthy for pregnant mothers and young children.

Exposure to metals from e-cigarette coils

Most e-cigarettes produce an aerosol by heating an e-liquid with a metal coil. These coils are made out of a variety of metals, with the majority made out of Kanthal (an alloy of iron, chromium, and aluminum) and nichrome (an alloy of nickel and chromium). A 2018 study found that the metals associated with these heating coils were leaching into the liquid solution — and, commensurately, into the bodies of the people inhaling them — at unsafe levels. Chronic exposure to such metals has been linked to lung, liver, heart, and brain damage, and may also depress immune function and increase cancer risk. 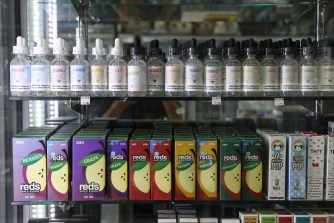 E-liquids for use in vaporizers on display. Image source: Justin Sullivan / Getty Images

The cocktail of flavoring agents

One of the biggest concerns with vaping is the chemicals used to flavor e-liquids. While many chemicals used in e-cigarettes are labelled as safe for human consumption by the FDA, typically, this labeling applies to their ingestion. Inhaling them may have very different consequences. While there are far too many to go through individually, a few stand out:

Cinnamaldehyde — which, as you may have guessed, has a cinnamon-like taste — has been found to be significantly toxic. Four very common flavoring agents — vanillin, ethyl maltol, ethyl vanillin, and methol — are either carcinogenic or toxic and contribute to cardiopulmonary and neurodegenerative diseases. In general, many of the sweeter flavorings tends to be more toxic. Diacetyl is sometimes found in flavored e-liquids, which provides a sort of buttery flavor. Originally, it was used in microwave popcorn, but manufacturers stopped including it when it was revealed to contribute to bronchiolitis obliterans, also known as popcorn lung.

While flavoring chemicals can vary from e-liquid to e-liquid, propylene glycol (PG) and vegetable glycerin (VG) are essentially universal. As mentioned above, these are considered non-toxic when ingested, but their toxicity when inhaled is not clear. Some research, however, has been conducted on these chemicals.

One study, for instance, focused on testing a wide variety of e-liquid chemicals on cell cultures. Based off of the reduced rates at which the treated cells grew, the researchers could then evaluate the toxicity of e-liquid chemicals on those cells. In addition to testing a number of flavoring compounds, they also tested a pure PG/VG treatment, and found that it significantly impacted cell growth.

That being said, the evidence isn’t entirely conclusive on PG/VG’s toxicity. Another study, for instance, found no toxic effects in mice exposed to aerosolized PG/VG. Ultimately, the preliminary evidence seems to suggest that inhaling PG/VG over the short-term is not toxic, but there is a serious lack of data on their effects over the long-term.

There’s another potential concern related to PG/VG in e-cigarettes: formaldehyde exposure. When PG/VG is heated, it can become oxidized to produce carbonyl compounds, such as glyoxal, acrolein, acetaldehyde, and formaldehyde, especially at higher wattages. However, a report by the Royal College of Physicians states that “In normal conditions of use [i.e., low wattages/temperatures], toxin levels in inhaled e-cigarette vapour are probably well below prescribed threshold limit values for occupational exposure.”

Ultimately, vaping can be said to be safer than smoking traditional cigarettes, but it’s clearly not harmless. If you use e-cigarettes and are concerned about the toxicity of the chemicals in your e-liquid, the Center for Tobacco Regulatory Science and Lung Health maintains a database on the toxicity of a variety of e-liquid brands at eliquidinfo.org

The separation of conjoined twins is fraught with stomach-churning biomedical and ethical challenges.
Up Next
High Culture

Maya Angelou will be commemorated in a new permanent art installation in San Francisco. Poet and novelist, Angelou had a storied relationship with the city. She attended the George Washington […]