If you spent many hours playing Pokémon as a kid, there’s a good chance your brain developed a dedicated region responsible for recognizing the “pocket monsters,” according to a new study published in Nature Human Behaviour.

What inspired such a study? Research shows that the visual cortex in humans has a specific region that responds strongly when people look at faces. (Evolutionarily, this is advantageous because being able to quickly distinguish faces can help you tell friend from foe.) Similarly, certain parts of our visual cortex respond when we look at natural scenes or words. It’s thought that these parts of the visual cortex form when we’re young, during a critical developmental window during which our brains have an especially high level of neuroplasticity.

That’s the theory, at least. The team behind the recent study wanted to identify that critical developmental window in humans, and to see “which dimensions of visual information constrain the development and topography of this shared brain organization,” they wrote. To do that, they needed a specific visual stimuli that many adults would’ve spent hours looking at as children. Enter Pokémon Red and Blue, a game in which players familiarize themselves with dozens and dozens of distinct, monster-like creatures.

In the study, the researchers recruited two groups of participants: adults who played Pokémon as kids and adults who hadn’t. Using fMRI, the researchers scanned the brains of each group as they were shown images of various things: cartoons, faces, corridors, and Pokémon. 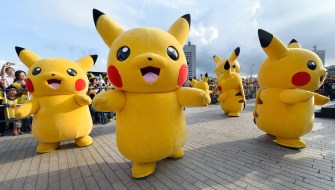 The results showed that only the group who played the game had a specific part of the brain that responded to the sight of Pokémon. What’s more, this group also responded to locations in the game, specifically through “place-selective activations,” meaning their brains effectively categorized areas in the game as real-world locations. The team suggested that the eccentricity of Pokémon — the animation style, size of the creatures and objects — is what drives young brains to develop a Pokémon-selective region.

“The current finding of a Pokémon-preferring brain region really drives home just how amazing the plasticity of our developing visual system is,” wrote Daniel Janini and Talia Konkle of Harvard University in a news comment on the paper.

The findings could help improve treatments for conditions such as autism. For example, people with autism often avoid making eye contact and have trouble recognizing faces. This might be because children with autism don’t look at faces in the same way as other children do during a critical time when their young brains are developing. If further studies confirm the recent findings, specialists might be able to create interventions that encourage the development of face-selecting regions in the brain.

Only 2% of Alzheimer’s is 100% genetic. The rest is up to your daily habits.
▸
9 min
—
with
Lisa Genova
Up Next
High Culture

“I share this honor with ancestors and teachers who inspired in me a love of poetry,” the 68-year-old poet said.