In just a few short weeks, we’ve all made the collective journey from pandemic ignoramuses to budding armchair virologists with a decent grasp of once-arcane terms like personal protective equipment, social distancing and “flatten the curve”.

But there’s one phrase that might still leave a few justifiably scratching their heads: the R number. The coronavirus has one, and governments around the world are keen to see it shrink as much as possible. But what is it?

R refers to the “effective reproduction number” and, basically put, it’s a way of measuring an infectious disease’s capacity to spread. The R number signifies the average number of people that one infected person will pass the virus to.

The R number isn’t fixed, but can be affected by a range of factors, including not just how infectious a disease is but how it develops over time, how a population behaves, and any immunity already possessed thanks to infection or vaccination. Location is also important: a densely populated city is likely to have a higher R than a sparsely peopled rural area.

Because Sars-CoV-2 – to give the novel coronavirus its full honorific – is a new pathogen, scientists at the start of the outbreak were scrambling to calculate its R0, or “R nought”: the virus’s transmission among a population that has no immunity. Studies on early cases in China indicated it was between 2 and 2.5; more recent estimates have placed it as high as 6.6.

To put these figure in context, says Wired science editor Matt Reynolds, they’re worse than seasonal flu, which has an R0 of 1.3, but miles better than measles, whose R0 is between 12 and 18. The kicker, though, is that for each of those diseases we have a vaccine, and so the effective reproduction number – the R – is way below 1.

This threshold – an R of 1 – will become increasingly crucial over the next few months. As the UK government explained in the video that accompanied its press briefing on 30 April, an R figure that is even slightly over 1 can lead quickly to a large number of cases thanks to exponential growth.

Here’s how that works. Say a disease has an R of 1.5. This may seem like a manageable figure, but a glance at the figures quickly proves that isn’t the case. An R of 1.5 would see 100 people infect 150, who would in turn infect 225, who would infect 338. In three rounds of infection, the number of people with the virus would have more than quadrupled to 438. As worldwide cases now exceed 3.5 million, this helps explain why the novel coronavirus was able to rip so quickly among a global population with no previous immunity. 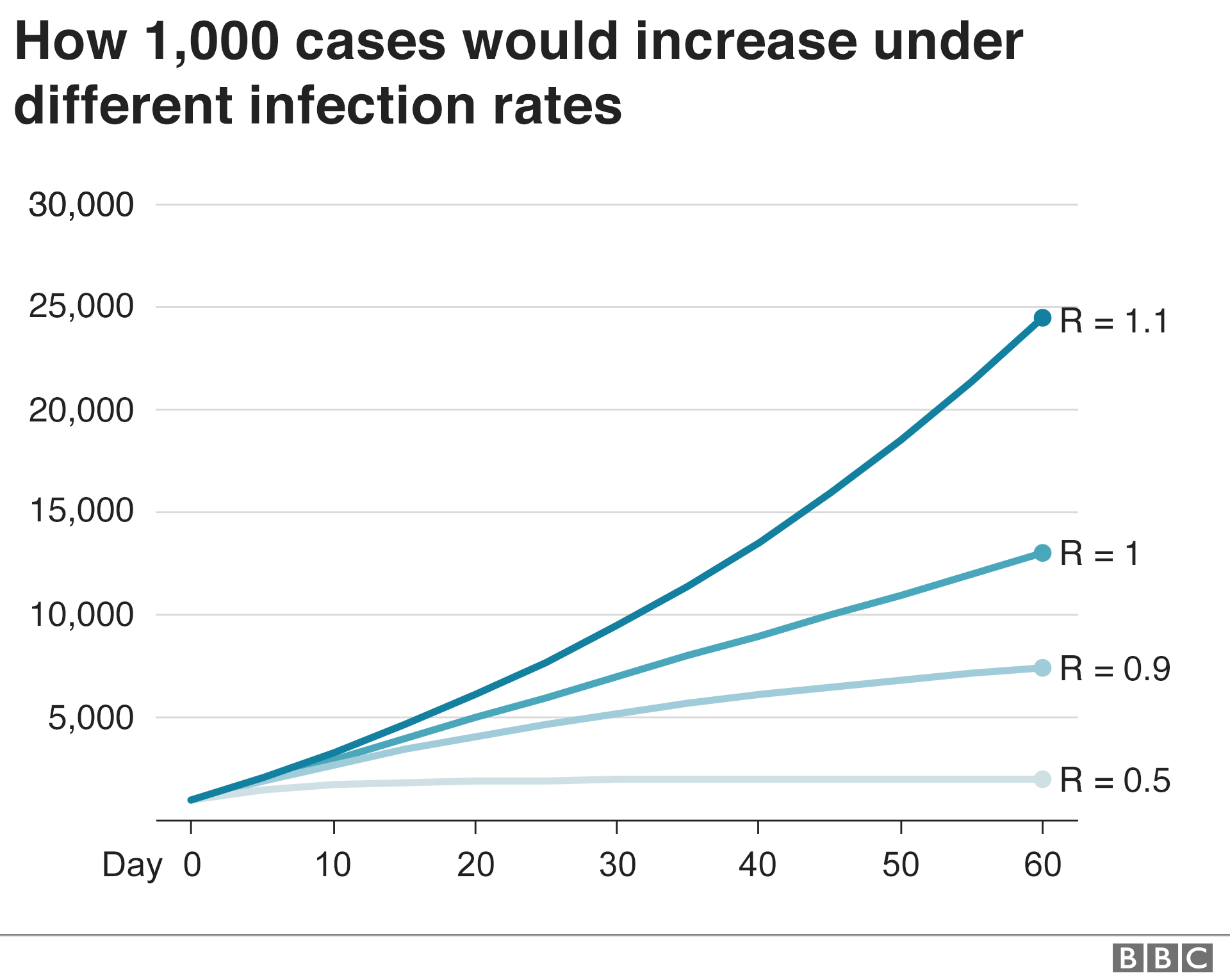 The ongoing battle to reduce R

So an R of 1 and above tends towards exponential growth. An R of below 1 tends towards the end of the outbreak. All we need to do is keep the R below 1. Simple, right?

Not so fast. As stated above, the R value is ever-changing. Thanks to lockdown measures, many governments have been able to push R to below 1. In the UK, chief scientific officer Patrick Vallence said that the nation’s R number is currently thought to be between 0.6 and 0.9, though it varies regionally and in London could be as low as 0.5 to 0.7.

This was only achieved, however, thanks to a heroic, unprecedented series of adjustments which have brought our lives and our economies to a juddering halt – and all of this to produce an R of 0.6 to 0.9. This doesn’t give us a huge amount of leeway.

Lockdown helped drop Germany’s R down to about 0.7 in early April, but researchers at the Robert Koch Institute in Berlin said it had recently increased back to 0.9, before sinking again to 0.75. Even within lockdown, if people start losing patience with restrictions or need to go out to work, R could quickly rise again.

Another difficulty that scientists and policymakers are facing is that it’s still not entirely clear how much of a role each measure plays. Is shutting schools doing the heavy lifting, or restricting access to shops? How much of a boost could wearing masks provide?

As governments tentatively ease lockdown restrictions around the world, they will be monitoring R very carefully for signs of a sudden jump. If R sneaks above 1 even a fraction, it could trigger a damaging second wave of the virus.

Once R is consistently low and the number of cases is manageable, governments can implement more precise measures to restrict R, such as contact-tracing and location-tracking apps – approaches that paid dividends when introduced early on in nations such as South Korea and Singapore.

There are a number of ways to calculate R, as Wired notes. One is by monitoring hospitalisation and death figures to get a sense of how many people have the virus – but the problem with this is that, since the virus’s incubation period is so long, it only gives an accurate picture of a few weeks ago. To check transmission rates in a more accurate way, scientists at Imperial College London in the UK have started testing randomised 25,000 groups of the population to see how many are ill.

An additional key measure to look out for is the number of ICU beds available in any given country, since this will have a big effect on mortality rate.

Ultimately, the best weapon in the fight to reduce R is a vaccine. But exactly when this will be available – or indeed if it will ever happen at all – is currently unclear.

Tags
coronavirusdiseaseepidemiologyhealthmedical researchpublic health
In this article
coronavirusdiseaseepidemiologyhealthmedical researchpublic health
Related
The bizarre history of exercise explained in 8 minutes
Harvard professor Daniel Lieberman debunks the ‘10,000 steps per day’ myth.
▸
8 min
—
with
Daniel Lieberman
Health
America’s maternal death rate: “This is a national crisis”
Black women are 3x more likely to die giving birth. Here’s one plan to fix that.
▸
7 min
—
with
Michael Dowling
Harvard professor debunks the biggest exercise myths
Exercise culture is crazy. But what you need to do is exceedingly simple.
▸
with
Daniel Lieberman
Health
Food expiration dates don’t have much science behind them
A food safety researcher explains another way to know what’s too old to eat.
The Present
Five key findings from the 2022 UN Population Prospects
Explore the key highlights from the UN’s latest release of its world population estimates.
Up Next
Hard Science
Study: Life might survive, and thrive, in a hydrogen world
When searching for extraterrestrial life, astronomers may want to look at planets with hydrogen-rich atmospheres.