We tend to think of the human-like people before us, like the Neanderthals, as part of our biological history that’s so far removed that it has little bearing on our current lives. After all, you don’t get to meet Neanderthals in the street. Or do you? For one, from 1.8% to 2.6% of the DNA in most modern people comes from the Neanderthals. A new study provides another important link – Neanderthals passed on a key genetic adaptation that kept us protected from killer viruses.

Sex between Neanderthals and homo sapiens is the reason for our genetic connection. The humans were on their way out of Africa into Eurasia, when they met the Neanderthals. Thanks to sharing a common ancestor about 500,000 to a million years prior, the sex between the species produced viable offspring.

What the new study found is that before they hooked up with modern humans, Neanderthals were in Eurasia for hundreds of thousands of years fighting off pathogens. As a result, their genomes developed an ability to survive viruses, which they gifted to us.

The study’s co-author David Enard, Ph.D. from the University of Arizona explained to Inverse that interbreeding was like a quick “antidote” for the homo sapiens to protect themselves. They suddenly faced an onslaught of new viruses.

Of course, not everything went smoothly when these two species met in the distant past. The scientists think they likely infected each other with the pathogens from their environments – in what’s called “the poison-antidote” model of exchanging genes. The sexual unions produced the antidote. 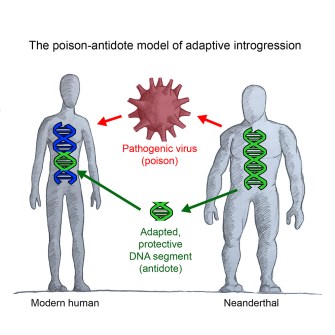 The research involved creating a list of over 4,500 genes of modern humans that are involved in defending against viruses and contrasting that with the database of sequenced Neanderthal genes. The scientists found 152 genes in modern humans that were also in the Neanderthal genome. The researchers believe that these genes we got from the Neanderthals are those that interact with RNA viruses of today like hepatitis C, HIV, and influenza A.

Notably, while these genes were instrumental in human survival over time, they are not really protecting us any longer from modern viruses. This points to the fact that evolution is “an arms race,” as Dr. Enard called it. It’s a process where even if we manage to overcome some of them, scores of new viruses constantly spring up to attack us. It was very sobering realization for Dr. Petrov and I that our work likely implies that humans had to adapt to hundreds, if not thousands of different harmful viruses over million years of evolution,” related Dr. Enard.

It also bears pointing out that modern humans get depression and cigarette addiction from the Neanderthals.

Enard co-authored the study with Dmitir Petrov, Ph.D. of Stanford University. You can check out their study published in Cell.

Nikolaas Tinbergen’s concept of “supernormal stimulus” explains why humans are attracted to a heightened version of reality.
Neuropsych

A new study looks at what happens when you get infected with two viruses at the same time.
Surprising Science

Pins and needles, anyone?
Up Next

Authentic Learning and Why You Can’t Choreograph Success

Motivation works in some complex ways. There are reward systems, giving a person something they really want after completing a task. There’s reinforcement, punishing bad behavior and buttressing good behavior. […]