The White House sent its 2021 budget request to Congress on Feb. 10, offering a glimpse into how the Trump administration wants to reprioritize federal spending among the science agencies.

The main priority: Cut research funding for almost all agencies, but boost spending on space travel and defense, as well as science and technology research that will fuel what the White House calls “industries of the future.” These include artificial intelligence (AI), quantum information science (QIS), 5G/advanced communications, biotechnology, and advanced manufacturing, according to the budget request report.

Here’s a quick overview of some of the requested research funding cuts (Congress still has final say on the budget), as compiled by Science Magazine:

But not all science agencies would suffer: The White House is calling for a 9-percent reduction in overall research spending, it’s also requesting a $25.2 billion budget increase (12-percent raise) for NASA, which would fund missions to the moon and Mars. 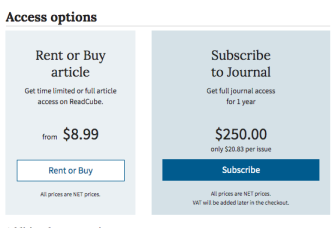 Accessing new research can be prohibitively expensive, both for individuals and organizations. For example, unless you use illegal paywall-busting tools like Sci-Hub, you can expect to pay anywhere from $8.99 to $30 for a single article, while some universities pay up to $10 million annually for a subscription that gives students access to a suite of academic journals. Where does all that revenue go?

Some of it goes to for-profit publishers, like Elsevier and Wiley. But other revenues help fund nonprofit groups like the Massachusetts Medical Society, American Medical Association and American Geophysical Union.

That’s why, in December, about 140 publishers and academic societies signed an open letter to the Trump administration expressing “deep concerns” that the proposed policy would “jeopardize the intellectual property of American organizations engaged in the creation of high-quality peer-reviewed journals and research articles and would potentially delay the publication of new research results.”

“Going below the current 12 month “embargo” would make it very difficult for most American publishers to invest in publishing these articles,” the letter reads. “As a consequence, it would place increased financial responsibility on the government through diverted federal research grant funds or additional monies to underwrite the important value added by publishing. In the coming years, this cost shift would place billions of dollars of new and additional burden on taxpayers. In the process, such a policy would undermine American jobs, exports, innovation, and intellectual property. It could also result in some scientific societies being forced to close their doors or to no longer be able to support the publication of U.S.-sponsored science that is key to ensuring that the U.S. remains the world leader in science and technology.”

I hope you look back on this letter in ten years and see how misplaced it was. Stop trying to fight gravity.

But days after that letter was published, a coalition of more than 200 academic and research libraries published a separate letter supporting the open-access proposal.

“Each year, the federal government uses taxpayer dollars to fund more than $60 billion dollars in scientific research,” the letter reads. “The government funds this research with the understanding that it will advance science, spur the economy, accelerate innovation, and improve the lives of its citizens. Yet, under current policy, most taxpayers – including academics, students, and patients – are not able to access the results of the research that their tax dollars fund for at least a year.”

A potential shift in community opinion

The letter goes on to argue that opening access to government-funded research would help researchers “incorporate new findings into their research more rapidly,” boost scientific productivity, and help the U.S. stay competitive with other nations, some of which have recently begun pushing for greater access to scientific research.

“In 2018, major national research funders across Europe introduced “Plan S” to make all scientific works freely available as soon as they are published,” the letter continues. “Support for such policies has continued to grow with countries including Japan, China, India, and Brazil indicating that they are considering similar policies, and private foundations (like the Bill & Melinda Gates Foundation) already fully deploying an immediate, open access policy.”

Do most researchers agree? According to a 2018 Ithaka S+R survey, 64 percent of U.S. college and university faculty members would “be happy to see the traditional subscription-based publication model replaced entirely by an open access system,” up from 57 percent in 2015.

Still, it remains unclear whether the Trump administration will sign such an executive order. If so, it’d build upon an Obama-era policy that forced all scientific agencies — not just the National Institutes of Health — to make all research available for free 12 months after publication.

Explore the key highlights from the UN’s latest release of its world population estimates.
Up Next
Neuropsych

They can be signs of how people feel in their relationship – and may send an important message to potential rivals.