Human beings don’t do well when they try to understand things past a certain scale. When you consider the 7.5 billion people on the planet, you don’t think of them in the same way as, say, the people who you meet walking your dog or your extended family. People can’t conceive of how small the Earth is in comparison with the Sun, and people can’t conceive of how broad and ubiquitous climate change really is — which is why some folks scoff at the idea when the Northeast US experiences record snowfall.

Most of us limit our understanding of climate change to the impact that CO2 has on our atmosphere and the resulting warming of the planet. But climate change is a multifaceted phenomenon. As we change our planet’s chemistry, all environments experience a subsequent change, not just through the air we breathe but also in the oceans. The oceans of the future won’t just be bigger from melting sea ice; they will become acidic seas where the jellyfish reign supreme.

In a way, this is helpful. If more CO2 was retained in the atmosphere, the faster the planet would heat up from the greenhouse gas effect. There’s no such thing as a free lunch, however. As CO2 mixes with the oceans’ H2O, the two molecules combine to form carbonic acid (H2CO3), lowering the oceans’ pH and increasing its acidity. Under normal circumstances, natural processes from the dissolved minerals deposited into the oceans by rivers help to keep the oceans’ pH levels in balance, but the rate at which oceans are absorbing our CO2 means this process has not been sufficient. 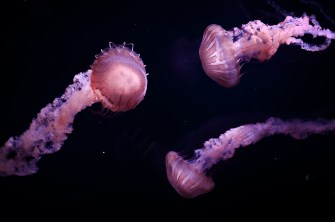 Nearly all forms of life are extremely sensitive to pH levels. You can imagine how difficult it would be for humanity if all of our air was slightly acidic — such is the case in the oceans. But, like any environmental change, there are losers and winners.

The most obvious loser in this new environment are species that build shells, like oysters, clams, and corals. Any disruption to a food chain puts an ecosystem in danger, but the increased difficulty that corals face when building their shells is particularly worrisome. Corals are a foundation species, meaning that they create and maintain a habitat for other species. Without them, an estimated 4,000 species will be at risk.

While many species of shell-building animals and fish are negatively impacted by ocean acidification, jellyfish don’t seem to struggle much at all. One of the ways scientists discovered this was by looking at places in the ocean where CO2 levels are naturally higher, such as nearby volcanic seeps in the Mediterranean. In these locations, jellyfish and other “nuisance” species like dangerous algae exist in much higher numbers than elsewhere. Additional research, too, has demonstrated that as pH levels drop in the ocean, jellyfish numbers rise.

It’s unclear how jellyfish will fare as the oceans become even more acidic in the future. So far, it seems they are resistant to acidification, but not immune to it. Some researchers believe that the selectivity of this damage — that ocean acidification seems to affect other species more — is what’s leading to the jellyfish’s rise. As their competitors and prey becomes less fit, jellyfish capitalize by ramping up their consumption.

As an example, one study looked at how well copepods and jellyfish fared in tanks of normal ocean water and tanks of acidified ocean water. Copepods are small, abundant crustaceans that are critical to ocean ecology, serving as a food source for nearly every species. When box jellyfish were added to the copepod tanks that contained normal ocean water, the jellyfish consumed 37% of the copepods. When added to the acidified tanks, jellyfish ate 83% of the copepods. However, it’s not clear whether this occurred because the copepods had been weakened by the acidification, whether the jellyfish became hungrier under the strain of acidification, or some combination of the two.

Jellyfish numbers appear to be on the rise, and it looks like ocean acidification is to blame. Unless we learn to curb our CO2 outputs, it may be that our future oceans may become more gelatinous than we’d like.

EV charging stations are the most widespread alternative to gas and diesel pumps. Each alternative has its own hotspots and “deserts.”
Up Next
Strange Maps

Here’s how to eat your way through LA

This culinary map of Los Angeles proves the city is more than just the world’s movie capital.