Set the Wayback Machine to 100 million years ago. Where do you want to go? Well, where you really don’t want to go is the Sahara. According to the lead author of a new study of Cretaceous rock formations in southeastern Morocco, the region was “arguably the most dangerous place in the history of planet Earth, a place where a human time-traveller would not last very long.” 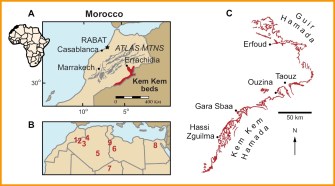 Geographical setting of the Kem Kem region and outcrops

The paleontologist/comparative anatomist quoted above is Nizar Ibrahim of the University of Portsmouth in the U.K. The rock formation he and his colleagues mapped has been known as the Kem Kem beds, and it reveals a very different Sahara than we know today. The study proposes rechristening the sites as the “Kem Kem group,” incorporating two distinct formations: the Gara Sbaa Formation and the Douira Formation.

100 million years ago, a massive river system ran through the area. It was home to some absolutely massive theropods, including the fearsome saber-toothed Carcharodontosaurus, which measured over 8 meters in length. The giant carnivore had huge, powerful jaws with long — up to eight inches — serrated teeth. There was also the fleet-footed Deltadromeus — which means “delta runner” — and various large-bodied pterosaurs screaming down from the skies to grab prey.

The prey was enormous, too. Fish that lived in the river system included lungfish and prehistoric coelacanths, some “four or even five times as large as today’s coelacanth,” according to co-author David Martill. Then there was the Onchopristis, a freshwater hark with deadly rostral teeth, “like barbed daggers, but beautifully shiny,” he says, as well as a nightmare full of large crocodyliforms.

The study sums it up: “No comparable modern terrestrial ecosystem exists with similar bias toward large-bodied carnivores.” 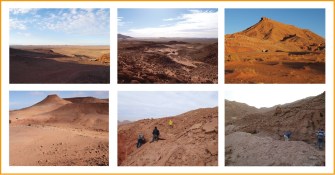 The Kem Kem group is comprised of exposed fossils on the face of a long-winding escapement near the Moroccan-Algerian border, at the northwestern edge of the Sahara Desert. The beds are fossil-rich and are more accessible (and the fossils themselves more exposed) than at other such sites in northern Africa. Similar fossils have been found by other researchers in the western desert of Egypt, as well as in the northern and central Sahara. The most recent calculation of the fossils’ age is that they hail from the late Albian-early Cenomanian.

One of the site’s most interesting characteristics, of course, and a source of some controversy, is that it contains both continental and marine species. Therapods are also represented to an unexpectedly large degree. Some have suggested the fossils come from two different, overlaid environments from two different periods. Others are troubled by the large number of incomplete specimens. The study, however, assumes the river-system view.

Collection of Kem Kem fossils has been going since at least the 1940’s, and many have found their way into collections around the world. As part of this study, Ibrahim visited these far-flung specimens across several contents. Some of the fossils are well-documented, and some have uncertain provenances, making the task of constructing a cohesive, accurate picture of the site a challenge. Still, says Martill, “This is the most comprehensive piece of work on fossil vertebrates from the Sahara in almost a century, since the famous German palaeontologist Ernst Freiherr Stromer von Reichenbach published his last major work in 1936.”

Pins and needles, anyone?
Life

These animals to grow scalpel-sharp and precisely shaped tools that are resistant to breaking.
Up Next
Starts With A Bang

No, The Universe Cannot Be Expanding Differently In Different Directions

It’s one way to interpret recent X-ray data, but it conflicts with much, much better data we already have.Earlier this month, a new study came out claiming something shocking: perhaps the […]