It’s probably worth it to stick with the piano lessons when you are young, as new research provides proof that music instruction can boost brain growth.

“Experiencing music at an early age can contribute to better brain development, optimizing the creation and establishment of neural networks, and stimulating the existing brain tracts,’ said the study’s lead author Dr. Pilar Dies-Suarez about her team’s conclusions.

Studies have already shown that learning music can be beneficial to children with brain development disorders like autism. Researchers from the Hospital Infantil de México Federico Gómez in Mexico City wanted to understand more specifically what changes happen in the brain due to musical instruction.

The research involved 23 healthy children between five and six years of age. The children did not have any previous musical schooling or history of brain disorders. They were also all right-handed.

An advanced MRI technique (DTI or “diffusion tensor imaging”) was used to scan their brains before and after music lessons, which took nine months.  DTI can identify microstructural changes in the brain’s white matter. 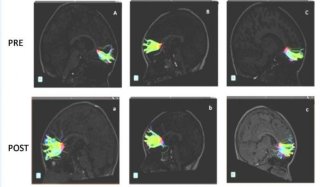 The reason the scientists focused on white matter is because it’s made up for millions of nerve fibers (axons) which connect different brain regions. Measuring how water molecules move through the axons by DTI scanning can show if the child has developmental issues.

Connections between different parts of the brain like motor and auditory areas should improve with age and growth of abilities. Reversely, studies have linked autism and ADHD to lowered amount of such connections.

The study revealed improvement in connections after the nine months of studying music.  Water molecules moved along the fibers better and the fibers themselves were longer, most significantly in the “minor forceps” – a part of the frontal cortex of the brain, which was associated with autism in prior studies.

“When a child receives musical instruction, their brains are asked to complete certain tasks.These tasks involve hearing, motor, cognition, emotion and social skills, which seem to activate these different brain areas.These results may have occurred because of the need to create more connections between the two hemispheres of the brain,” explained Dr. Dies-Suarez.

This new study adds to the growing research on the benefits of music training. A study earlier in 2016 by USC researchers showed that music instruction speeds up how the auditory pathway in the brain matures and makes it more efficient.

The study by Mexican researchers is being presented at the annual meeting of the Radiological Society of America.

The Industrial Revolution changed music forever, thanks to a combination of technological advances and clever entrepreneurs.
The Well

Darwin, Descartes, and Maxwell all believed in these science ‘demons.’
▸
7 min
—
with
Jimena Canales
The Future

Exercise culture is crazy. But what you need to do is exceedingly simple.
▸
with
Daniel Lieberman
Up Next
Culture & Religion