When they say parenting changes you, what follows is typically a refrain of ways the wee one will break you. Consider “mommy brain,” the folk psychology that having a baby decays a woman’s mind to flighty, forgetful, scatterbrained mush.

There is some truth to mommy brain—and the less discussed but no less lethargic daddy brain. It’s not the mushy mind part. That can be chalked up to sleep deprivation and a hectic schedule. Give mommy or daddy the day off and a solid 8 hours of sleep, and watch their mental acuity snap back to top shape.

The true part is that parenthood has been shown to alter our brains. It does this through neuroplasticity, the process by which the brain alters its physical structure through learning and environmental interaction, and neurogenesis, the forming of new neurons in certain brain regions.

A recent study published in Nature Scientific Reports suggests that these cerebral redesigns may have the ability to not only make us better parents but better partners as well.

How to parent like a comedian, Gaffigan style | Jeannie Gaffigan

Co-parenting is common in society and science experiments, but researchers led by Nanyang Technological University, Singapore, wanted to see how the physical presence of a co-parenting spouse affected brain responses.

To do this, they brought in “24 mother-father dyads” (read: couples). First, they asked the couples to complete a questionnaire on how often the mother or father took the lead in parenting. They then asked them to listen to infant and adult vocalizations under two conditions, separately in different rooms and together in the same room.

These scans revealed the couples to be synchronous, meaning their brain activity was similar and in the same areas of the brain. This synchronicity was only found in the together condition and was greater among parents who were younger, had only one child, and share parenting responsibilities more often.

As a control, the researchers also performed the experiment with randomly matched couples. They showed no synchronous effect in either condition; only true couples mirrored each other’s minds.

These results suggest two affects of co-parenting. First, partners who parent together grow attune to each other’s emotional state—so much so that the couples’ brains may be pliantly changing to match. Though, the study notes, such a conclusion is beyond the scope of its methodology. Further research would be necessary.

“Our study indicates that when spouses are physically together, there is greater synchrony in their attentional and cognitive control mechanisms when parenting,” Gianluca Esposito, the paper’s senior author and an associate professor at Nanyang, told Yahoo News.

However, that finding also points to the obverse. That is, parents who spend little time co-parenting together—whether because of work, separation, or one parent taking on the responsibility wholly—will be less likely to coordinate empathy. As Esposito explains:

Since the brain response of parents may be shaped by the presence of the spouse, then it is likely that spouses who do not spend much time together while attending their children may find it harder to understand each other’s viewpoint and have reduced ability to coordinate co-parenting responsibilities. This may undermine the quality of parental care in the long run.

So, it may not take a village, but it’s certainly nice to have someone around who understands your feelings like its second nature. 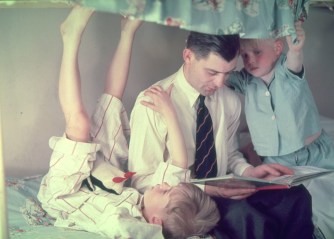 While this study looked at couples’ brains, many others have focused on how individual parent brains are shaped in response to their little bundles of responsibility.

“We found growth in brain areas … which may be responsible for interacting with your child, finding your baby to be special, planning and monitoring your parenting behavior, and engaging in warm parenting behavior,” Pilyoung Kim, the study’s lead author, told WebMD.

And fathers share in the changes, too. A study in the Proceedings of the National Academy of Sciences found that father’s minds turned on the “parenting network,” mirroring the same neural activation as mothers, an effect that was particularly strong in two-father couples.

So, it’s certainly true that parenting changes you. But when it comes to our brains, those changes appear to be for the better.

Ask Ethan: Can We Extract Energy From Gravitational Waves?

Is that required for detectors like LIGO and Virgo to work?Whenever any two things in the Universe interact at the same location in spacetime, one thing always remains true about that […]