Imagine your neighbor accuses you of stealing something. You didn’t. But your neighbor doesn’t believe you. He continues to accuse you. As he does, other neighbors come over and start watching the confrontation unfold.

How would you react to being falsely accused? Maybe you’d be angry. But even though your anger would be justifiable, it would also likely increase the odds that your neighbors would think you’re guilty.

That’s the key takeaway of new research published in Psychological Science called “Anger Damns the Innocent.” The findings are paradoxical: Being angry tends to make the accused come off as guilty, but their anger is usually a sign that they’re innocent.

Why is that the case? The study noted that we look to others’ emotions to understand social situations. That’s particularly true when deciding whether we should trust someone.

For example, past research shows that people use trustworthiness to make judgments about whether someone is guilty. What’s more, studies have also found that anger can make people seem less trustworthy. With these two findings in mind, the researchers proposed:

“…that when perceivers are alerted to a suspect’s anger, perceivers are apt to find the suspect untrustworthy, prompting a judgment of guilt. Perceivers may even interpret a suspect’s displayed anger as an inauthentic attempt to look innocent by faking moral indignation. This would further explain why perceivers deem an angry suspect guilty via perceptions of (in)authenticity.”

Across six studies, the researchers explored how laypeople and experts make guilt judgments when the accused person is angry. In one set of studies, participants watched clips of people accused of minor crimes pleading their case on a courtroom TV show called Judge Faith. The results showed that participants were more likely to rate angry defendants as guilty.

In another study, participants read about a fictitious person named Andrew Smith who was accused of committing an armed robbery. The study included four versions of Smith’s reaction to the accusations during his hypothetical testimony: angry, calm, silent, and irritated. For the silent condition, the participants read that Smith had invoked the Fifth Amendment. The other conditions included excerpts like:

The participants rated Smith most guilty when he was silent. Beyond that, being angry made Smith come off as most guilty, while being irritated made him seem guiltier than being calm. 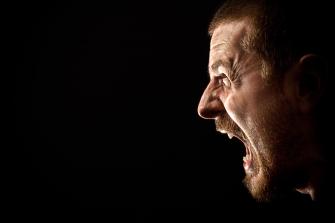 In a similar experiment, participants read one of two fictitious scenarios involving a man named Nathan. In both, he had been reasonably accused, but not necessarily guilty, of either cheating on his girlfriend or stealing money from his employer.

The participants were randomized to read either an angry or calm reaction. The angry condition was: “Nathan raises his voice and angrily denies responsibility, yelling, ‘I am so pissed off that you think I would do this!'” The calm: “Nathan calmly denies responsibility, stating, ‘I really can’t believe you think I would do this.'” Again, the participants rated the angry response as guiltier.

Is it just laypeople who view anger as a sign of guilt? To test that idea, the researchers conducted a study similar to the previous one, but its participants were professionals who regularly have to make consequential judgments of others’ guilt, such as fraud investigators and auditors.

They too rated the angry response as guiltier. Interestingly, the experts also considered remaining silent to be an indicator of guilt.

The falsely accused are angrier

When someone reacts angrily to an accusation, others generally see that person as guilty. But is anger really a sign of guilt?

To test that question, the researchers asked another set of participants to complete one of two tasks, both of which involved editing text. One task was simple, the other difficult. All participants were told they would be paid to complete the task.

After the participants finished the task, the researchers accused them of doing it incorrectly, and therefore they wouldn’t receive a bonus payment. This represented a false accusation for the participants who completed the simple task, most of whom had done it correctly. Meanwhile, the participants assigned to the difficult task generally made errors, so the accusations were mostly accurate.

Afterward, the researchers asked both groups how angry they felt. The results showed that those who were falsely accused reported significantly higher feelings of anger than those who were rightfully accused.

The researchers said their findings add important insights to the field of deceit detection, showing that anger is not a sign of guilt but of innocence.

“This is particularly important because most research on emotional cues of deception finds little to no association between other discrete emotions and guilt,” the researchers wrote. “While scholarship on the psychology of anger posits that the social information it portrays is that there is someone else to blame, we find that anger in this context (mis)portrays the opposite to others: guilt.”

The study concludes: “There are many reasons to be angry when accused of wrongdoing, but perhaps none as strong as the belief that one has been falsely accused.”

Our inaugural special issue is focused on progress — the search for, the study of, and the project towards a better world.
Up Next
The Past

Mastodons, rhinos, and even camels — all in the great state of California.