Most people eat meat, but few meat-eaters have a clear understanding of the industry that provides their food. If they did, they would eat better-produced meat, less meat, or no meat at all.

But meat-eaters – like vegetarians – are understandably emotional and defensive about their eating habits. The rituals of such an intimate part of daily life are unlikely to be swayed by cold, hard facts alone.

Perhaps maps can do what those facts alone cannot. Cartography, an older language than writing, bypasses the inner critic who allows agreeable facts to add to our bias and labels disagreeable ones as ‘fake news’.

The maps shown below are a selection from the Meat Atlas, a study produced by Friends of the Earth Europe and the Heinrich Böll Stiftung, a foundation allied to the German Green Party.

The Atlas is not anti-meat. It merely aims to illuminate a global industry that is remarkably obscure, considering the major impact it has on our daily lives, and on the planet as a whole. Alternatives to the agro-industrial complex are mentioned. Yes, vegetarianism is one of them. But so is responsible, organic farming.

Along the way, the study is packed with amazing stats. Such as the fact that livestock produce nearly one-third of the world’s greenhouse gases. Or that in 2012, India overtook Brazil as the world’s biggest exporter of beef – if you count buffalo as beef. If you do, about a quarter of the beef on the world market is now in fact buffalo meat from India, which is a dollar a kilo cheaper to produce than beef.

But we promised you maps. Here is a selection to make you reconsider the next slice of convenience meat : 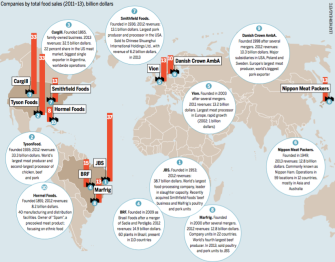 Vion? Hormel? Tyson Foods? This world map shows the world’s ten biggest meat-produdcing companies. None are household names. Take JBS, the world’s biggest producer of beef and of chicken. JBS has the capacity to slaughter 85,000 head of cattle, 70,000 pigs, and 12 million birds per day. With food sales of $38.7 billion in 2012, it had more revenue than more client-facing food manufacturers such as Unilever or Danone. 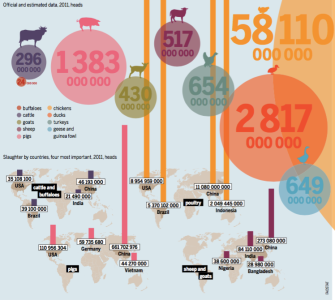 In 2011, an estimated 58.1 billion chickens were slaughtered around the world – more than any other animal. Ducks were a distant second, at 2.8 billion, followed by pigs (almost 1.4 billion), turkeys (654 million) and geese (649 million). Next were sheep (517 million), goats (430 million) and cattle (296 million), trailed at a long distance by buffaloes (24 million). China is the world’s biggest producer and consumer of meat. It leads the world in the number of animals slaughtered for the four leading categories.

Around 1.3 billion people live from animal husbandry, most in developing countries. In the developed world, meat is produced by an ever smaller group of farmers, in ever larger factory farms. In the U.S. for example, the number of pig farmers in the U.S. fell by 70% from 1992 to 2009, while the number of pigs sold per farm per year rose from 945 to 8,400. The meat industry is heavily subsidised. In Russia and neighbouring countries, up to 24.3% of farm turnover for livestock consists of government subsidy. In Europe, it is 12.5%, but even in North America it is almost 5%. 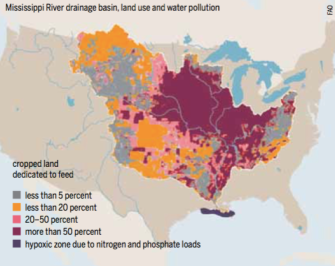 Intensive livestock production releases nitrogen compounds into the atmosphere, which contributes to climate change. In groundwater, nitrogen can cause cancer. In coastal waters, it leads to oxygen-starved dead zones, as has happened to an area about 20,000 sq. km large around the mouth of the Mississippi. Here, a litre of seawater holds less than 2 milligrams of dissolved oxygen. The norm is about 7 milligrams. No fish or shrimp can survive in this nitrogen desert, the result of the over-fertilisation of the Mississippi basin. Worldwide, there are about 250,000 sq. km of these coastal dead zones.

America, Home of the Chicken 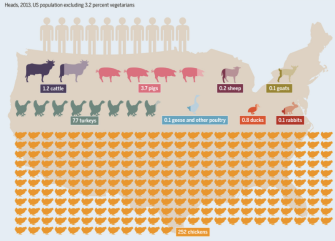 How much meat do you eat? Excluding vegetarians, this is how many animals are slaughtered to satisfy the food requirements of ten Americans. Why ten Americans instead of one? Because one American would consume just 0.01 rabbit per year, and that seems unfair on the other 99% of that rabbit, even if it is a merely statistical one. Pity the chickens, though: I bet you never realised how many of those you (and nine other Americans) got through in a year.

Stagnating Demand in the Developed World…. 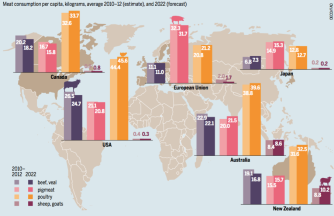 We’ve reached peak meat in North America, Europe and other parts of the developed world. Industry scandals and concerns about animal welfare and the environment are pushing consumers towards alternatives to mass-produced food. As this map shows, the consumption of beef and veal, sheep and goats, and pig is projected to be lower in 2022 than ten years earlier in the U.S., Canada and the EU. Poultry consumption will be up slightly, but not enough to compensate the fall in consumption for the other categories. The projected figures for Japan, Australia and New Zealand are also grossly stagnant. 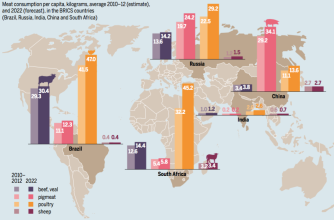 The fast-developing economies of Brazil, Russia, India, China and South Africa – the BRICS for short – together account for 40% of the world’s population. As they get richer, their people add more meat to their diet. Between 2003 and 2012, their meat consumption rose by 6.3% a year. It is expected to rise by another 2.5% a year between 2013 and 2022. That pattern is likely to be repeated in other countries as incomes rise and the urban middle classes grow.

The UN’s Food and Agricultural Organisation assumes that by 2050, emerging markets will cover 29% of their caloric intake with animal products (meat, eggs and dairy). To keep up with that demand, meat output needs to rise from 300 million tonnes now to 470 million tonnes by 2050. Feed grain production will have to double, from 260 to 515 million tonnes a year worldwide – and that will require either dramatically higher yields per hectare or more land used for agriculture, or both. 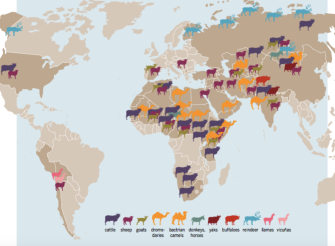 Over 40% of the world’s land surface is unsuitable for crops, giving pastoralists the opportunity to use these areas for raising their herds. As landscapes differ widely, so do the animals suited to the varying climates. As this map shows, they vary from reindeer in the arctic over camels and dromedaries across the deserts of Central Asia and Northern Africa to the llamas and vicunas of the Andes.

The high degree of adaptation means this type of farming can be both very sustainable and highly productive. However, it is declining together with the migratory lifestyle that it requires. Estimates for the number of pastoralists worldwide vary from 120 to 200 million, with smallholder farmers – most of them with at least some livestock – estimated up to 600 million globally.

Finally, a Map of Vegetarianism 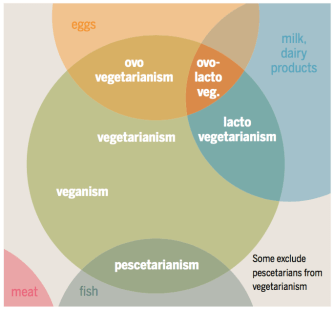 If you can’t tell a vegan from a vegetarian or if you think a pescetarian is someone who affects a belief in the Flying Spaghetti Monster, this map is for you. People become vegetarians for a variety of reasons: religious, ethical, medical, ecological or sentimental, and sometimes a combination of any of these.

About 2% of Americans describe themselves as vegetarian. In India that figure is just over 30%, because of certain religious tradition in Buddhism and Hinduism. As a result, average meat consumption per person in India is one-tenth of that in China. Other religions partially forego meat. Jews and Muslims abstain from pork, a religious interdiction probably due to the risk of trichinosis, a disease caused by parasitic worms in infected pigs. Christians of various stripe observe periods of abstinence from some or all types of meat. 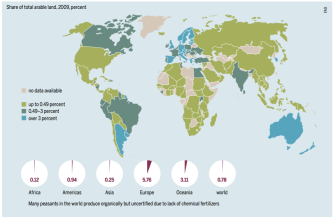 Good-quality meat, ethically produced: it can be got. At a price of $250,000 for the first lab-grown hamburger, it will be a while before artificial meat is within the reach of the ordinary consumer.

A more immediately viable solution, which is also better for the environment long-term, is organic farming. If less than 2% of meat sold in the industrialised world is organically produced, it is at least partly about price: it costs nearly twice as much to produce as conventional meat. But only if we ignore the cost of conventional meat production to animal welfare, human health, and the environment – and in government subsidies to the agricultural industry.

Going organic requires commitment from the consumer: they must be willing to pay more, and must make the effort to find organic meat in the first place: disputable sourcing and labelling and limited availability are some of the biggest obstacles.

And yet, over 5% of arable land in Europe is already being used for certified organic agriculture. The other continents are lagging far behind, though, with only Oceania exceeding 1%.

Nevertheless, even in the U.S., the system of community-supported agriculture is booming. This is when buyers pay in advance for all seasonally-available produce from a farm, be it meat, dairy, vegetables, etc. This secures an income for the farmers, who can then concentrate on responsible, organic production.

Care for some cricket, ma’am?

Flexitarianism needn’t be synonymous with weak-willed vegetarianism. An active choice for less meat could improve animal welfare, human health and the biodiversity of the planet. One of the many ways to achieve this is to consume protein made from insects, as suggested by a recent UN report. A comparable volume of insects emits 80% less methane than cattle and contains twice as much protein as chicken or steak. And there is plenty of choice. As shown by this map, the Mexicans and Chinese have the choice between more than 300 edible species of insects. Japan, DR Congo, India and Thailand are also insect-rich, but even in the U.S. and Europe, there are more than 100 species to choose between.

Many thanks to Orion Jones for pointing out the Meat Atlas, found here. 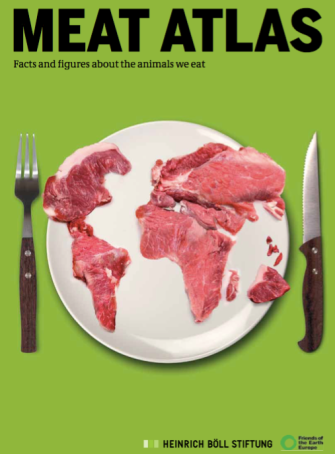 Pay your bills, slip through security, and take a train, all without fumbling through your wallet.