In the slightly macabre experiment to find out where tattoo ink travels to in the body, French and German researchers recently used synchrotron X-ray fluorescence in four “inked” human cadavers — as well as one without. The results of their 2017 study? Some of the tattoo ink apparently settled in lymph nodes. 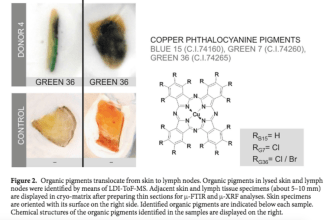 Image from the study.

As the authors explain in the study — they hail from Ludwig Maximilian University of Munich, the European Synchrotron Radiation Facility, and the German Federal Institute for Risk Assessment — it would have been unethical to test this on live animals since those creatures would not be able to give permission to be tattooed.

Because of the prevalence of tattoos these days, the researchers wanted to find out if the ink could be harmful in some way. 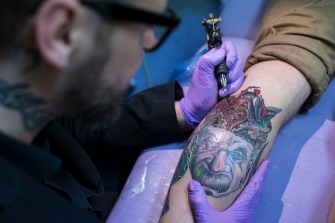 “The increasing prevalence of tattoos provoked safety concerns with respect to particle distribution and effects inside the human body,” they write.

It works like this: Since lymph nodes filter lymph, which is the fluid that carries white blood cells throughout the body in an effort to fight infections that are encountered, that is where some of the ink particles collect. 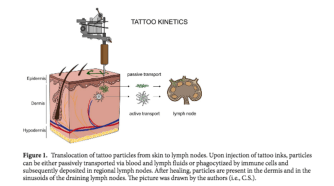 Image by authors of the study.

Titanium dioxide appears to be the thing that travels. It’s a white tattoo ink pigment that’s mixed with other colors all the time to control shades.

The study’s authors will keep working on this in the meantime.

“In future experiments we will also look into the pigment and heavy metal burden of other, more distant internal organs and tissues in order to track any possible bio-distribution of tattoo ink ingredients throughout the body. The outcome of these investigations not only will be helpful in the assessment of the health risks associated with tattooing but also in the judgment of other exposures such as, e.g., the entrance of TiO2 nanoparticles present in cosmetics at the site of damaged skin.”

Sports teams have yet to pour a celebratory cooler of chocolate milk over their coach after winning the big game.