CIMON is the droid predecessor to R2-D2 from “Star Wars” or HAL 9000 out of “2001: Space Odyssey”. But it’s not science fiction – CIMON is an AI, dubbed“the flying brain,” that’s been just launched into space aboard Space X’s “Dragon” cargo ship. It will assist the German astronaut Alexander Gerst in carrying out a number of scientific tasks aboard the International Space Station.

CIMON, which stands for “Crew Interactive Mobile Companion,” is the first robot of its kind. Designed by Airbus and IBM, it weighs 11 pounds and is about the size of a basketball. Still, it packs the neural network strength of IBM’s Watson supercomputer in its “brain”, reports Techcrunch.

Speaking as a cartoon face on the monitor, CIMON has been trained to recognize the voice and face of the astronaut Gerst, who is also a geophysicist with the European Space Agency. Gerst will be able to call CIMON, prompting the droid to utilize its more than a dozen propellers to follow the voice and float over to it. The camera in CIMON will hover at about the eye-level, detecting the person it’s looking for. The bot’s programming can even interpret emotional states and will react appropriately. Its emotional intelligence is supposed to help monitor the psychological states of the crew. 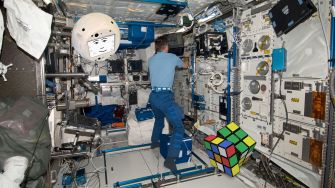 CIMON will be helping solve a Rubik’s cube. Credit: Airbus

Bret Greenstein, global vice president of Watson Internet of Things Offerings at IBM, explained that CIMON will be able to listen to the astronaut.

“This is designed to work in English,” said Greenstein.“It understands Alexander. It will come to him when he speaks.”

CIMON will also be able to interact with other crew members who can give it voice commands but it will work best with Gerst. The goal is for CIMON to become a true crew member on the station.

During the mission, CIMON should be guiding Gerst through a crystal-growth experiment and helping him look at a Rubik’s cube through its camera while giving him instructions on how to solve it.

The droid can also detect dangerous situations or technical problems to warn the astronauts. Another one of its tasks is assisting Gerst during a complex medical experiment.

In an IBM blog post, Matthias Biniok, the lead Watson architect in Germany, elaborated on why what CIMON can do is helpful:

“Experiments sometimes consist of more than 100 different steps,” he said. “CIMON knows them all.”

From a technological standpoint, CIMON features an infrared camera on its front, a microphone on the back, two batteries and an “offline” button.

Check out this explanation of CIMON’s capabilities:

And if you can’t get enough, here’s more about how CIMON works –

Meaningful pictures are assembled from meaningless noise.
Up Next
Starts With A Bang

An artist’s conception of what the Universe might look like as it forms stars for the first time. As they shine and merge, radiation will be emitted, both electromagnetic and […]