There is a story about Thales, the first philosopher, getting rich merely to prove that philosophers had business sense. The people of Miletus thought that philosophy was useless and asked him how he was still poor if he was so smart. He made a bet with them, saying he would be rich inside of a year. He proceeded to invent futures contracts and made a fortune in olive oil production.

Today, the stereotype of the philosopher who is wise but utterly useless in practical affairs endures. While some philosophers were rich, either by inheritance, lucky breaks, or rigging the lottery like Voltaire, the best-known philosophers were broke. What could a philosopher have to offer a modern business?

As it turns out, they have a lot to offer.

Google has its in-house philosopher Luciano Floridi and previously had Damon Horowitz in the same role. These philosophers ask the big questions that relate to the business operations of the company. “Should our search engine factor truth into the results?” is one such question. “How do we decide what that truth is?” is another. The resident philosopher also helps with more directly business-oriented questions of how to handle new regulations.

In Norway, social democratic and moralizing as it is, a philosopher helps to manage the Government Pension Fund. The Norwegian government had been debating how to properly invest the profits from the national oil company in a way that both assured financial security and moral responsibility for some time. They decided that the best way to guarantee both was to have a philosopher on hand to help with the ethical questions that would undoubtedly arise when businessmen tried to maximize profit.

While not every moral issue could be solved, the fund divested from arms manufacturers the army still had to make purchases from; the presence of a philosopher helped guide the process in a way that a room full of businesspeople alone could not have. The philosopher in question, Dr. Henrik Syse, continues to work in academia and remains a very public intellectual. 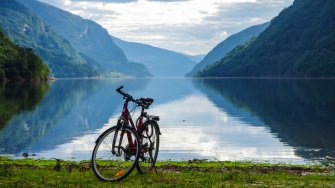 Scandinavia: home of lutefisk, perfect biking trails, and philosophers managing your pension fund. It might be utopia—or not.
The idea of philosophy consultants isn’t limited to the strange lands of Silicon Valley or Scandinavia. Consulting firms which offer philosophic services for businesses can be found in many places. Organizations like the American Philosophical Practitioners Association offer to help companies ask the big questions and make choices that promote more than just short-term profit. Some of the more prominent names in business ethics have worked for the World Economic Forum and have helped to guide discussion on issues that shape the global economy.

But, why should businesses do this at all?

A boardroom filled with nothing but businesspeople might have a hard time trying to solve an ethical problem without unduly erring towards their profit. A philosopher in the room would at least give voice to ethical issues and concerns other than the maximization of income.

Similarly, groupthink, the phenomenon of otherwise rational groups making horrible decisions because nobody will stick their neck out, is a real and historically problematic thing which can be avoided by having a person trained in asking tough questions in the room.

It’s good business to have a philosopher on hand.

A meta-analysis of studies shows that there is a positive correlation between how a business approaches social and environmental issues, commonly under the banner of corporate social responsibility, and profit. The presence of a person who knows how to ask the right questions and worry about something other than profit is a vital part of being able to take advantage of that correlation.

In our modern age, where the rapid pace of technological advances can outpace our regulations, a resident philosopher can help a business address issues of privacy, artificial intelligence, data collection, and how those things relate to their values in lieu of official guidelines. Failures on these fronts are well known, and a little guidance on these issues might have helped.

So, will there soon be a slew of in-house philosophers at fortune 500 companies? Perhaps not right away, but the benefits of having a philosophic check-up every now and again are becoming more evident. The age of the philosopher CEO might be far off, but it doesn’t sound as absurd as it might have before.

While it might seem obvious, some business leaders need the reminder that their employees are people with spirits and energy that need to be nurtured. However, according to Duke University […]