Who hasn’t wondered what it would be like to live in the era of the dinosaurs? It certainly would be an amazing sight — but also utterly terrifying, once the reality set in that you were rather close to the bottom of the food chain, a tasty morsel for tyrannosaurs and pterosaurs alike.

Now we know, thanks to University of Queensland researchers, that the Cretaceous was even scarier than we thought: they have announced the discovery of perhaps the most fearsome pterosaur of all, Thapunngaka shawi. The study is published in the Journal of Vertebrate Paleontology.

“This thing would have been quite savage,” says Tim Richards of the university’s Dinosaur Lab, one of the authors of the study announcing your new nightmare. “It would have cast a great shadow over some quivering little dinosaur that wouldn’t have heard it until it was too late.” 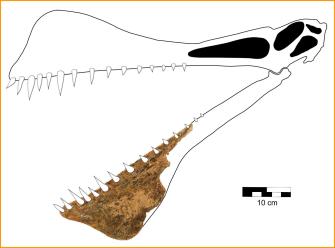 Reconstruction of the skull of Thapunngaka shawiCredit: Tim Richards / University of Queensland

The find is remarkable. Pterosaurs had light, relatively hollow, thin-walled bones that did not lend themselves to fossilization. “It’s quite amazing fossils of these animals exist at all,” says Richards, who also notes that, “By world standards, the Australian pterosaur record is poor, but the discovery of Thapunngaka contributes greatly to our understanding of Australian pterosaur diversity.”

Local fossil collector Len Shaw came across the fossil in a quarry northwest of Richmond, Australia back in 2011. It is not an entire pterosaur specimen but rather just a rostral portion of a crested mandible from which the scientists were eventually able to extrapolate more of the creature’s features. Geologically speaking, it was found in the Toolebuc Formation.

The pterosaur’s genus name is dedicated to the now-extinct Wanamara indigenous people who lived in the area. (The species name belongs to its discoverer.) Senior author Steve Salisbury parses out the moniker: “The genus name, Thapunngaka, incorporates thapun [ta-boon] and ngaka [nga-ga], the Wanamara words for ‘spear’ and ‘mouth’, respectively.”

In other words, the pterosaur’s name means “Shaw’s spear mouth.” 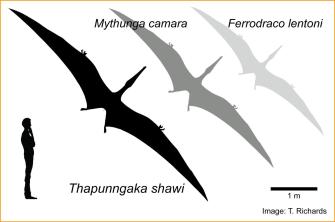 Pterosaurs should not be mistaken for ancient birds. “Even though pterosaurs could fly, they were nothing like a bird, or even a bat — Pterosaurs were a successful and diverse group of reptiles — the very first back-boned animals to take a stab at powered flight.”

Thapunngaka shawi was an anhanguerian, a type of pterosaur that dominated all of Earth’s continents in the latter days of the dinosaurs. T. shawi, says Richards, “would have been a fearsome beast, with a spear-like mouth and a wingspan around seven meters. It was essentially just a skull with a long neck, bolted on a pair of long wings.”

Also teeth. Lots of teeth. The one-meter-long head sported about 40 of them. Researchers figure that they were well-suited to plucking fish from Queensland’s long-ago Eromanga Sea.

Salisbury notes that Thapunngaka shawi had a bony crest on its lower jaw that is larger than that of any other anhanguerian found so far. It may have had one on top as well. “These crests probably played a role in the flight dynamics of these creatures,” says Salisbury, “and hopefully future research will deliver more definitive answers.”

Since our arrival, humans have driven a seven-fold drop in the mass of wild land mammals.
The Past

Was our distant ancestor a biped or not – i.e., human or not human?
Health

Sex can be a death trap even for modern toad and frog species.
Up Next
The Present

The Seychelles magpie-robin is up for sale – yes, for sale – as a digital nature collectible.