June 6 marks the 75th anniversary of D-Day, the battle that changed the course of World War II and took the lives of an estimated 12,000 Allied soldiers. On Wednesday, President Donald Trump gathered with other world leaders at a British naval base in Portsmouth, England, to observe a commemoration event that honored fallen soldiers and surviving D-Day veterans.

At the event, Trump recited part of a prayer delivered by President Franklin D. Roosevelt in the hours after the invasion at Normandy:

Almighty God: Our sons, pride of our Nation, this day have set upon a mighty endeavour, a struggle to preserve our Republic, our religion, and our civilization, and to set free a suffering humanity.

They will need Thy blessings. For the enemy is strong. He may hurl back our forces but we shall return again and again; and we know that by Thy grace, and by the righteousness of our cause, our sons will triumph.

Some will never return. Embrace these, Father, and receive them, Thy heroic servants, into Thy kingdom.

Thy will be done, Almighty God. Amen.

Below are letters and stories written by soldiers who saw the events of D-Day firsthand.

Sgt. Ray Lambert, a medic with the 1st Infantry Division, was among the first U.S. soldiers to hit the beach on D-Day.

When we got within a thousand yards of the beach, you could hear the machine-gun bullets hitting off the front ramp of the boat,” Lambert said at a 60th anniversary ceremony for D-Day.

“The ramp went down, and we were in water over our heads. Some of the men drowned. Some got hit by the bullets. The boat next to ours blew up. Some of those men caught fire. We never saw them again,” he said. “When we got to the beach, I said to one of my men, Cpl. Meyers, ‘If there’s a hell, this has got to be it.’ And it was about a minute later that he got a bullet in his head…To make a long story short, only seven of the 31 men on my boat made it to the beach.”

Below is an excerpt from a newspaper article written by Ernie Pyle, a journalist and soldier from Indiana who landed on the beach at Normandy the day after D-Day.

Now that it is over it seems to me a pure miracle that we ever took the beach at all. For some of our units it was easy, but in this special sector where I am now our troops faced such odds that our getting ashore was like my whipping Joe Louis down to a pulp….

Ashore, facing us, were more enemy troops than we had in our assault waves. The advantages were all theirs, the disadvantages all ours. The Germans were dug into positions that they had been working on for months, although these were not yet all complete. A one-hundred-foot bluff a couple of hundred yards back from the beach had great concrete gun emplacements built right into the hilltop. These opened to the sides instead of to the front, thus making it very hard for naval fire from the sea to reach them. They could shoot parallel with the beach and cover every foot of it for miles with artillery fire.

Then they had hidden machine-gun nests on the forward slopes, with crossfire taking in every inch of the beach. These nests were connected by networks of trenches, so that the German gunners could move about without exposing themselves.

Throughout the length of the beach, running zigzag a couple of hundred yards back from the shoreline, was an immense V-shaped ditch fifteen feet deep. Nothing could cross it, not even men on foot, until fills had been made. And in other places at the far end of the beach, where the ground is flatter, they had great concrete walls. These were blasted by our naval gunfire or by explosives set by hand after we got ashore.

Our only exits from the beach were several swales or valleys, each about one hundred yards wide. The Germans made the most of these funnel-like traps, sowing them with buried mines. They contained, also, barbed-wire entanglements with mines attached, hidden ditches, and machine guns firing from the slopes.

This is what was on the shore. But our men had to go through a maze nearly as deadly as this before they even got ashore. Underwater obstacles were terrific. The Germans had whole fields of evil devices under the water to catch our boats. Even now, several days after the landing, we have cleared only channels through them and cannot yet approach the whole length of the beach with our ships. Even now some ship or boat hits one of these mines every day and is knocked out of commission.

The Germans had masses of those great six-pronged spiders, made of railroad iron and standing shoulder-high, just beneath the surface of the water for our landing craft to run into. They also had huge logs buried in the sand, pointing upward and outward, their tops just below the water. Attached to these logs were mines.

In addition to these obstacles they had floating mines offshore, land mines buried in the sand of the beach, and more mines in checkerboard rows in the tall grass beyond the sand. And the enemy had four men on shore for every three men we had approaching the shore.

And yet we got on. 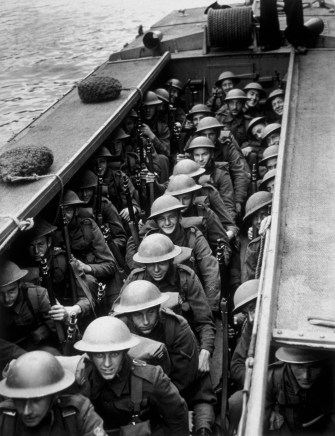 Now that I am actually here I see that the chances of my returning to all of you are quite slim, therefore I want to write this letter now while I am yet able.

I want you to know how much I love each of you. You mean everything to me and it is the realisation of your love that gives me the courage to continue. Mom and Pop – we have caused you innumerable hardships and sacrifices – sacrifices which you both made readily and gladly that we might get more from life.

I have always determined to show my appreciation to you by enabling you both to have more of the pleasures of life – but this war has prevented my doing so for the past three years. If you receive this letter I shall be unable to fulfil my desires, for I have requested that this letter be forwarded only in the event I do not return.

You have had many times more your share of illness and deaths in the family – still you have continued to exemplify what true parents should. I am sorry to add to your grief – but at all times realise that my thoughts are of you constantly and that I feel that in some small way I am helping to bring this wasteful war to a conclusion.

We of the United States have something to fight for – never more fully have I realised that. There just is no other country with comparable wealth, advancement or standard of living. The USA is worth a sacrifice!

Remember always that I love you each most fervently and I am proud of you. Consider, Mary, my wife, as having taken my place in the family circle and watch over each other.

Love to my family

(Lundberg was reportedly killed in action several weeks after D-day at age 25.)

Below is a letter from Captain Alastair Bannerman, whose diary entries are featured in the recent ITV documentary If I Don’t Come Home – Letters from D-Day.

It is now 03.00 hours in the morning and I have just been up to the bridge. It is rather light because the moon is shining, though heavy clouds cover her. One can see the row of small ships and of darker balloons silhouetted in front and behind us against the grey sea.

We are still rolling a little but the wind has subsided somewhat, thank Heaven. The captain and his first officer are on the bridge. They make sure where we are and look for the coloured lights which should guide us through one of our own minefields.

You, my angel, sleep gently in the nursery, I hope. Your thoughts have helped me so much. They have given me real strength. I can imagine how you listen to the news at 9 o’clock and think of me with love. I hope that Andrew’s golden head rests gently and quietly upon his small pillow and that Richard is nice and comfortable lying in his narrow little carry-cot…

With me sleep three officers: James, Raf and a special navy officer who is really only a travelling observer. How childlike and natural we all look when we are asleep. I slept almost from 10–2 o’clock and must now go back to the bridge if I am not going to fall asleep again in this stifling and sticky atmosphere… James relieves me at 4 o’clock and then I have a few hours to myself before dawn breaks. I have wakened James.

A long line of flares hangs over Cherbourg, or I suppose it is Cherbourg, and a few anti-aircraft tracer shots go up in the air above the immediate front line. Funny to imagine that there Germans run around their guns. I would like to know what they are thinking. The whole Channel between us and Cherbourg is filled with little ships which all quietly and efficiently sail towards France. The British, Canadian and American fighting forces on the war-path…

I heard that our C.O. has also landed, therefore our infantry must be there by now. God bless them and good luck to them. I do not believe that I can now write for very long. We can now see the French coast and very soon we will have to play our part. I must go now and look for the landing markings with my binoculars to ascertain our landing points. So, my darling, on we go! I know that you are with me. Come on the Bannermans! Let us be gay. Au revoir, God bless, I love you!

Below is a draft of a letter General Eisenhower wrote to be published in the event the invasion at Normandy was a failure.

Our landings in the Cherbourg-Havre area have failed to gain a satisfactory foothold and I have withdrawn the troops. My decision to attack at this time and place was based upon the best information available. The troops, the air and the Navy did all that Bravery and devotion to duty could do. If any blame or fault attaches to the attempt it is mine alone.

Soviet researchers studied crime through a Marxist-Leninist lens. Under Lenin, a humanitarian approach to criminality briefly emerged, but dissipated when Stalin rose to power.
The Past

Technology designed to listen for atomic bombs can also hear tornadoes.
Up Next
The Present

Google, Facebook, and others are doubling down on crypto

With the interest of these tech giants, it looks like cryptocurrencies are here to stay.