This article first appeared in the Newton blog on RealClearScience. You can read the original here.

It’s difficult to find good science news on TV. Whenever the major cable news outlets mention science, it’s usually in some twisted political context: Fox News denies climate change; MSNBCfearmongers about fracking; and CNN asks if asteroids are caused by global warming. (Hint: They are not.) Even something has gone terribly wrong at our beloved science channels: Animal Planet aired a “fake documentary” about mermaids, and the Discovery Channel misled its viewers into thinking that a large, extinct shark called Megalodon could still be alive.

For scientists and science writers, this is greatly discouraging. How are we supposed to communicate about science in an age when political partisanship and media hype dominate the 24/7 news cycle?

Arthur Lupia gives some advice in the journal PNAS. He highlights two points that he feels are particularly important for scientists and science writers to think about when addressing an audience in a politically charged environment: (1) Finding ways to penetrate people’s limited attention spans and (2) Enhancing credibility in the eyes of the audience.

In regard to the first point, Lupia informs us that humans simply don’t have long attention spans. Walk into any academic seminar, and there’s a good chance that at least one professor and a few grad students will be asleep in the back (and sometimes the front) row. To maximize impact, Lupia suggests that scientists “speak directly to audience members’ affective triggers.” In other words, scientists should try to elicit an emotional response from the audience because they will be more likely to remember the point. Lupia uses sea level rise as an example. People may have a harder time connecting with the abstract concept than with a more concrete example, for instance seeing their favorite beach resort under water. 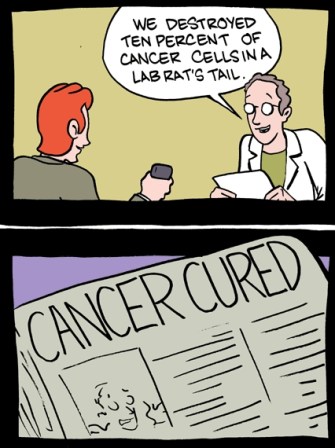 Lupia is both right and wrong. He is correct that science communicators need to make an effort to connect science to people’s everyday lives. In fact, USA Today‘s science writer, Dan Vergano, made a similar point and, in the process, stirred up a little bit of controversy. He claims that science journalists live in a self-imposed ghetto. Why? Because while he “like[s] exploding stars and duck sex as much as the next guy,” simply covering how cool science is (i.e., the “wow” beat) prevents science writers from being taken seriously by editors and other journalists.

Regardless if Vergano’s analysis is correct, he appears to agree with Lupia that science writers need to make science relevant. But is Lupia’s suggestion about appealing to people’s emotions a good strategy? No, not necessarily. In fact, that can be really dangerous.

The media already likes to play with our emotions. As a result, science writers are forced to debunk media hype which leads people to believe that everything causes cancer, miracle vegetables cure diseases, and the Large Hadron Collider will destroy the Earth. If science writers believe that they too should toy with people’s emotions, it’s not a terribly far leap to embracing propaganda-style advocacy. The most infamous example of this is Rachel Carson’s Silent Spring, which was described by University of Wisconsin bacteriologist Ira L. Baldwin as a “prosecuting attorney’s impassioned plea for action.”

We don’t want science journalism to become that.

Lupia’s second point is much better. He suggests that scientists and science writers find ways to enhance their credibility in the eyes of their audience. He says that for an audience to find a scientist or science writer credible, he needs to be perceived as sharing common interests with and having more expertise than them. Lupia relates a fantastic statement by geologist Richard Alley for the TV program Earth: The Operator’s Manual:

I’m a registered Republican, play soccer on Saturday, and go to church on Sundays. I’m a parent and a professor. I worry about jobs for my students and my daughter’s future. I’ve been a proud member of the U.N. Panel on Climate Change and I know the risks. I’ve worked for an oil company, and know how much we all need energy. And the best science shows we’ll be better off if we address the twin stories of climate change and energy. And that the sooner we move forward, the better.

In just a few sentences, Alley very likely proved himself worthy of being listened to by groups who might otherwise be quite skeptical of him. Using this style to approach topics such as evolution, GMOs, vaccines, nuclear power and a whole host of other issues may prove rewarding.

Finally, Lupia makes one other point worth mentioning: “We need not engage in ‘spin,’ manipulation, or ‘dumbing down’ our presentations to communicate more effectively.”

Democracy is in decline, regardless of how we measure it.
Up Next

Riding the Wave of Life: An Interview with Shaun Tomson

Always paddle back out, because it is the only way you’ll ever get that next wave.