What does COVID-19 mean for the energy transition? While lockdowns have caused a temporary fall in CO2 emissions, the pandemic risks derailing recent progress in addressing the world’s energy challenges.

The current state of the sector is described in the World Economic Forum’s Energy Transition Index 2020. It benchmarks the energy systems of 115 economies, highlighting the leading players in the race to net-zero emissions, as well as those with work to do.

With pressure to get idle economies back to “normal”, the short-term shift to a more sustainable energy sector could be in doubt. But the current crisis also presents an opportunity to rethink how our energy needs are met, and consider the long-term impact on the planet.

The past decade has seen rapid transformations as countries move towards clean energy generation, supply and consumption. Coal-fired power plants have been retired, as reliance on natural gas and emissions-free renewable energy sources increases. Incremental gains have been made from carbon pricing initiatives.

Since 2015, 94 of 115 countries have improved their combined score on the Energy Translation Index (ETI), which analyzes each country’s readiness to adopt clean energy using three criteria: energy access and security; environmental sustainability; and economic development and growth.

But the degree of change and the timetable for reaching net-zero emissions differ greatly between countries, and taken as a whole, today’s advances are insufficient to meet the climate targets set by the Paris Agreement. 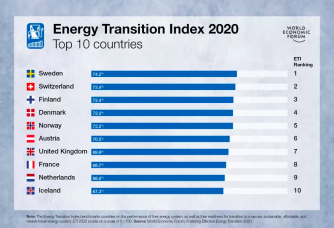 The 10 countries most prepared for the energy transition

Sweden tops the overall ETI ranking for the third consecutive year as the country most ready to transition to clean energy, followed by Switzerland and Finland. There has been little change in the top 10 since the last report, which demonstrates the energy stability of these developed nations, although the gap with the lowest-ranked countries is closing.

The UK and France are the only two G20 economies in the top 10 however, which is otherwise made up of smaller nations.

Powerful shocks Outside the top 10, progress has been modest in Germany. Ranked 20th, the country has committed to phasing out coal-fired power plants and moving industrial output to cleaner fuels such as hydrogen, but making energy services affordable remains a struggle. 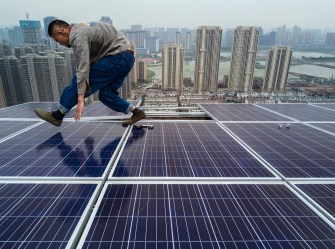 China, ranked 78th, has made strong advances in controlling CO2 emissions by switching to electric vehicles and investing heavily in solar and wind energy – it currently has the world’s largest solar PV and onshore wind capacity. Alongside China, countries including Argentina, India and Italy have shown consistent strong improvements every year. Gains over time have also been recorded by Bangladesh, Bulgaria, Kenya and Oman, among others.

But high energy-consuming countries including the US, Canada and Brazil show little, if any, progress towards an energy transition.

In the US (ranked 32nd), moves to establish a more sustainable energy sector have been hampered by policy decisions. Neighbouring Canada grapples with the conflicting demands of a growing economy and the need to decarbonize the energy sector.

The COVID-19 pandemic serves as a reminder of the impact of external shocks on the global economy. As climate change increases the likelihood of weather extremes such as floods, droughts and violent storms, the need for more sustainable energy practices is intensified.

Policy-makers need to develop a robust framework for energy transition at local, national and international levels, capable of guarding against such shocks.

“The coronavirus pandemic offers an opportunity to consider unorthodox intervention in the energy markets, and global collaboration to support a recovery that accelerates the energy transition once the acute crisis subsides,” says Roberto Bocca, Head of Energy & Materials at the World Economic Forum.

“This giant reset grants us the option to launch aggressive, forward-thinking and long-term strategies leading to a diversified, secure and reliable energy system that will ultimately support the future growth of the world economy in a sustainable and equitable way.”

The biggest nuclear blast in history came courtesy of Tsar Bomba. We could make something at least 100 times more powerful.
Strange Maps

What does the red pill really show you?

Neo’s superhuman powers were only inside of The Matrix. The outside world offered a different reality.