An Oregon aluminum manufacturer has been defrauding NASA for almost twenty years, resulting in failed missions, announced the Department of Justice.

NASA Launch Services Program‘s multi-year investigation revealed that the malfunctions were caused by faulty aluminum. The launch vehicle “fairings” – specialized clamshell structures covering the mission satellites aboard the Taurus XL rocket – failed to separate due to the deficiency of the metal, provided by SPI.

The company’s employees routinely changed inconvenient numbers and violated test standards and specifications, doctoring the speeds of machines used in the testing and utilizing incorrect sample sizes. The wrong information about aluminum extrusions was then employed in the payload fairing rail “frangible joints” by Orbital Sciences Corporation, the rocket’s manufacturer. 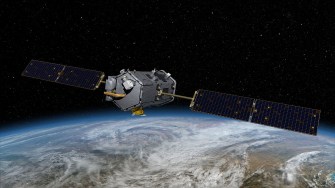 An artist’s concept of the Orbiting Carbon Observatory, which was supposed to study atmospheric carbon dioxide.

The company went as far as using other clients, some being contracted by the government, to provide misleading certifications.

SPI (Hydro Extrusion Portland) is now liable for $46 million in payments, a small price to pay if you consider the $700 million cost of the failed missions attributed to these aluminum defects. Jim Norman, director for Launch Services at NASA Headquarters in Washington, weighed in on the seriousness of the fraud, saying that NASA just can’t possibly test every single component and if suppliers are dishonest, missions could fail.

“In our case, the Taurus XLs that failed for the OCO and Glory missions resulted in the loss of more than $700 million, and years of people’s scientific work, ” explained Norman. “It is critical that we are able to trust our industry to produce, test and certify materials in accordance with the standards we require. In this case, our trust was severely violated.”

U.S. Attorney G. Zachary Terwilliger for the Eastern District of Virginia, commenting for the DOJ, did not mince words either:

“For nearly two decades, SPI and its employees covered up substandard manufacturing processes by brazenly falsifying test results,” said Terwilliger. “They then provided the false test results to hundreds of customers across the country, all to increase corporate profits and obtain production-based bonuses.”

All criminal charges and civil claims against Sapa Profiles Inc. are being resolved with this arrangement. The testing lab supervisor, Dennis Balius, got three years of jail time for his role. The company has been suspended from doing business with the U.S. government since 2015.

The Rubbee X requires almost no setup and is far cheaper than a brand new e-bike.
Up Next
Health

Amid obesity epidemic, many American kids are still ditching water

A new research letter points to another reason for childhood obesity.