Richard Buckminster “Bucky” Fuller, an early 20th-century architect and visionary, believed it was possible to build floating cities called “Cloud Nines.” The cities would be contained within geodesic domes — huge, spherical objects — and they’d be able to float by carefully adjusting the temperature of the interior air. Was it just fantasy? Perhaps. Even though he patented some of the technology and claimed in earnest that building such cities was possible, construction never broke ground (or air).

But what if “Bucky” had access to the Silicon Valley of today — to its startup accelerators, angel investors, and relentless drive to optimize? Could he at least have gotten a decent Kickstarter off the ground?

Today, similarly ambitious plans to transform societies are being dreamt up in Silicon Valley. The main difference is that the gap between fantasy and reality is closing, faster than you may realize.

SpaceX founder Elon Musk said in September that he wants to render all of his company’s vehicles — the Falcon 9, the Falcon Heavy, and the Dragon spacecraft — obsolete. Why? So he can build the BFR (Big Fucking Rocket), more politely known as Interplanetary Transport System.

“All our resources will turn toward building BFR,” Musk said at the International Astronautical Congress. “And we believe we can do this with the revenue we receive from launching satellites and servicing the space station.”

The BFR is intended to transport people to mars, where Musk hopes to build a permanent colony of more than 1 million inhabitants. He thinks the red planet could serve as a “backup drive” for Earth at the cost of $100,000 or $200,000 per person, all of whom would live in an (almost) self-sustaining city.

But exactly how people will survive there over the long term remains unclear. The main thing the SpaceX plan lacks, according to some spaceflight experts, is bioregenerative life support technology, which would take colonists’ breath, liquid waste, and solid waste, and use plants to convert these into food, water, and air. 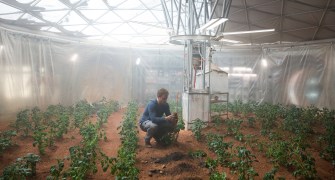 SpaceX hopes to put people on Mars by 2024. But while you have to respect Musk’s superhero-style goals, it’s worth noting that SpaceX has a history of missing its own deadlines.

“Silicon Valley is both a place and an idea,”said Netscape inventor Marc Andreessen.

Imagine if that idea — along with its institution-busting creations like Bitcoin and Uber — spread around the world and gave rise to new Silicon Valleys, creating online societies composed of and run by those with technological know-how.

That vision could lead to "opt-in" societies. Balaji Srinivasan, the co-founder of San Francisco–based genetics company Counsyl, elaborated during a presentation at a Y Combinator event:

“The best part is this, the people who think this is weird, the people who sneer at the frontier, who hate technology, won’t follow you there... We need to run the experiment, to show what a society run by Silicon Valley looks like without affecting anyone who wants to live under the Paper Belt... We need to build opt-in society, outside the U.S., run by technology.”

So far, we've yet to see the formation of this type of techno-utopian society. Still, it's not unimaginable that something like it could form in the coming years – especially if blockchain technologies like Bitcoin continue to gain power and take on a bigger role in the financial sector. As Blockchain expert Toni Lane Casserly said to Big Think:

"I personally believe that the idea of government should be market based. People should be able to opt in and to opt out of systems of governance and the ways that they are able to provide for their people. So governments are actually, what a concept, competing to be better, to take care of their people more than any other government."

By 2030, two thirds of the world will live in cities. Silicon Valley is anticipating that massive, creeping influx by looking into designing "smart cities" that would optimize everything from housing to transportation.

The first phase of this will be a YC Research project. We’ll publicly share our results, and at the end of the process, we’ll decide if it’s something we should pursue and at what exact locations. We’re seriously interested in building new cities and we think we know how to finance it if everything else makes sense.

Some features of a smart city include fleets of driver-less cars (meaning no traffic jams or huge, expensive parking garages), seamless security through facial recognition, interconnected hospitals with shared patient records, and public broadband, to name just a few possibilities.

It'd be a massive undertaking. But given that many cities worldwide are threatened by environmental changes, some might benefit from having Silicon Valley put its city-planning ideas to the test, as Ariel Schwartz writes for Business Insider:

So many of the world's greatest existing cities will have to consider moving inland in the coming years as they're overtaken by water. There will be so much room for new and better infrastructure to be built... Overly ambitious ideas are welcome.

Every robot added to the U.S. economy reduces employment by 5.6 workers, and each robot that is added to the workforce per 1,000 human workers causes wages to drop by as much as 0.25 to 0.5 percent, according to research published at the National Bureau of Economic Research.

In short, the robots are coming for our jobs and we haven't yet ironed out a plan for how we're going to accommodate all the displaced workers. One of the most discussed solutions is universal basic income (UBI), an economic plan that would guarantee every citizen a minimum income no matter what.

When I first began studying #basicincome I concluded we were going to need it tomorrow. With further study I realized we needed it yesterday pic.twitter.com/KcKUpIh5j2

How much? Amounts vary, but something around $12,000 — which would put recipients just above the poverty line, as defined by the federal government — seems plausible, as UBI advocate and writer Scott Santens proposed in a blog post. What's surprising is that the typically hyper-capitalistic Silicon Valley seems to be on board with the idea.

At the 2017 Harvard commencement address, Facebook founder and CEO Mark Zuckerberg suggested UBI could foster a new wave of entrepreneurialism in the country.

“We should explore ideas like universal basic income to make sure that everyone has a cushion to try new ideas,” Zuckerberg said.

Other big names in Silicon Valley have also expressed support for, or at least the acknowledgement for the need of, UBI — Sam Altman, Richard Branson, Elon Musk, Chris Hughes, Bill Gross. And while most echo Zuckerberg's sentiment, there could be a slightly more cynical reason for their endorsement, as author Douglas Rushkoff wrote in an op-ed for the Los Angeles Times:

If they automate all the jobs, who will be left to buy their services? Even the data that companies such as Google mine from our otherwise free online activities would be worthless if we had no money to spend. The penniless have no consumer behavior to exploit.

Based on the word “homesteading,” which means to build homes in new, uninhabited places, seasteading seeks to establish autonomous and sustainable communities on the world’s oceans. It might sound like a fringe idea, but the Seasteading Institute struck a deal this year with the French Polynesian government to build a pilot project community in its national waters in the South Pacific. The institute hopes to begin construction by 2020.

Here are a few key points from a report about the Floating City Project:

The project appears to still be in the works, but early investor Peter Thiel expressed some doubts about its feasibility.

“They're not quite feasible from an engineering perspective,” Thiel told the New York Times. “That's still very far in the future.”

Those engineering challenges are being knocked down, day by day, however, as seasteading expert and co-founder of Blue Frontiers Marc Collins explains:

A futurist sets the stage for the next 1,000 years

We are likely to see the first humans walk on Mars this decade.
The Present

Too few babies — not overpopulation — is likely to be a major problem this century.
Hard Science

The helicopter’s sixth mission almost went down in disaster.
The Future

Here are the top 10 jobs of the future

Say hello to your new colleague, the Workplace Environment Architect.
Up Next
Sponsored

What Do Atheists Hope For?

Is there a certain spiritual component to hope, supported by a belief in a God that can make goals and dreams come true? Or can an atheist be just as hopeful as a religious person?