A minority of public figures are currently pushing an agenda to “open” America for business as soon as possible. Though few in number, they have a relatively large soapbox, making their message seem louder than it is—louder, certainly, than the entirety of medical experts. If their message is heard—and more urgently, implemented—many more Americans will be infected and potentially die. This isn’t speculation or partisan bickering. There is too much precedent that we should have learned from by now.

The urgency that American citizens are feeling is understandable. My wife and I are currently earning 40 percent of what we were just a few weeks ago; many friends and family members are in similar situations. But there is a more urgent question that we need to grapple with as a society: Do we want to shut down our entire health care system, endanger the lives of the people that treat us, and sacrifice untold citizens just to soothe the worried souls on Wall St?

We are now facing a generational question. How we address it will define America moving forward.

Though I haven’t queued up “Contagion” yet, I’ve been reading literature appropriate to this moment. Philip Roth’s Nemesis is one, though two nonfiction books are even more prescient: Reinhold Niebuhr’s 1952 political treatise, The Irony of American History, and Morris Berman’s 2000 cultural studies classic, The Twilight of American Culture.

Niebuhr, a Protestant theologian and political commentator, is most famous for penning the Serenity Prayer. He experienced a resurgence when Barack Obama namechecked him as one of his favorite philosophers. Penning his book just as America was coming to grips with being the dominant world superpower, Niebuhr offers plenty of criticism of Communism. Even more pertinent to our current situation, Niebuhr warns against the arrogance of virtue.

Case in point: Mississippi governor Tate Reeves claiming his state is “never going to be China” in response to why he’s not issuing a shelter in place order, then overriding local orders to reopen “essential” businesses like, well, gun stores while also calling for a statewide abortion ban.

Niebuhr was concerned that since this nation’s founding we have believed in a “deep layer of Messianic consciousness in the mind of America.” The vast power accumulated after World War II triggered a deep-seated belief in American Exceptionalism. To be fair, many countries have similar delusions, but the economic machine we became armed us with the money and military to declare it true. It even seemed to be the case, for a while at least.

As a humble theologian that championed the working class, this singular sentence written nearly 60 years ago perfectly encapsulates everything wrong about our response to our current public health crisis:

“We face the ironic situation that the same technical efficiency which provided our comforts has also placed us at the center of the tragic developments in world events.”

At the time of this writing, America is the third hardest hit country in the world. Given the arc of our curve and the lackluster national response to testing and hospital preparation, we will likely top that list in the next two weeks, if not sooner. We are likely underreporting as it is, given that some tests are not being returned for up to 10 days.

Still, the administrative response focuses on opening businesses stat, not treating the health of the citizenry. Niebuhr noted this tragic tendency as well.

“For we have thus far sought to solve all our problems by the expansion of our economy. This expansion cannot go on forever and ultimately we must face some vexatious issues of social justice in terms which will not differ too greatly from those which the wisest nations of Europe have been forced to use.”

Being a political philosopher with a religious bent, Niebuhr eloquently pulls from his scriptural education to point out the moral failings of political leaders. He writes that arrogance is an inevitable consequence in the relationship between power and weakness, the exact message coming across right now as business leaders pronounce that workers need to get back to their jobs when it is those workers, many in the service industry, that are most likely to be affected by this disease. 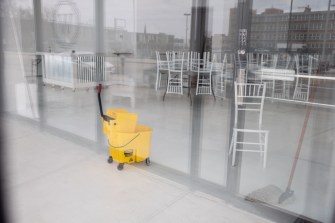 A closed down business is seen in Dayton, Ohio on March 24, 2020 amidst the Coronavirus Pandemic.

Niebuhr doesn’t shy away from criticizing the electorate either. A successful democracy requires a “high degree of literacy among its citizens,” the opposite of what’s occurring now. Proof of point: Snopes shutting down parts of its operations to field all the misinformation circulating about COVID-19. Listing all the errors and falsities I’ve encountered in the last few weeks would require a separate article.

Niebuhr also calls for a sense of dignity among citizens, but even more pertinent to this moment, he writes that every American must also maintain a “sense of his responsibility to a wider community than his family.” This is how democracies succeed, or, if abandoned, fail.

Niebuhr knew that “human limitations catch up with human pretensions.” We should all be alarmed by this mad dash to business as usual. Nothing is normal right now, a fact we should embrace together to work through as a culture. The irony in his book’s title has to do with the fact that man “forgets that he is not simply a creator but also a creature.” As much as we pretend to lord over the world, something invisible to the human eye has, in a few short months, decimated what we call “reality.” This is why Niebuhr espouses humility at every turn, as well as another important skill: “We are more desperately in need of genuine charity than of more technocratic skills.”

Historian and social critic, Morris Berman, measured America’s performance a half-century later. While penned only a generation ago, his insights into our tech-driven world is remarkably clear. He too watched our income curves, which since 1973 have flatlined for workers while favoring CEOs, noting “the affluence of the few is purchased at the misery of the many.”

Berman notes four existential threats that occur during civilizational collapse. They are worth repeating in full:

Like Niebuhr, Berman champions the importance of communities, bonded relationships that knit societies together. And like Niebuhr, he laments the spiritual collapse occurring due to “our increasing inability to relate to one another with a minimum of courtesy or even awareness.”

Twitter wasn’t founded until six years after this book’s publication.

Berman foresaw the civilizational collapse as taking a “century or more,” though tragedies such as the current pandemic speed up the process. In fact, we only need to gaze outside to recognize the signs. The UK announced that home testing for the coronavirus will likely be available next week on the same day a US congressman is unable to even get a test.

Berman is also distraught by the public perception of excellence: a nation that champions athletes as gods while denouncing academics as elitists is woefully misguided. An anti-intellectual strain has, tragically, long been part of our society. Its movement from the fringes to the mainstream is especially troubling when we’re all in desperate need of “elitist” knowledge right now, such as basic biology.

And maybe, just perhaps, we also need a bit of comfort. Humans are social animals. Touch is a basic mammalian need; right now we can’t even do that. At the very least, a successful democracy should not have to endure daily lies about the state of our public health. Disease should never be a political weapon. Biology always wins out.

In the end, both Niebuhr and Berman hold out a sliver of hope for the future of our democracy. And they both knew that it’s up to us to save it.

We’ve never found eight stars bound together in the same stable system. But nature might make it so.The Universe that we have is often more wondrous and bizarre than even our […]