There are special moments in history when the world throws up a torrent of genius. Consider how, in a single century, we have Descartes, Leibniz, and Newton, not to mention Shakespeare, Milton, and Bach. Or how in one generation, someone could hypothetically have met Bismarck, Queen Victoria, Marie Curie, and Edison.

But all of this pales in comparison to what German philosopher Karl Jaspers called the “Axial Age.” It’s here that we find the very origins of why we think the way we do today.

The birth of philosophy

Modern humans have been around for roughly 250,000 years, and we’ve lived in complex societies for at least 6,000 years. That’s a lot of time, with not much going on (other than a lot of walking). Then, within a span of merely six centuries, there’s a huge explosion of thought. From 800 BCE to 200 BCE, all of the major civilizations produced incredible people with incredible ideas. It’s like there was something in the water (more than just parasites).

In Greece, we saw the likes of Socrates, Archimedes, Hippocrates, Plato, and Aristotle. In the Middle East, we got the Jewish prophets like Isiah and Ezekiel, as well as Zoroaster in Persia. In India, we got the Buddha and the writing of the Hindu Upanishads. Whilst in China, Confucianism and Daoism came into their own, as well as the famous Sun Tzu.

The Axial Age gave us the idea that some things in life are infinitely more important than trivial worldly concerns.

It was like nothing seen before, and this is exactly why Jaspers called it “The Axial Age,” where an axis means simply “dividing line.” There was the time before, and then what came after.

Seen up close, these thinkers can seem about as different as chalk and cheese. What could Lao Tzu’s Dao and Aristotle’s Eudaimonia have in common? How are Yahweh and Brahman similar? For Jaspers, when you zoom out a bit and see these thinkers as a whole, there are remarkable commonalities to be found.

The greatest of these is the move toward what’s called “universalism.” Universal truths, universal religion, and universal morals. It’s the idea that there are certain values and rules that ought to apply to everyone, everywhere, no matter the circumstances. 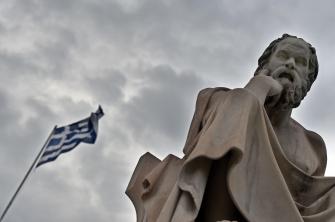 But why then? Why was a very specific 600-year period necessary for the Axial Age to take off? A bit of history helps explain.

The Axial Age was an era where empires expanded outwards to become huge, both in terms of size and population. It was a time of the Persian and Carthaginian empires, the Roman Republic, and the Zhou Dynasty. This means several important things happened:

First, great cities began to form, full of people and ideas, from across vast regions. These urban stews became places where great thinkers could collaborate, debate, and write amazing things. It’s a truth, seen again and again throughout history, that when cultures, ideologies, and peoples come together, great steps forward happen. It’s the eternal allure of the city.

Second, kings were no longer just kings; they were “kings of kings.” Before the Axial Age, it used to be that a ruler, and religion even, was confined to a small area. A king would only have a claim to his particular territory. The Greek gods, even almighty Zeus, were powerless in Kashmir. But this changed with the expansion of empires. Now kings like Alexander and Cyrus (both with the epithet “the Great”) claimed the entire world, and it was no longer enough for gods to be one of many.

Third, with worldly empires becoming so powerful, people came to feel impotent and unimportant. The morals and rules of previous generations were replaced by a new urban decadence. There were no values to live by anymore. And so, ideology and ideas became powerful in themselves. They were the weapons and means by which people could push back against the encroachment of emperors and their armies.

For these reasons, we see that certain common themes emerge from the Axial Age. For instance, in Plato’s Theory of Forms, the Buddha’s Four Noble Truths, and Isaiah’s monotheism, we see a vision of transcendent ideals, which are set over and against the base, immoral, vain efforts of the material world.

The Axial Age was the moment when “Truth” came to stand above whatever worldly “truths” a ruler might push.

The Axial Age laid the foundation for modern thought

Today, we’re the heirs of the Axial Age. It’s in the idea that, no matter how powerful a person or state might be, there are values or norms that cannot be violated. It’s seen in all the major world religions, and it’s seen in the UN Declaration of Human Rights. Any revolution or resistance movement, from the Magna Carta to Marx, is united by the Axial belief that some things matter more than authority alone.

Furthermore, the Axial Age gave us the idea that some things in life are infinitely more important than trivial worldly concerns. Like philosophy.

Why American universities are the best in the world

American universities used to be small centers of rote learning, but three big ideas turned them into intellectual powerhouses.