Generally, we don’t think of anarchists as religious. Anarchists, after all, are anti-authoritarian. What could be more authoritarian than gods and churches? What about the famous anarchist slogan, “No gods, no masters”? There’s good reason to think this way. The majority of anarchists probably are anti-religious, but it would be a mistake to think that all anarchists are not religious. In fact, the philosophies of many major religions have surprising links to anarchy – links that many prominent anarchists have noticed.

Surprisingly, both Christian thinkers and the Bible itself have anarchist leanings. In the Old Testament, Judges 21:25 states, “In those days Israel had no king; everyone did as they saw fit.” Ultimately, though, the Israelites wanted to have a king in order to be like other nations. In the Book of Samuel, God tells Samuel—the eponymous prophet—that there would be major consequences to choosing a king that ends up reading like a laundry list of an anarchist’s worst nightmare. God tells Samuel, “This is what the king who will reign over you will do […] He will take the best of your fields and vineyards and olive groves and give them to his attendants. He will take a tenth of your grain and of your vintage and give it to his officials and attendants. Your menservants and maidservants and the best of your cattle and donkeys he will take for his own use. He will take a tenth of your flocks, and you yourselves will become his slaves.” This doesn’t exactly sound like a fun time. Though Samuel warns the Israelites about this, they ask him to pick a king anyhow; Samuel ultimately picks Saul.

In the New Testament, Jesus’s Sermon on the Mount is sometimes seen through an anarchist lens. Most notably, Leo Tolstoy—widely considered one of the greatest writers of all time—was profoundly influenced by the Sermon on the Mount. Tolstoy, in fact, is arguably one of the foundational figures in Christian anarchism. Tolstoy believed that pacifism was the key takeaway from the Sermon on the Mount—Jesus did say, after all, to turn the other cheek. Because all governments eventually wage war, he believed that this ran counter to Jesus’s teachings and that therefore there should be no governments. Tolstoy also said the Christian church had perverted Jesus’s teachings, ultimately leading to his excommunication.

As mentioned earlier, the Israelites in the Old Testament spent a considerable amount of time without any kind of leadership, only to demand a king later despite God’s warnings. In addition to this mythology, Judaism also has had an anarchist streak throughout its history. While many famous anarchists were Jewish by ethnicity, including Emma Goldman and Noam Chomsky, fewer were explicitly religious anarchists. In addition, while Christian anarchism is an organized movement, Jewish anarchism is not. However, there are still anarchists who connect their political beliefs to religious Judaism, such as the Kabbalist Rabbi Yehuda Ashlag and Rabbi Yankev-Meyer Zalkind, who argued that the ethics of the Talmud closely mirror those of anarchism. Ashlag once wrote, “Indeed, there is nothing more humiliating and degrading for a person than being under [a] brute-force government.”

In fact, anarchy has, in one sense, been a core part of Israel’s history. Though no longer as common nor as anti-authoritarian as they once were, one of Israel’s more interesting communities are the kibbutzim, which are a kind of religious agrarian commune. Kibbutzniks didn’t individually own much property, but rather shared tools, clothing, food, and other property like cars. Outside donations went into a common treasury. Equality was a major concern of the kibbutzim—both women and men engaged in the same kind of work, and children were raised by the community (rather than be seen as a “possession” of the father). While many of the kibbutzim were more about community than religion, with some being even outright anti-religious, others acted as religious schools for their Jewish workers. To anarcho-syndicalists like Noam Chomsky, the kibbutzim represent a model for society. However, modern kibbutzim tend to be less radically anarchist/communist. 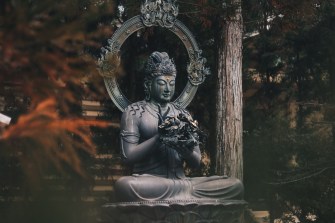 Photo by Manuel Cosentino on Unsplash

Particularly among Western thinkers, Buddhism has often been connected to the tenets of anarchism. Gary Snyder, a poet of the Beat Generation, wrote in his essay Buddhist Anarchism, “Buddhism holds that the universe and all creatures in it are intrinsically in a state of complete wisdom, love and compassion; acting in natural response and mutual interdependence.[…] In the Buddhist view, that which obstructs the effortless manifestation of this is Ignorance, which projects into fear and needless craving. Historically, Buddhist philosophers have failed to analyze out the degree to which ignorance and suffering are caused or encouraged by social factors, considering fear-and-desire to be given facts of the human condition.”

Snyder and others argue that greed, desire, ignorance, and other obstacles to enlightenment are actively encouraged by the state, and therefore the state should be removed and replaced with something better (i.e., anarchism).

Of course, the Beat poets don’t comprehensively represent all of Buddhism. Still, many Buddhist texts express ideas that anarchists would be fond of. For example, the Kalama Sutta tells the story of some villagers who explain to the Buddha that they often come in contact with holy men with seemingly contradictory teachings. So, they ask the Buddha who they should listen to. Rather than give a definitive answer, the Buddha tells them to be critical and question things and people like religious dogma, news sources, experts, authorities, and even oneself. Anarchists can certainly identify with questioning authority (though maybe some could stand to question themselves a bit more).

Similar to the other anarchist takes on Abrahamic religions, Islamic anarchism holds that the only authority one should submit to is God, making human authorities illegitimate. That being said, anarchism has had less of a presence in Islam than in Christianity or Judaism. One of the earliest examples of an anarchist in Islam was a 15th-century revolutionary named Sheikh Bedreddin. Bedreddin argued that all religions were equal and that property should be communal, which ultimately encouraged a 6,000-person revolt against the Ottoman state in 1416.

Though not explicitly anarchist, Ali Shariati, an Iranian intellectual who had a major impact on the Iranian Revolution, argued for a classless society. As a participant in Iran’s anti-monarchy revolution and a vocal critic of Western democracies, one could call Shariati something of an anarchist. He also interpreted Islam through an extremely tolerant lens, considering it to be a religion based on social justice, gender equality, as well as direct democracy. Ultimately, however, the Iranian Revolution did not produce the society he may have hoped for.