Before Bill Clinton was elected president in 1992, he first had to win the so-called “Carville primary” in 1991. The reward for winning this behind-the-scenes contest was the services of the hottest political consultant at the time, James Carville. “The equivalent this time might be the Teddy Goff primary,” writes Al Hunt on Bloomberg, “to earn the assistance of the digital wunderkind who directed social media for the Obama campaign.”

Goff’s online exploits are legendary. In 2012, he raised over $500 million, registered more than a million voters, built a Facebook page with 45 million fans and a Twitter following of 33 million. Shall we go on? Over 100 million video views, signing up hundreds of thousands of volunteers online – it’s fair to say Goff is in the right business. Or is he?

Of course, Goff’s man was re-elected, partly on the strength of the most impressive online fundraising, organizing and communications campaign in the history of politics. And yet, the strategy that Goff devised, and the tools he used to implement it, is broadly transferable.

For instance, how do you get a million and a half people to read a blog post on tax policy? That seems like a tall order. How can tax policy compete with LOL cat videos? As Goff tells Big Think, you are dealing with consumers “who can click away as soon as they don’t like what they’re seeing.” So Goff and his team relied on a simple mantra: don’t be lame.

Not being lame is easier said than done, especially when you’re dealing with a subject that is potentially very dull. However, a little bit of fun can go a long way. A talented digital strategist like Goff sees the Internet not as a marketing challenge, but an opportunity. A traditional campaign might have drafted a white paper or quoted a number of economists who were critical of Romney’s plan. And that might have fit very well in a newspaper ad. But Goff had other ideas. 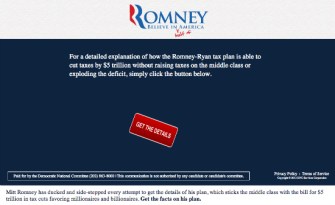 In the video, Goff tells Big Think how he developed a faux-Romney campaign website that promised potential voters details on the Romney tax plan. However, when you attempted to click a button labeled “GET THE DETAILS,” the button moved out of the way of your cursor, as if to dodge the question. After eight seconds of frustration you were finally redirected to a DNC blog post that eviscerated Romney’s tax plan.

As it turns out, people loved it. Goff’s meme garnered over 1.5 million Facebook likes within a day. “It was content that just simply couldn’t have existed before the Internet,” he says.

Could Silkworms Represent The Future Of 3D Printing?

MIT designers laid 6,500 silkworms on top of a specially constructed framework and let them do what they do. Such “biological swarms” could someday be used to “print” structures organically.