In truly historic news, Saudi Arabia has decided to let women drive. The royal decree marks significant progress in the rights of women in the kingdom, which was the only country in the world prohibiting women from driving. The change is predicted to be the catalyst of transformation in the Saudi workforce and societal norms.

Saudi Arabia’s longstanding policy of not allowing women drivers has been a source of controversy over human rights and symbolic of the oppression of women. The change that is slated to take place in the strict Sunni Muslim nation on June 2018 may also benefit Saudi Arabia’s international reputation and boost its economy by growing women’s involvement in the workforce. Previous to the new ruling, Saudi women had to spend much of their money on driver salaries or be driven by male relatives.

The announcement was greeted enthusiastically in Washington, with Heather Nauert, the spokeswoman for the State Department, calling it “a great step in the right direction for that country,” according to the New York Times.

The Times attributes the monumental change to the rising influence of the 32-year-old Crown Prince Mohammed bin Salman, the king’s son. He has made strong efforts to overhaul the kingdom’s society and economy.

Despite this advancement, women in Saudi Arabia still face many restrictions and possible human rights violations. “Guardianship laws” are set up to prevent women from many activities. Every woman in Saudi Arabia has a guardian, called “wali”. Usually, that role goes to a father, a husband or even a son.

Here are 10 things that women of Saudi Arabia still can’t do without male permission:

1. Wear what they want – the dress code is governed by Sharia law, requiring most women to wear a long cloak, called “abaya” and a head scarf.

2. Get married or divorced.

3. Retain custody of their children in a divorce after they reach a certain age (7 for boys, 9 for girls).

4. Interact with men to whom they are not related – the society is very segregated between the sexes and improper mixing could lead to harsh punishment.

10. Get a fair hearing in court – in Saudi Arabia, a woman’s legal position is viewed as that of a minor, with the testimony of one man equaling that of two women .

The decree will allow women to get driver licenses and to drive alone, but it’s not clear yet if they will be permitted to work as professional drivers. Even the police would have to be retrained to interact with women drivers.

Clearly, there’s still a lot of work to be done for women of Saudi Arabia to be treated equally. Saudi Arabia places 141st out of 144 countries on the global gender parity rankings. The United States also places a rather unimpressive 45th. 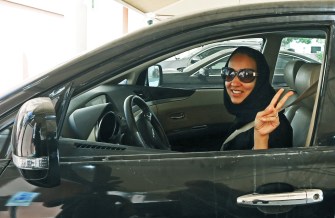 “Today is a rehabilitation to women from 1990 till the moment women can drive. We continue our journey to demand an end to male guardianship,” she wrote.

For more discussion on the importance of improving the rights of women around the world, watch Bill Nye talk how allowing more women access could impact the looming overpopulationcrisis:

A papyrus reveals how the Great Pyramid was built

A newly discovered papyrus contains an eye-witness account of the gathering of materials for the Great Pyramid.